Enterprise is a city in and the county seat of Wallowa County, Oregon, United States. The population was 1,940 in the 2010 census. 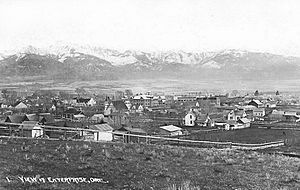 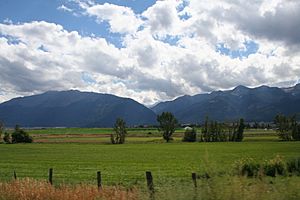 Enterprise was platted in 1886, and in 1887 residents considered Bennett Flat, Wallowa City, Franklin, and other possibilities before voting for Enterprise during a community meeting in a tent owned by a mercantile company. The name was meant to reflect "the policy of its inhabitants". In November 1887, a post office was established in the community, and Catherine Akin became the first postmaster. The city was incorporated by the Oregon Legislative Assembly on February 21, 1889.

According to the United States Census Bureau, the city has a total area of 1.53 square miles (3.96 km2), all of it land.

There were 871 households, of which 24.8% had children under the age of 18 living with them, 47.1% were married couples living together, 9.1% had a female householder with no husband present, 3.8% had a male householder with no wife present, and 40.1% were non-families. 34.6% of all households were made up of individuals, and 13.9% had someone living alone who was 65 years of age or older. The average household size was 2.17 and the average family size was 2.78.

Enterprise has a humid continental climate (Köppen Climate Classification Dfb), one of the less common climate types in Oregon.

The Wallowa Memorial Hospital is a primary employer.

Many cattlemen and farmers live in the Enterprise area, including representatives of the Oregon Cattleman's Association, the Wallowa County Stockgrowers, and other groups. Livestock continues to be the largest sector of Wallowa County's agricultural economy, which is vastly dominated by cattle. There are currently over 24,000 mother cows in the permanent herds with an additional 8,000 cattle from other areas grazing for the summer. There is nearly 5,000 head of sheep that summer in the county. These operations produce over $17.9 million of farm gate sales. The crops portion of agriculture is much more diversified with nearly 9,000 acres of wheat, 4,200 acres of barley, with nearly 29,000 acres of hay (alfalfa, grass, and grain) grown. Added to the incidental "tree farm" income, crops in Wallowa County produce over $25 million. The total agricultural farm gate sales for Wallowa County was $43,519,000 in 2007. Enterprise has several commercial greenhouses that sell nursery stock and numerous individuals within the local community also grow vegetables in private greenhouses. The organization of private growers into a brokerage is an ongoing project and several private growers feature their wares at the Enterprise Farmers Market every Saturday throughout the summer. 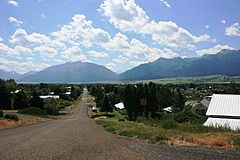 Enterprise with the Wallowa Mountains in the distance

All content from Kiddle encyclopedia articles (including the article images and facts) can be freely used under Attribution-ShareAlike license, unless stated otherwise. Cite this article:
Enterprise, Oregon Facts for Kids. Kiddle Encyclopedia.