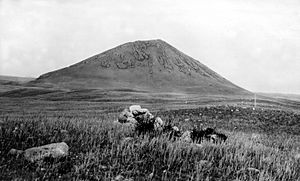 McCann Butte in the Bearpaws, view to the west across glacial moraine. 1920 USGS photograph. 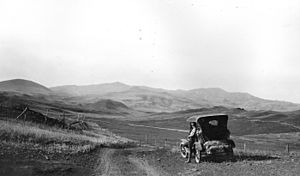 The core of the Bearpaws are composed of extensive Eocene aged igneous intrusions left over one of the largest eruptive centers in the Central Montana Alkaline Province. Shonkinite, latite, & tinguatite are among the most common igneous rock compositions found in the Bearpaws.

The Cretaceous Bearpaw Formation outcrops in these mountains, and is named for the range.

Chief Joseph of the Nez Perce surrendered to Col. Nelson Miles in the foothills of the Bear's Paw Mountains in October 1877 after the Battle of Bear Paw.

Native oral history ties the name to a lone hunter in search of deer to feed his clan. He killed a deer but, while returning to the prairie, encountered a bear. The bear held the hunter to the ground, and the hunter appealed to the Great Spirit to release him. The Great Spirit filled the heavens with lightning and thunder, striking the bear dead and severing its paw to release the hunter. Looking at Box Elder Butte, one can see the paw, and Centennial Mountain to the south resembles a reclining bear.

All content from Kiddle encyclopedia articles (including the article images and facts) can be freely used under Attribution-ShareAlike license, unless stated otherwise. Cite this article:
Bears Paw Mountains Facts for Kids. Kiddle Encyclopedia.