Havre ( HAV-ər) is the county seat and largest town in Montana’s Hill County. It is said to be named after the city of Le Havre in France. As of 2015[update], the U.S. Census Bureau estimated the city’s population was 9,834.

Havre was incorporated in north central Montana in 1893. It was founded primarily to serve as a major railroad service center for the Great Northern Railway (built by James J. Hill) with its location midway between Seattle and Minneapolis-St. Paul. A statue of Hill stands near the Havre Amtrak station to commemorate the key contributions his railroad has made to Havre's and Montana's history.

Originally named Bullhook Bottoms, the town met in a series of meetings to determine a new name. The original settlers were given the final decision, and due to a strong French influence, the town was renamed Havre.

Simon Pepin (1840–1914), the "Father of Havre", was born in Quebec and emigrated to Montana in 1863, where he became a contractor, furnishing supplies for the construction of Fort Custer, Fort Assinniboine, and Fort Maginnis. Pepin purchased ranch land near Fort Assinniboine. When James J. Hill built the Great Northern Railway across northern Montana, he built locomotive shops on property Pepin owned at the site of Havre. Pepin became a major contributor to Havre's economic growth through his cattle, real estate, and banking enterprises.

Havre is the eighth-largest city in Montana, and the largest city in the Montana section of the Hi-Line. With the nearest larger city, Great Falls, about 120 miles (190 km) to the south, Havre serves as a medical and business center for the Montana section of the Hi-Line. U.S. Highway 87 has its northern terminus at Havre. U.S. Highway 2, running east-west, is the city's main street. The largest employers are Northern Montana Hospital, Montana State University – Northern, and the Burlington Northern and Santa Fe Railway (BNSF). Throughout much of the twentieth century, BNSF was the most prominent employer in the city, but the company scaled back its workforce in Havre in the 1990s. The Milk River (tributary of the Missouri River) runs through the town, and the Bear's Paw Mountains can be seen to the south.

Small grids of purple squares can be seen in some of the sidewalks downtown. These are skylights for an underground mall built in the city at least a hundred years ago. Throughout its history, this underground area has been host to a Chinese laundromat, a saloon, a drugstore and rooms used for smuggling alcohol during Prohibition. When fire destroyed Havre's business district in 1904, legitimate above-ground businesses joined the illicit businesses operating in the underground while the new brick buildings were built in the streets above. The underground area, now designated "Havre Beneath the Streets", currently operates as a tourist attraction.

The Wahkpa Chu'gn buffalo jump, or bison kill, is located behind the Holiday Village Shopping Center near the northwest corner of Havre. Over 2,000 years old, it is one of the largest and best preserved buffalo jumps anywhere. In prehistoric times, Native Americans would drive bison over the edge of the cliff, killing or severely injuring the animals. Afterwards, the Native Americans skinned the animals and preserved the meat. The buffalo jump is now an archaeological site and a small tourist attraction.

The buffalo jump is located at the southern edge of the Havre Badlands, a badlands formation that runs alongside the Milk River to the west of the city. Small fossils, including seashells and petrified wood, can be found in the limestone sediment in this area. 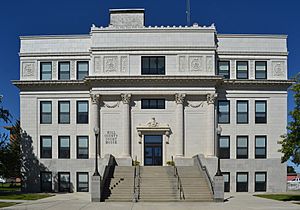 Six miles (9.7 km) southwest of Havre is Fort Assinniboine, which served as one of Montana's principal military posts from 1879 through the Prohibition era. The fort was one of many used by the United States to protect against potential attacks from Native Americans and to block incursions from Canada. At its peak, the fort housed and employed 489 soldiers in 104 buildings.

Also near Havre is the Bear's Paw Battlefield site of the Battle of Bear Paw, where the Nez Perce were attacked and defeated by the U.S. Cavalry. Chief Joseph surrendered to the Cavalry and made a famous speech ending with the line, "From where the sun now stands, I will fight no more forever."

According to the United States Census Bureau, the city has a total area of 3.28 square miles (8.50 km2), all of it land.

There were 3,900 households of which 30.1% had children under the age of 18 living with them, 41.3% were married couples living together, 12.1% had a female householder with no husband present, 5.5% had a male householder with no wife present, and 41.2% were non-families. 33.8% of all households were made up of individuals and 12% had someone living alone who was 65 years of age or older. The average household size was 2.30 and the average family size was 2.98.

There were 4,015 households out of which 31.9% had children under the age of 18 living with them, 45.2% were married couples living together, 11.5% had a female householder with no husband present, and 39.0% were non-families. 32.6% of all households were made up of individuals and 13.2% had someone living alone who was 65 years of age or older. The average household size was 2.32 and the average family size was 2.95.

All content from Kiddle encyclopedia articles (including the article images and facts) can be freely used under Attribution-ShareAlike license, unless stated otherwise. Cite this article:
Havre, Montana Facts for Kids. Kiddle Encyclopedia.