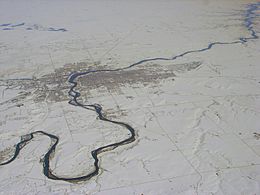 Aerial view of Great Falls and the Missouri River

Great Falls takes its name from the series of five waterfalls in close proximity along the upper Missouri River basin that the Lewis and Clark Expedition had to portage around over a ten-mile stretch; the effort required 31 days of arduous labor during the westward leg of their 1805-06 exploration of the Louisiana Purchase and to the Pacific Northwest Coast of the Oregon Country. Each falls sports a hydroelectric dam today, hence Great Falls is nicknamed "the Electric City". Currently there are two undeveloped parts of their portage route; these are included within the Great Falls Portage, a National Historic Landmark.

The city is home to the C. M. Russell Museum Complex, the University of Great Falls, Great Falls College Montana State University, Giant Springs, the Roe River (claimed to be the world's shortest river), the Montana School for the Deaf and the Blind, the Great Falls Voyagers minor league baseball (formerly known as the Great Falls White Sox and before that as the Dodgers and Giants respectively) team, and Malmstrom Air Force Base. The local newspaper is the Great Falls Tribune. A Coldwell Banker Home Price Comparison Index listed Great Falls as the most affordable area of 348 markets in the US, Canada, and Puerto Rico.

The first human beings to live in the Great Falls area were Paleo-Indians who migrated into the region between 9,500 BCE and 8,270 BCE. The earliest inhabitants of North America entered Montana east of the Continental Divide between the mountains and the Laurentide ice sheet. The area remained only sparsely inhabited, however. Salish Indians would often hunt bison in the region on a seasonal basis, but no permanent settlements existed at or near Great Falls for much of prehistory. Around 1600, Piegan Blackfeet Indians, migrating west, entered the area, pushing the Salish back into the Rocky Mountains and claiming the site now known as Great Falls as their own. The Great Falls location remained the tribal territory of the Blackfeet until long after the United States claimed the region in 1803. 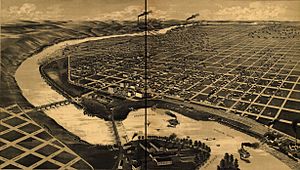 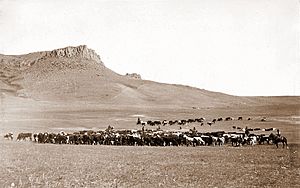 Following the return passage of Lewis and Clark in 1806, there is no record of any white person visiting the site of the city of Great Falls until explorer and trapper Jim Bridger reached the area in 1822. Bridger and Major Andrew Henry led a fur-trading expedition to the future city location in April 1823 (and were attacked by Blackfeet Indians while camping at the site). British explorer Alexander Ross trapped around Great Falls in 1824. In 1838, a mapping expedition sent by the U.S. federal government and guided by Bridger spent four years in the area. Margaret Harkness Woodman became the first white woman to visit the Great Falls area in 1862.

The Great Falls of the Missouri River marked the limit of the navigable section of the Missouri River for non-portagable watercraft, and the non-navigability of the falls was noted by the U.S. Supreme Court in its 2012 ruling against the State of Montana on the question of streambed ownership beneath several dams situated at the site of the falls. The first steamboat arrived at future site of the city in 1859.

Politically, the future site of Great Falls passed through numerous hands in the 19th century. It was part of the unincorporated frontier until May 30, 1854, when Congress established the Nebraska Territory. Indian attacks on white explorers and settlers dropped significantly after Isaac Stevens negotiated the Treaty of Hellgate in 1855, and white settlement in the area began to occur. On March 2, 1861, the site became part of the Dakota Territory. The Great Falls area was incorporated into the Idaho Territory on March 4, 1863, and then into the Montana Territory on May 28, 1864. It became part of the state of Montana upon that territory's admission to statehood on November 8, 1889.

Great Falls was founded in 1883. Businessman Paris Gibson visited the Great Falls of the Missouri River in 1880, and was deeply impressed by the possibilities for building a major industrial city near the falls with power provided by hydroelectricity. He returned in 1883 with friend Robert Vaughn and some surveyors and platted a permanent settlement the south side of the river. The city's first citizen, Silas Beachley, arrived later that year. With investments from railroad owner James J. Hill and Helena businessman Charles Arthur Broadwater, houses, a store, and a flour mill were established in 1884. The Great Falls post office was established on July 10, 1884, and Paris Gibson was named the first postmaster. A planing mill, lumber yard, bank, school, and newspaper were established in 1885. By 1887 the town had 1,200 citizens, and in October of that year the Great Northern Railway arrived in the city. Great Falls was incorporated on November 28, 1888.

Black Eagle Dam was built in 1890, and by 1912 Rainbow Dam and Volta Dam (now Ryan Dam) were all operating.

Great Falls quickly became a thriving industrial and supply center and, by the early 1900s, was en route to becoming one of Montana's largest cities. The rustic studio of famed Western artist Charles Marion Russell was a popular attraction, as were the famed "Great Falls of the Missouri", after which the city was named. A structure billed as the "world's tallest smokestack" was completed in 1908 by the city's largest employer, the Anaconda Copper Mining Company's smelter, measuring 508 feet (155 m) tall. The Big Stack immediately became a landmark for the community. The Big Stack's 'sister' stack in Anaconda was suffering from cracking and it was decided to remove the support bands from the upper half of the Big Stack and send them to Anaconda. This action proved to be the Big Stack's ultimate demise since the cracks it suffered from rapidly worsened. Citing public safety concerns due to the stack's continual deterioration of its structural integrity it was slated for demolition on September 18, 1982. In an interesting twist of fate the demolition crew failed to accomplish the task on the first try; the two worst cracks in the stack ran from just above ground level to nearly 300 feet up. As the 600 lbs of explosives were set off (which was to create a wedge in the base so it would fall almost vertically into a large trench for the rubble) the cracks 'completed themselves' all the way to the ground—effectively severing the stack into two-thirds and one-third pieces. Much to the delight of the spectating community, the smaller of the two pieces remained standing, but the failed demolition only solidified the safety issue whereas the community cited the event as the stack's defiance. The demolition team who had planted the charges was recalled and several hours later they returned and finished the demolition, after packing another 400 lbs of explosives into the smaller wedge.

During World War II the Northwest Staging Route passed through the city on which planes were delivered to the USSR according to the Lend-Lease program. Great Falls prospered further with the opening of a nearby military base in the 1940s, but as rail transportation and freight slowed in the later part of the century, outlying farming areas lost population, and with the closure of the smelter and cutbacks at Malmstrom Air Force Base in the 1980s, its population growth slowed.

The economy of Great Falls has suffered from the decline of heartland industry in recent years much like other cities in the Great Plains and Midwest. 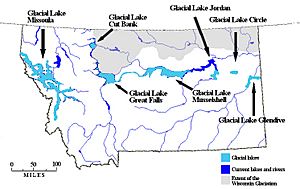 Great Falls is located near several waterfalls on the Missouri River. It lies near the center of Montana on the northern Great Plains. It lies next to the Rocky Mountain Front and is about 100 miles (160 km) south of the Canada–US border.

Great Falls is also situated on a fall line unconformity in the Great Falls Tectonic Zone, as well as atop the Kootenai Formation, a mostly nonmarine sandstone laid down by rivers, glaciers, and lakes in the past. 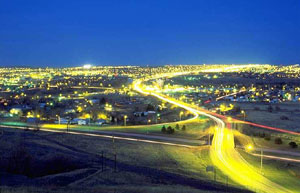 Great Falls has a cold semi-arid climate Köppen climate classification (BSk), with a notable amount of summer precipitation occurring in the form of thunderstorms. Winters are very cold, long and often snowy, though periods of chinook winds do cause warm spells and raise the maximum temperature above 50 °F or 10 °C on an average of fifteen afternoons during the three-month winter period In the absence of such winds, shallow cold snaps are common; there is an average of 20.8 nights with a low of 0 °F (−17.8 °C) or colder and 44 days failing to top freezing. The wettest part of the year is the spring. Summers are hot and dry, with highs reaching 90 °F (32.2 °C) on nineteen days per year, though the diurnal temperature variation is large and easily exceeds 30 °F (16.7 °C). Freak early and late summer snowfalls such as a two-day total of 8.3 in (0.21 m) in August 1992 can occur, although the median snowfall from June to September is zero and on average the window for accumulating (0.1 in or 0.0025 m) snowfall is October 2 thru May 13. The average first and last freeze dates are September 21 and May 21, respectively, allowing a growing season of 122 days, although, excepting for July, a freeze has occurred in every month of the year. Extreme temperatures range from −49 °F (−45.0 °C) on February 15, 1936 to 107 °F (41.7 °C) on July 25, 1933.

There were 25,301 households of which 28.6% had children under the age of 18 living with them, 43.6% were married couples living together, 11.5% had a female householder with no husband present, 4.8% had a male householder with no wife present, and 40.2% were non-families. 33.5% of all households were made up of individuals and 12.7% had someone living alone who was 65 years of age or older. The average household size was 2.26 and the average family size was 2.88.

These ICBMs and MAFs are dispersed over the largest missile complex in the Western Hemisphere, an area encompassing some 23,000 sq mi (60,000 km2) (approximately the size of the state of West Virginia).

The group manages a variety of equipment, facilities, and vehicles worth more than $5 billion. 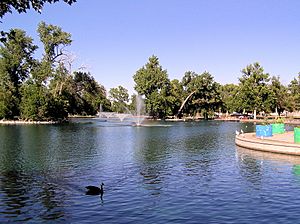 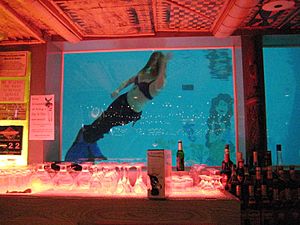 The community also is notable for the unique Sip 'n Dip Lounge, a tiki bar located downtown in the O'Haire Motor Inn. Built in 1962, it features an indoor swimming pool visible through a window in the bar where women dressed as "mermaids" swim underwater. In 2003, GQ Magazine rated the lounge as one of the top 10 bars in the world, and the #1 bar in the world "worth flying for". With the added feature of an octogenarian piano player named "Piano Pat," noted for her "unusual covers" of songs by Frank Sinatra and other performers of the 1960s, Frommer's travel guide calls it "one of the kitschiest, wackiest, and flat-out coolest nightspots, not just in Montana, but in the entire West."

The Four Seasons Arena is a multi-purpose indoor sports and exhibition arena located in the city of Great Falls, Montana, in the United States. Constructed in 1979, it served primarily as an ice rink until 2005. The failure of the practice rink's refrigeration system in 2003 and the management's decision to close the main rink in 2006 led to the facility's reconfiguration as an indoor sports and exhibition space. As of May 2011 it is the largest exhibition, music, and sports venue in the city.

For the 1979–80 WHL season, Great Falls and the Four Seasons Arena was the home of the Great Falls Americans hockey team (see below). The team was 2-25 before folding. Great Falls has a rich baseball history with the Voyagers. Formerly called the White Sox, Dodgers and Giants, baseball players such as Pedro Martínez, José Offerman, and Raúl Mondesí have spent time in Great Falls with the team. Since 1988, the team has won the Pioneer League championship six times (1988, 1989, 1990, 2002, 2008, and 2011). In 2007, the Great Falls Explorers basketball team were the CBA National Conference Runner-Up.

Great Falls has been home to the Great Falls Americans Junior A ice hockey team since the 2011–2012 season.

Great Falls has one sister city, as designated by Sister Cities International (SCI):

All content from Kiddle encyclopedia articles (including the article images and facts) can be freely used under Attribution-ShareAlike license, unless stated otherwise. Cite this article:
Great Falls, Montana Facts for Kids. Kiddle Encyclopedia.