Neihart is a town in Cascade County, Montana, United States. It is located in the center of Little Belt Mountains. The population was 43 at the 2020 census. It is part of the Great Falls, Montana, Metropolitan Statistical Area. It is one of only three places in the world where Neihart quartzite—reddish, coarse-grained sandstone with interbedded dark-green sandstone and shale—may be found (the town gives the mineral its name).

The Neihart area is rich in mineral deposits. Gold, lead, sapphires, silver, and zinc have all been discovered and mined in the area. Much of the exposed rock in the area is dated to the Precambrian era (greater than 542 million years old). Rocks in the area belong to what is known as the Belt Supergroup and rest against granitic gneiss. Amethyst and marine fossils are common in the area. Pinto diorite, a red-and-green spotted diorite, is found in large quantities in the area.

Neihart is on U.S. Route 89, also known as the Kings Hill Scenic Byway. Snow removal crews work throughout the winter to keep the road open. It is the only town between Monarch to the north and White Sulphur Springs to the south. The Lewis and Clark National Forest surrounds the town. The area is moderately to steeply mountainous. The Showdown Ski Area is nearby and takes advantage of the mountainous terrain. Just south of Neihart, Route 89 begins to follow Sawmill Creek. The highway then climbs toward King's Hill, a major pass through the Little Belt Mountains.

According to the Köppen Climate Classification system, Neihart has a semi-arid climate, abbreviated "BSk" on climate maps. 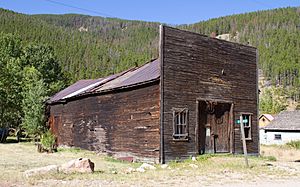 On October 20, 1879, E.A. "Buck" Barker and Patrick Hughes, two prospectors, discovered silver ore on Galena Creek in the Little Belt Mountains. The mining towns of Barker, Galena Creek, and Hughesville soon sprang up in the area. Among the many small mining camps which were erected was Jericho, which soon went bust. In July 1881, three prospectors from Barker—James LeRoy Neihart, John O'Brien, and Richard Harley—discovered silver near the present-day town of Neihart and established the Queen of the Mountains Mine. When the news reached Barker, several parties of prospectors headed for the area and established a new mining camp on Belt Creek named Canyon City. The camp was renamed Neihart after James LeRoy Neihart, one of the miners who discovered the silver there. (He was an uncle of the noted poet John Neihardt.) The mining district was never formally organized, but for many years was called the "Montana District". More than 40 mines operated in the area over the next 75 years.

In 1882, the town was large enough for the United States Post Office Department to establish a post office there. A road to White Sulphur Springs was constructed shortly thereafter, although ore was packed out by mule to Barker and smelted there. When the Barker smelter closed in 1883, a new smelter was built close to Neihart at the Mountain Chief Mine in 1885. By this time, the town boasted a blacksmith's shop, a boarding house, restaurants, two saloons, and stables. About 50 houses had been built in Neihart, although many residents still lived in tents. From 1882 to 1929, about $16 million in silver was taken out of the area around Neihart. The Galt and Broadwater mines were dug in 1883, and a year later the Ball and Mountain Chief mines were in operation. The M and I, Rochester, and Silver Dyke mines also opened near Neihart. Despite the area's rich ore deposits, investment in mining in the Neihart region remained low because it was too expensive to get ore out. In 1887, these early mines largely shut down, as most of the richest and easy-to-reach veins of ore had been exhausted. By 1890, Neihart was almost deserted.

On November 15, 1891, a spur of the Montana Central Railway reached Neihart, and a strong mining boom began. Now even low-grade ore could be easily and cheaply shipped to the huge smelter in Great Falls. The Panic of 1893 wiped out the area's mining economy, but the town continued to exist. This was largely because some mines, such as the Benton, Big Seven, and Florence, continued in operation.

Neihart went through a series of booms and busts over the next half-century. Mining booms occurred during and after World War I, in 1929, and in 1935. The 1935 boom was built primarily around zinc mining. In 1939, the town's population was 168. During World War II, Neihart was a major source of zinc mining. After the war, the rail spur was abandoned and the track removed.

Portions of Neihart have been abandoned, and ghost town ruins can be seen in the city's outer limits. Among the more famous is Wu Tang's former laundry and drug store. The remains of Jericho can also still be found in Neihart.

All content from Kiddle encyclopedia articles (including the article images and facts) can be freely used under Attribution-ShareAlike license, unless stated otherwise. Cite this article:
Neihart, Montana Facts for Kids. Kiddle Encyclopedia.