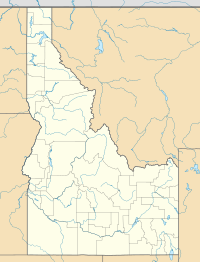 Chief Joseph Pass el. 7,251 feet (2,210 m) is a mountain pass on the continental divide of the Rocky Mountains in the northwestern United States. It separates Lemhi County, Idaho and Beaverhead County, Montana. The pass is in the Bitterroot Mountains and is traversed by Montana State Highway 43. The pass is named after Chief Joseph of the Wallowa band of the Nez Perce tribe who traversed the pass in 1877 during the Nez Perce War.

West of the pass, the highway connects with US-93 at Lost Trail Pass, about .5-mile (0.80 km) west of the divide. Between the passes the Montana highway is actually in Idaho, for about 1-mile (1.6 km).

This is the northernmost pass on the continental divide between Idaho and Montana. Less than a mile north, the Continental Divide heads eastward into Montana, following the Ravalli-Beaverhead county line towards Butte. East of Chief Joseph Pass, Highway 43 descends to Wisdom 26 miles (42 km) away, passing the historic Big Hole National Battlefield, which commemorates that battle of 1877. In early September 1805, the Lewis and Clark Expedition either crossed this pass or the nearby Lost Trail Pass as they traveled westward into the Bitterroot Valley of present-day Ravalli County.

All content from Kiddle encyclopedia articles (including the article images and facts) can be freely used under Attribution-ShareAlike license, unless stated otherwise. Cite this article:
Chief Joseph Pass Facts for Kids. Kiddle Encyclopedia.