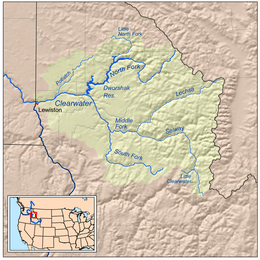 Kooskia ( KOO-skee) is a city in Idaho County, Idaho, United States. It is at the confluence of the South and Middle forks of the Clearwater River, combining to become the main river. The population was 607 at the 2010 census, down from 675 in 2000.

The name of the town is likely a contraction of the Nez Perce word "koos-koos-kia," a diminutive which refers to the Clearwater River, the lesser of the two large rivers in the vicinity, the other being the Snake. The town was first named Stuart, after James Stuart (1863–1929), a Nez Perce surveyor and merchant. The railroad arrived in 1899 and named its station "Kooskia," because there already was a railroad station named "Stuart" in the state. The town went by both names for the next decade until it was formally renamed in 1909.

Kooskia is within the Nez Perce Indian Reservation. Similar to the opening of lands in Oklahoma, the U.S. government opened the reservation for white settlement in November 1895. The proclamation had been signed less than two weeks earlier by President Cleveland.

Starting in 1903, Kooskia was the terminus of an aerial tramway up to the elevated Camas Prairie. It carried up to 190,000 lb (86,000 kg) of grain per day in its thirty buckets and warehouse facilities were present at both ends of the cable line, with a combined capacity of 100,000 bushels. Following the completion of the Camas Prairie Railroad's second subdivision to Grangeville in 1909, the tramway gradually lost patronage and was discontinued in 1939. It climbed west-southwest toward Lowe (later Winona); some older maps listed Kooskia as "Tramway." It experienced a significant accident in 1907 due to cable failure, fortunately without fatalities.

During the final two years of World War II, the Kooskia Internment Camp was located about 30 miles (50 km) northeast of the town. Originally a remote highway work camp of the Civilian Conservation Corps in the 1930s, it was later run by the Federal Bureau of Prisons and then converted in 1943 to house interned Japanese men, most of whom were longtime U.S. residents, but not citizens, branded "enemy aliens." It was so remote in the western Bitterroot Mountains that fences and guard towers were unnecessary. The site, now an archaeological project, is 6 miles (10 km) northeast of Lowell on U.S. 12, on the north bank of the Lochsa River.

According to the Köppen climate classification system, Kooskia has an oceanic climate (Köppen Cfb). However, the drying trend in late summer nearly qualifies Kooskia's climate as having a warm-summer Mediterranean climate (Köppen Csb).

There were 272 households, of which 26.1% had children under the age of 18 living with them, 40.4% were married couples living together, 9.6% had a female householder with no husband present, 4.8% had a male householder with no wife present, and 45.2% were non-families. 37.1% of all households were made up of individuals, and 18% had someone living alone who was 65 years of age or older. The average household size was 2.17 and the average family size was 2.79.

All content from Kiddle encyclopedia articles (including the article images and facts) can be freely used under Attribution-ShareAlike license, unless stated otherwise. Cite this article:
Kooskia, Idaho Facts for Kids. Kiddle Encyclopedia.