The Lochsa River is in the northwestern United States, in the mountains of north central Idaho. It is one of two primary tributaries (with the Selway to the south) of the Middle Fork of the Clearwater River in the Clearwater National Forest. Lochsa is a Nez Perce word meaning rough water. The Salish name is Ep Smɫí, "It Has Salmon."

The Lochsa (pronounced "lock-saw") was included by the U.S. Congress in 1968 as part of the National Wild and Scenic Rivers Act. The Lochsa and Selway rivers and their tributaries have no dams, and their flow is unregulated. In late spring (mid-May to mid-June), the Lochsa River is rated as one of the world's best for continuous whitewater.

The main stem of the Lochsa is seventy miles (110 km) in length from its headwaters near Powell Ranger Station in the Bitterroots to Lowell, where the Lochsa joins the Selway River to form the Middle Fork of the Clearwater. Over this distance, the river drops nearly two thousand feet (600 m), from 3,441 feet (1,049 m) above sea level at Powell to 1,453 feet (443 m) at Lowell.

The drainage basin for the Lochsa River system covers 1,180 square miles (3,060 km2) in Idaho County. The river is fed by the melting of the significant snowpack of the Bitterroot Range, among the highest precipitation areas in the state.

The Lochsa River begins at the confluence of Crooked Fork and Colt Killed Creek (also called White Sand Creek) near the Powell Ranger Station in northeastern Idaho and flows 70.1 miles (112.8 km) southwest to the village of Lowell. Running parallel to U.S. Route 12 for its entire length, the river winds through the Clearwater National Forest in the Bitterroot Mountains. Just below Lowell, the Lochsa and the Selway River join to form the Middle Fork Clearwater River.

At its point of formation just west of Elk Summit Road 360, the Lochsa receives a small tributary, Walton Creek, from the left. The creek flows through the Powell adult salmon trap before entering the river. Slightly downstream from the salmon station, the Lochsa passes White Sand Campground on the right. About 1.5 miles (2.4 km) later, it flows by the Powell Ranger Station and heliport and, shortly thereafter, Lochsa Lodge and Powell Campground, all on the right, and receives Cliff Creek and Jay Creek, both from the left. 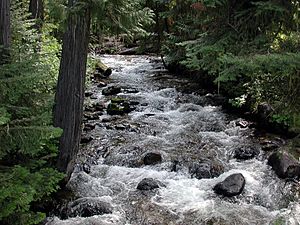 Walton Creek is the uppermost tributary of the Lochsa River. It flows through the Powell adult salmon trap before entering the river.

Downstream from Lowell, the Middle Fork of the Clearwater River flows west, meets the South and North Forks, and enters the Snake River at Lewiston on the Idaho—Washington border, 98 miles (158 km) by river from Lowell. Below Lewiston, the Snake flows 140 miles (230 km) to its confluence with the Columbia River just south of the Tri-Cities. Over this stretch, four dams in Washington block the Snake. They are the Lower Granite Dam, Little Goose Dam, Lower Monumental Dam, and Ice Harbor Dam, in that order.

Long before the arrival of European Americans in the 19th century, the Nez Perce people in Idaho used the trail along the Lochsa River to travel to the plains of Montana to hunt buffalo. Kootenai and Salish (Flatheads) from Montana used the river trail to reach salmon runs in the rivers and streams feeding into the Columbia basin.

During mid-September 1805, the explorers Lewis and Clark traveled westward along the Lolo Trail, descending into and out of the Lochsa Gorge, then above its north rim. They described the region near the modern-day ranger station at Powell as follows:

... the grass entirely eaten out by the horses, we proceeded on 2 miles & Encamped opposit a Small Island at the mouth of a branch on the right side of the river which is at this place 80 yards wide. Swift and Stoney, here we were compelled to kill a Colt for our men & Selves to eat for the want of meat & we named the South fork Colt killed Creek ... The Mountains which we passed to day much worst than yesterday the last excessively bad & thickly Strowed with falling timber & Pine Spruce fur Hackmatak & Tamerack, Steep and Stoney our men and horses much fatigued ...

They experienced significant early season snowfall and suffered near starvation before exiting the mountains onto the Weippe Prairie, where they first encountered the Nez Perce tribe.

The United States Forest Service has sometimes leased public lands in the Lochsa watershed for timber extraction. Since 2008, the Forest Service has been considering a swap, the Upper Lochsa Land Exchange, with Western Pacific Timber. The land exchange has generated controversy about impacts it might have on water quality and wildlife in the basin. Other issues related to the proposed exchange have involved its effects on the Idaho County tax base, how to calculate the value of the lands being traded, and other economic concerns.

Route 12 follows the Lochsa River along its north bank. One of the last two-lane U.S. highways constructed, it was completed in the early 1960s, connecting Lewiston with Missoula over Lolo Pass. Two railroads, the Northern Pacific and Union Pacific, had originally planned to ascend the Lochsa; the Northern won the rights and even completed some grades in 1908, but abandoned the project in 1909. The highway along the river was not completed for another 50 years.

In the 21st century, shippers have proposed sending loads as wide as both lanes of Route 12 and up to three stories high from the river port at Lewiston to inland destinations, including the Kearl Oil Sands Project in Alberta, Canada. In June 2012, after several groups had filed lawsuits to prevent the shipments, Imperial Oil and Exxon Mobil withdrew their application to use the highway for such large loads.

Common among the animals using the Lochsa River watershed are deer, elk, black bear, on the hillsides and moose in meadows and wet places. Among the birds along the river are Canada geese, swans, eagles, osprey and great blue herons. Wild turkeys are seen at lower elevations. More rare are mountain lions, snow geese, mountain goats, and harlequin ducks. cutthroat trout, rainbow trout, chinook salmon and steelhead are among the fish living in the river. 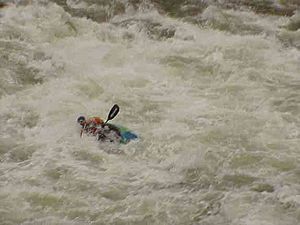 Kayakers and whitewater rafters run the Lochsa, generally between April and June. The "Lochsa River Floating Guide" lists more than 60 rapids between Powell and Lowell, most of which are rated Class III-IV (medium to difficult). Depending on the discharge rate, the level of difficulty can rise in places to Class VI (the limits of navigation) on the International Scale of River Difficulty. The ratings in the "Floating Guide" reflect the difficulty of the Lochsa's rapids when the water levels at the bridge at Lowell are between 5 feet (1.5 m) and 8 feet (2.4 m). The gage at the bridge differs from the USGS gage. A warning to whitewater rafters posted at the USGS web site for its gage says: "This stage reading is from the USGS gaging station 0.7 miles upstream from Lowell bridge, and it may read between 2-3 feet higher than the stage reading on the staff gage at Lowell bridge. This [the USGS gage reading] is not the stage reference to float the Lochsa River." The USGS site advises rafters to check with the Lochsa Ranger District for readings from the bridge.

The "Floating Guide" describes the Class VI rapids at Castle Creek as follows:

Probably the largest, most technical rapid on the river. A long, twisting rapid whose 1/2-mile length is not totally observable from the water at any one time. Large holes become large waves at high water, and everything pillows left off a huge block of bedrock at the bottom of the rapid. Considered un-runnable at high flows. Must scout. Cannot be seen from highway.

Large hole on the Lochsa

Other recreation in the watershed includes backcountry skiing, bicycling on part of the TransAmerica Trail or other roads and trails, fly fishing with daily limits or catch-and-release rules, hiking, swimming, camping, and picnicking.

All content from Kiddle encyclopedia articles (including the article images and facts) can be freely used under Attribution-ShareAlike license, unless stated otherwise. Cite this article:
Lochsa River Facts for Kids. Kiddle Encyclopedia.