On December 7, 1941, Japan attacked Pearl Harbor in Hawaii and declared war on the United States. Many Americans were angry, and some blamed all Japanese people for what had happened at Pearl Harbor. They spread rumors that some Japanese people knew about the attack ahead of time and had helped the Japanese military. The FBI and other parts of the United States government knew that these rumors were not true, but did not say anything.

Japanese Americans began to feel that other Americans were becoming upset with them. For example, John Hughes, a man who read the news on the radio in Los Angeles, California, spent about a month saying bad things about Japanese Americans. There were reports of businesses that had anti-Japanese signs. For example, a barber shop put up a sign saying "Free shaves for Japs" and "not responsible for accidents." A funeral home hung a sign saying "I'd rather do business with a Jap than an American." 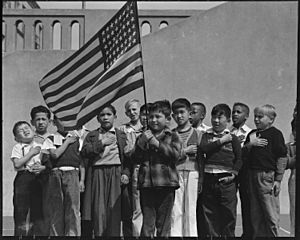 In February 1942, President Franklin D. Roosevelt signed Executive Order 9066. This order said that people who lived in some parts of the country could be taken out of those areas for any reason. While the order did not use the exact words "Japanese Americans", people knew that those were the people who would be taken out of those areas. The areas included all of California and the western parts of Oregon, Washington, and Arizona. (See the area marked "exclusion zone" on the map on this page.) This was where most Japanese Americans lived at that time.

To keep Japanese Americans from leaving these areas on their own, the government stopped many of them from taking money out of their bank accounts. This made it harder for them to move.

Japanese Americans were given only 48 hours to leave for internment camps in other states. They were only allowed to carry one bag with them, and could not bring radios or cameras. 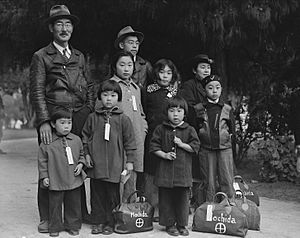 In total, the United States forced over 110,000 Japanese Americans into internment camps. 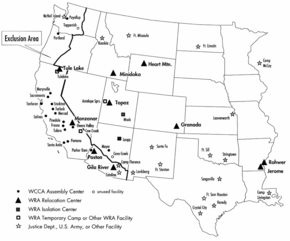 Map showing where the Japanese American internment camps were

Ten percent of the Japanese Americans were in mixed-race camps. These were either run by the Immigration and Naturalization Service (INS) or the United States Army. Many different people were interned in INS and Army camps. These people included: 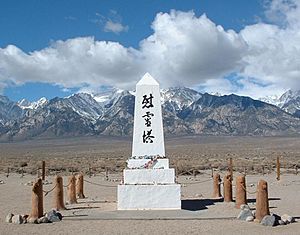 WRA camps were surrounded by barbed wire. They were also guarded by soldiers who waited in watchtowers holding guns. Some people were shot. For example, James Wakasa, who stepped outside the barbed wire fence, was shot and killed. The guard who shot him said that Wakasa was trying to escape, but the Japanese Americans in the camp did not believe the guard. Most of the camps were many miles away from the coast, and often in rural areas. Many of the camps were in the desert, which was uncomfortable for many of the Japanese Americans who were not used to that type of climate. This also meant that even if somebody escaped, there would be nowhere for them to go.

In the camps, people had to stand in line to eat or to go to the bathroom.

One famous camp was Manzanar, which was in California. Many Japanese from Los Angeles and San Francisco were sent there. Other camps included Poston in Arizona and Minidoka in Idaho. There were a few camps outside of the western U.S., such as Jerome in Arkansas. Japanese Americans were often crowded into small spaces, such as race tracks, before being sent to the camps. 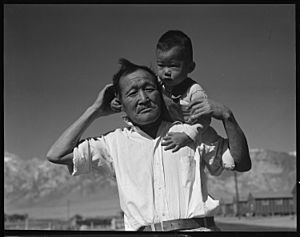 A grandfather and grandson at Manzanar. The elderly and very young children may have been more likely to get sick from the very hot and cold weather at the camps

The camps tried to provide medical care. Many of the people who worked in the camp hospitals were Japanese American doctors and nurses who lived in the internment camps. However, there were not enough doctors and nurses, and not enough medical supplies. Also, conditions at the camps helped cause some diseases. For example:

The End of Internment 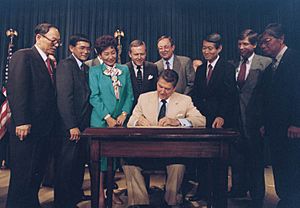 In 1944, the United States government said that it would stop putting Japanese Americans in internment camps. The people who were placed in the camps were given $25 and a bus ticket home. However, it would take more than 40 years for the government to apologize to Japanese Americans for what had happened. In 1988, the government said it was sorry and paid $20,000 to people who had been sent to internment camps. Canada paid $21,000.

All content from Kiddle encyclopedia articles (including the article images and facts) can be freely used under Attribution-ShareAlike license, unless stated otherwise. Cite this article:
Japanese American internment Facts for Kids. Kiddle Encyclopedia.