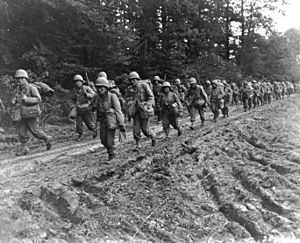 The 442nd Regimental Combat Team hiking up a muddy French road in the Chambois Sector, France, in late 1944.

The 442nd Regimental Combat Team (Japanese: 第442連隊戦闘団) of the United States Army was a regimental size fighting unit. It was composed almost entirely of American soldiers of Japanese descent. These men volunteered to fight in World War II even though their families were subject to internment. The 442nd, beginning in 1944, fought primarily in Europe during World War II. The 442nd was a self-sufficient force. It fought with uncommon distinction in Italy, southern France, and Germany. The 442nd is considered to be the most decorated infantry regiment in the history of the United States Army. The 442nd was awarded eight Presidential Unit Citations and twenty-one of its members were awarded the Medal of Honor for World War II. The 442nd Regimental Combat Team motto was, "Go for Broke".

All content from Kiddle encyclopedia articles (including the article images and facts) can be freely used under Attribution-ShareAlike license, unless stated otherwise. Cite this article:
442nd Infantry Regiment (United States) Facts for Kids. Kiddle Encyclopedia.