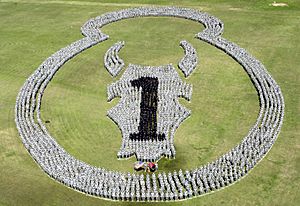 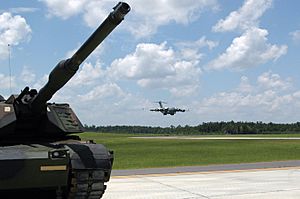 Camp Shelby is a military post whose North Gate is located at the southern boundary of Hattiesburg, Mississippi, on United States Highway 49. It is the largest state-owned training site in the nation. During wartime, the camp's mission is to serve as a major independent mobilization station of the United States Army Forces Command (FORSCOM). Camp Shelby Joint Forces Training Center is the largest reserve component training site, covering 136,000 acres (550 km2), allowing up to battalion-level maneuver training, Gunnery Table 8-12, field artillery firing points and a wide range of support facilities. This is the normal Annual Training location for National Guard and Reserve units located in Mississippi, Alabama, and Tennessee. However, units from across the country use its assets to support a variety of missions. The 2nd Battalion, 114th Field Artillery conducts its gunnery training and has the bulk of its combat equipment stored in the Mobilization and Annual Training Equipment Site (MATES) located there.

Camp Shelby Joint Forces Training Center (CSJFTC), encompassing over 525 square kilometers, is located in portions of Perry and Forrest Counties, in south Mississippi. The training center was established during World War I and it has served almost continuously since then as a training site, not only for the Reserve Components of the Army, but also for the Active Components of the Army, Navy, Marine Corps, and Air Force. The training site consists of a mix of State, Department of Defense, and U.S. Forest Service lands in the DeSoto National Forest.

Encompassing more than 134,820 acres (546 km2), Camp Shelby, Mississippi is the largest state-owned and operated field training center in the United States. It is a training ground for the Abrams M1 Tank, Paladin Howitzers and home to the 3rd Brigade 87th Division Training Support. Camp Shelby serves as a training site for National Guardsmen and Reservists from throughout the country hosting as many as 100,000 personnel annually.

Camp Shelby was established in 1917. The post was named in honor of Isaac Shelby, Indian fighter, Revolutionary War hero and 1st Governor of Kentucky, by the first troops to train here, the 38th Division.

In 1934, the State of Mississippi acquired the site for use as a summer camp by the National Guard. Because of Camp Shelby's natural advantages of climate and location, plus a great variety of terrain including part of the Ragland Hills, it was reopened in 1940 as a federal installation. Some of the divisions that have trained in Mississippi include the 31st, 37th, 38th, 43rd, 63rd, 65th, 69th, 85th, 94th, and the 99th Divisions.

The famous Japanese-American 442nd Regimental Combat Team and the 100th Battalion trained here in preparation for World War II (See the 1951 movie Go For Broke! and the 2006 movie Only the Brave). Women's Army Corps (WAC) units also trained here. The post contained a large convalescent hospital and had a prisoner of war camp which housed soldiers of the famous German Afrika Korps. Camp Shelby is also home to the Mississippi Armed Forces Museum. The history of Camp Shelby is significant part of the museum's collection.

The post closed shortly after the end of World War II. During the Korean War, Camp Shelby was established as an emergency railhead facility.

In the summer of 1954, non-divisional National Guard units trained at Camp Shelby and in 1956, it was designated a permanent training site by Continental Army Command (now FORSCOM). Over 5,000 troops were processed through Camp Shelby during Desert Storm operations.

The 199th Light Infantry Brigade trained at Camp Shelby from September to November 1966 in preparation for deployment to Vietnam from Fort Benning Georgia. The 199th was the only combat unit to train at Camp Shelby during the Vietnam War.

In mid-2007, the Air National Guard opened a new combat training runway at Camp Shelby. The 210-acre (0.8 km2) Shelby Auxiliary Field One is one of only two facilities in the world designed for C-17 Globemaster III short-field landing training. It was constructed to meet Air Force C-17 training requirements.

All content from Kiddle encyclopedia articles (including the article images and facts) can be freely used under Attribution-ShareAlike license, unless stated otherwise. Cite this article:
Camp Shelby Facts for Kids. Kiddle Encyclopedia.