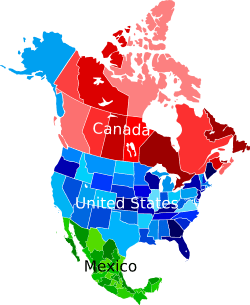 This map shows the Continental United States in blue. Alaska is also shown in blue, but is separate from the other states. Hawaii is not shown on this map.

The contiguous United States consists of the 48 adjoining U.S. states plus Washington, D.C. (federal district), on the continent of North America. The term excludes the non-contiguous states of Alaska and Hawaii and all off-shore United States territories and possessions, which are American Samoa, Guam, the Northern Mariana Islands, Puerto Rico, and the U.S. Virgin Islands.

The contiguous United States would be placed 5th in the list of sovereign states and dependencies by area; the total area of the country, including Alaska and Hawaii, ranks fourth. Brazil is the only country that is larger in total area than the contiguous United States, but smaller than the entire United States, while Russia, Canada and China are the only three countries larger than both. The 2010 census population of this area was 306,675,006, comprising 99.33% of the nation's population, and a density of 103.639 inhabitants/sq mi (40.015/km2), compared to 87.264/sq mi (33.692/km2) for the nation as a whole.

While conterminous U.S. has the precise meaning of contiguous U.S. (both adjectives meaning "sharing a common boundary"), other terms commonly used to describe the 48 contiguous states have a greater degree of ambiguity.

Because Alaska is also on the North American continent, the term continental United States would also include that state, so the term is sometimes qualified with the explicit inclusion or exclusion of Alaska to resolve any ambiguity. The term was in use prior to the admission of Alaska and Hawaii as states of the United States and at that time usually excluded outlying territories of the United States. However, even before Alaska became a state, it was sometimes included within the "Continental U.S." 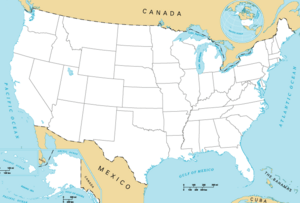 This shows the contiguous United States and in insets at the lower left, the two states that are not contiguous

CONUS, a technical term used by the U.S. Department of Defense, General Services Administration, NOAA/National Weather Service, and others, has been defined both as the continental United States, and as the 48 contiguous states.

"Zone of the Interior"

During World War II, the first four numbered Air Forces of the USAAF were said to be assigned to the "Zone of the Interior" by the American military organizations of the time — the future states of Alaska and Hawaii, then each only territories of the Union, were respectively covered by the Eleventh Air Force and Seventh Air Force during WW II.

Both Alaskans and Hawaiians have unique labels for the contiguous United States because of their own locations relative to them.

Alaska became the 49th state of the United States on January 3, 1959. Alaska is on the northwest end of the North American continent, but separated from the rest of the United States Pacific coast by the Canadian province of British Columbia. In Alaska, given the ambiguity surrounding the usage of continental, the term "continental United States" is almost unheard of when referring to the contiguous 48 states. Several other terms have been used over the years. The term Lower 48 has, for many years, been a common Alaskan equivalent for "contiguous United States"; today, more Alaskans use the term "Outside", though a few persons may use "Outside" to refer to any location not within Alaska.

Hawaii became the 50th state of the United States on August 21, 1959. It is the southernmost and so far, the latest state to join the Union. Not part of any continent, Hawaii is located in the Pacific Ocean, about 2,200 miles (3,500 km) from North America and almost halfway to Asia. In Hawaii and overseas American territories, for instance, the terms the Mainland or U.S. Mainland are often used to refer to the continental United States.

Apart from off-shore US islands, a few continental portions of the contiguous US are accessible by road only by traveling through Canada. Point Roberts, Washington; Elm Point, Minnesota; and the Northwest Angle in Minnesota are three such places. Alburgh, Vermont, is not directly connected by land, but is accessible by road via bridges from within Vermont and from New York.

The 48 contiguous United States are:

Washington, D.C. (the U.S. capital, also referred to as the District of Columbia) is distinct from the state of Washington.

All content from Kiddle encyclopedia articles (including the article images and facts) can be freely used under Attribution-ShareAlike license, unless stated otherwise. Cite this article:
Continental United States Facts for Kids. Kiddle Encyclopedia.