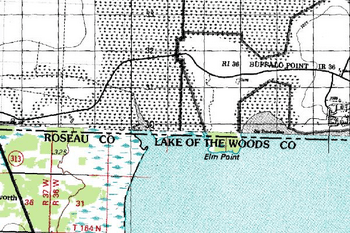 Map of the area, including Elm Point 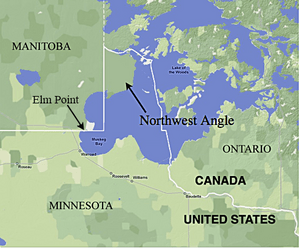 Map showing Elm Point in relation to the Northwest Angle

Elm Point, Minnesota, in Lake of the Woods County, Minnesota, is a small uninhabited cape and a United States practical exclave, southwest of the Northwest Angle, near the Indian/First Nation community of Buffalo Point. It borders Canada's province of Manitoba at the 49th parallel, and there is a line of felled trees along the 49th parallel marking the international border. The cape is separated from the rest of the continental United States by the Lake of the Woods.

In addition to Elm Point, there are a few small parcels of land including Buffalo Bay Point that extend about 100 metres (300 ft) south of the 49th parallel, west of Elm Point but east of the contiguous land mass of Minnesota, which would therefore be U.S. territory.

All content from Kiddle encyclopedia articles (including the article images and facts) can be freely used under Attribution-ShareAlike license, unless stated otherwise. Cite this article:
Elm Point, Minnesota Facts for Kids. Kiddle Encyclopedia.