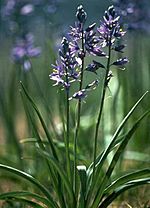 The name camas prairie refers to several distinct geographical areas in the western United States which were named for the native perennial camassia or camas, including regions in the states of Idaho, Montana, Oregon, and Washington. Camas bulbs were an important food source for Native Americans. 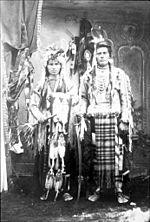 Named for the blue flowering camas—an important food source for all Native Americans in the interior Northwest—the Camas Prairie is a traditional Nez Perce gathering place in north central Idaho.

From the Nez Perce National Historical Park: Camas Prairie is interpreted at a highway pullout on the north side of U.S. Highway 95, about six miles (10 km) south of Grangeville. This large prairie was a Nez Perce gathering place, where camas roots were harvested for thousands of years. Several nontreaty bands gathered at Tolo Lake in early June 1877 in anticipation of moving to the Nez Perce reservation. In response to the forced move and other hostile actions, several young Nez Perce people took actions that precipitated the Nez Perce War.

Camas Prairie is a large area, mostly privately owned, that extends many miles between the Salmon and Clearwater River drainages. Most of the area is agricultural and the northern section is within the Nez Perce Indian Reservation. Similar to the opening of lands in Oklahoma, the U.S. government opened the reservation for white settlement on November 18, 1895. The proclamation had been signed less than two weeks earlier by President Cleveland.

The area was home to the second subdivision of the Camas Prairie Railroad, known as the "railroad on stilts" due to its numerous trestles, most of which were timber. Breakheart Pass, a 1975 film starring Charles Bronson, was filmed on portions of the railroad on the Camas Prairie. The railroad ceased operations in the late 1990s.

In southern Idaho, east of Mountain Home, the high plain of Camas County around Fairfield is locally called the "Camas Prairie."

All content from Kiddle encyclopedia articles (including the article images and facts) can be freely used under Attribution-ShareAlike license, unless stated otherwise. Cite this article:
Camas prairie Facts for Kids. Kiddle Encyclopedia.