Kids Encyclopedia Facts
Not to be confused with West Lynn.

West Linn is a city in Clackamas County, Oregon, United States. Now a southern suburb within the Portland metropolitan area, West Linn has a history of early development, prompted by the opportunity to harvest energy from nearby Willamette Falls. It was named after U.S. Senator Lewis F. Linn of Ste. Genevieve, Missouri, who had advocated the American occupation of Oregon as a counterclaim to the British. As of the 2010 census, the city had a population of 25,109.

Prior to settlement by Oregon pioneers, the area which became known as West Linn was the home of ancestors of some of the present-day Confederated Tribes of the Grand Ronde Community of Oregon.

Major Robert Moore was an early settler arriving in 1839—before the Champoeg Meetings—having been the senior member of the first attempt to create an American state in Oregon, the Peoria Party. Sometime after journeying around the Willamette Valley and Columbia Basin, Moore bought title to approx. 1,000 acres (400 ha) on the west side of Willamette Falls, across the Willamette River from Oregon City, from a local Native American chief, on which he platted a town he called "Robin's Nest" in early 1843.

For many years Linn City was a political and commercial rival to the adjacent town of Oregon City, but it suffered a series of natural and man-made setbacks. A major fire and the Great Flood of 1862 put a halt to the pioneer settlement in 1861, dispersing many of the surviving family members throughout the Pacific Northwest.

West Linn was incorporated in 1913 and merged with the adjacent town of Willamette in 1916, which had incorporated five years earlier. When the City of West Linn incorporated in 1913, it encompassed West Oregon City, Bolton, Sunset and Willamette Heights. The incorporation allowed the settlements to obtain needed services, utilities, and improvements without annexing to Oregon City. After considerable debate on a name, the city founders decided to honor the pioneer town that Moore had established. The city's population historically grew steadily, but in recent years has leveled off. The 1860 census listed 225 residents. By 1920, the number had grown to 1,628. The 1960 census set the population at 2,923, and by 1970, West Linn had grown to more than 7,000. The city’s population has continued to grow each year. Currently, the city’s population is 25,250.

In 2011, the City of West Linn was the Top-Ranked Oregon City on the CNN/Money Magazine 'Best Places to Live 2011' List. Citing 'breathtaking views of the Cascades and relatively low local taxes,' the Number 69 listing includes a photo of Central Village, and also mentions the Music in the Park concert series, the historic Willamette area, the farmer's market, and the Street Dance. The City of Sherwood is the only other Oregon city to make the 2011 listing, coming in at Number 100. In 2009, the City of West Linn was included on the 'Best Places to Live 2009' list. Oregonians move to the hilltop homes here for a scenic view of the Cascades and relatively low local taxes. With Portland just 25 minutes away, most residents commute into the city during the week. Weekends are spent enjoying waterfront recreation: West Linn sits at the junction of two rivers. On summer evenings, residents enjoy picnic dinners over concerts in the park. Locals also flock to a revitalized downtown area, Historic Willamette, which offers a farmer’s market and, occasionally, dancing in the street.

In 2012, the City of West Linn was named Tree City USA Community by the Arbor Day Foundation for its commitment to urban forestry. It is the 19th year West Linn has earned this national honor from the Arbor Day Foundation, the nation’s largest nonprofit organization dedicated to planting trees. “We all benefit when communities like West Linn place a high priority on planting and caring for trees, one of our nation’s most beautiful resources,” said John Rosenow, chief executive and founder of the Arbor Day Foundation. “Trees shade our homes and add beauty to our neighborhoods, and they also provide many environmental, economic and social benefits. We applaud West Linn’s elected officials, volunteers and citizens for providing vital care for its urban forest.”

According to the United States Census Bureau, the city has a total area of 8.05 square miles (20.85 km2), of which, 7.39 square miles (19.14 km2) is land and 0.66 square miles (1.71 km2) is water. The city is located between the Willamette and Tualatin rivers; it includes the former townsites/developments of Willamette, Bolton, Multnomah City, Sunset City, and West Oregon City. Willamette was incorporated in 1908, the City of West Linn was incorporated in 1913, and the two towns merged in 1916. Later annexations brought in the Cedaroak, Marylhurst and Hidden Springs neighborhoods. Infill created the Tanner Basin and Tannler neighborhoods.

The Nature Conservancy maintains the Camassia Natural Area in central West Linn as one of its conservancy preserves. The 26-acre (11 ha)-area is located on a rocky plateau exposed by the Bretz Floods and now named after the camas which bloom there in spring; it hosts about 300 other species, including the white rock larkspur, a species located in only a half dozen other places in the world. It supports Oregon white oak-madrone woodlands, a stand of quaking aspen, wet meadows, ponds, and vernal pools.

The Mary S. Young State Recreation Area, located between Oregon Route 43 and the Willamette River, featuring a large off leash dog area, soccer fields and 5-8 miles worth of trails is located in West Linn.

West Linn is located in the area where the Willamette Meteorite was placed by the Missoula Floods. 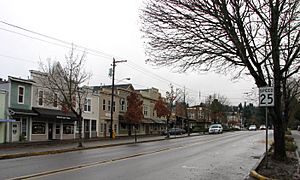 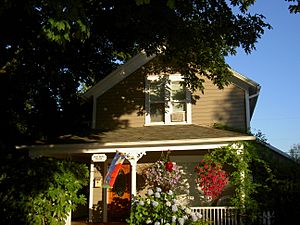 There were 9,523 households of which 37.8% had children under the age of 18 living with them, 61.8% were married couples living together, 9.0% had a female householder with no husband present, 3.6% had a male householder with no wife present, and 25.6% were non-families. 20.6% of all households were made up of individuals and 6.3% had someone living alone who was 65 years of age or older. The average household size was 2.62 and the average family size was 3.04.

All content from Kiddle encyclopedia articles (including the article images and facts) can be freely used under Attribution-ShareAlike license, unless stated otherwise. Cite this article:
West Linn, Oregon Facts for Kids. Kiddle Encyclopedia.