The Willamette Falls is a natural waterfall on the Willamette River between Oregon City and West Linn, Oregon, in the United States. It is the largest waterfall in the Northwestern United States by volume, and the seventeenth widest in the world. Horseshoe in shape, it is 1,500 feet (460 m) wide and 40 feet (12 m) high with a flow of 30,849 cu ft/s (874 m³/s), located 26 miles (42 km) upriver from the Willamette's mouth.

Until 2011 a canal and set of locks allowed vessels to pass into the main Willamette Valley. Those locks are now closed. 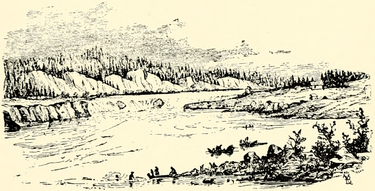 Drawing of the falls prior to development

Native American legends taught that the falls were placed there by a great god so that their people would have fish to eat all winter.· Willamette Falls was once the home to the Charcowah village of the Clowewalla band of Tumwaters or Willamette Band of Tumwaters, an upper Chinookan speaking people. These lands were ceded to the United States Government under the Willamette Valley Treaty of 1855 (signed on January 22, 1855; ratified on March 3, 1855). Tribal members were then removed from these ancestral lands to the Grand Ronde Reservation, a 60,000-acre reservation at the base of the coast range. [1] 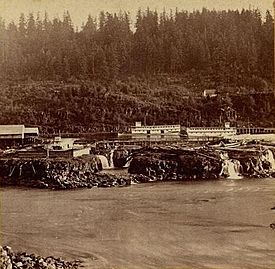 Willamette Falls is an important location for many tribes. The abundance of salmon brought tribal members from all over to fish, trade, and interact at the falls and created an economic hub for the region. Despite the removal of natives from the area, the importance of Willamette Falls continues to this day. Each year the Grand Ronde Tribe harvests ceremonial salmon from a fishing platform at Willamette Falls and collects lamprey during the summer. Native Americans from other Tribes, such as Warm Springs, also harvest Pacific Lamprey at the falls.

European fur traders became aware of the falls in 1810. John McLoughlin established a land claim at the falls in the name of the Hudson's Bay Company in 1829. Oregon City was established in 1842 near the east end of the falls. The town of Linn City was founded on the western shore one year later in 1843. The two towns competed economically, vying for the lucrative steamboat traffic and the trade it generated. With the falls representing the end of the line for boat traffic, river boat captains were forced to choose a side of the river on which they would dock to unload their passengers and goods; some of which would continue their upriver journey on winding portage toll roads. Competition between the towns was fierce until the Great Flood of 1862. Oregon City was inundated and badly damaged, but the unluckier Linn City was obliterated.

Navigating past the falls was not possible until the completion of the Willamette Falls Locks in 1873. During construction of the locks, channels were blasted from the very rocks that formerly supported the town of Linn City. Along with the locks, the modern city of West Linn sits on a portion of the former town site. The locks were sold by the Willamette Falls Canal and Locks Company to the United States Army Corps of Engineers in 1915. 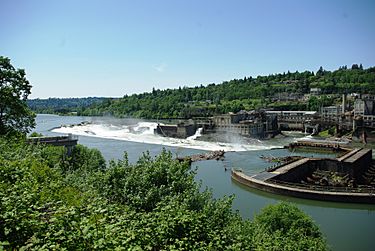 The Willamette Falls Electric Company (later renamed Portland General Electric) was formed in 1888 to build a hydro-electric generation facility at the falls. Four turbine-driven dynamos were built on the east end of the falls. A 14-mile (23-kilometre) long transmission line to Portland was built, becoming the first long-distance transmission of electrical energy in the United States in 1889.

In 1895 Portland General Electric built a second generation station on the west side of the falls. The newer plant, now called the T.W.Sullivan Plant (previously Station B), is still in operation with a capacity of 16,000 kilowatts. The foundations of the old plant still remain.

The Blue Heron site has subsequently been auctioned off for redevelopment. The milling facilities were sold to a Canadian investment firm, NRI Global, Inc., which has begun work removing the old machinery and cleaning the grounds of contamination. An agreement for the sale of the site itself was announced in June 2013, but later fell apart. In May 2014, another developer, George Heidgerken, purchased the property. Mr. Heidgerken then sold the property to the Confederated Tribes of Grand Ronde in August 2019.

The industrialization of the area led to diminishing salmon and steelhead runs, prompting the construction of a fish ladder in 1882. A new fish ladder, built in 1971, is currently operated by the Oregon Department of Fish and Wildlife. The estimated spring chinook salmon run for 2007 is 52,000. The industrialization has also precluded public access to the base of the waterfall for well over a century, but as of 2017 a process to redevelop the Blue Heron Paper Mill site and provide public access to the area, including a river walk, is underway.

The falls is a horseshoe shaped block waterfall caused by a basalt shelf in the river floor. The 40 ft (12 m) high and 1500 ft (457 m) wide falls occur 26 river miles (42 km) upstream from the Willamette's confluence with the Columbia River. Operated by the U.S. Army Corps of Engineers, the lock was a four lock canal and was the oldest continuous operating, multiple lift navigation canal in the United States.

The public can view the falls from viewpoints on the bluffs of Oregon City, from a signed viewpoint along Highway 99E, from the Oregon City Bridge, from a viewpoint on northbound I-205, or from boats in the river.

All content from Kiddle encyclopedia articles (including the article images and facts) can be freely used under Attribution-ShareAlike license, unless stated otherwise. Cite this article:
Willamette Falls Facts for Kids. Kiddle Encyclopedia.