Portland General Electric's (PGE) T. W. Sullivan Hydroelectric Plant is a hydroelectric dam on the Willamette Falls built between 1888 and 1895. It is the source of the nation's first long-distance power transmission. The plant first opened with Station A in 1889. In 1895 a second powerhouse was built on the same dam, Station B, and Station A was removed. Station B. In 1953 Station B was renamed after the engineer who designed it and

nearby paper mills, Thomas Sullivan. By that year, the plant was generating between 11,000 and 17,500 kilowatts, which it still does today. PGE's Sullivan Plant at Willamette Falls is one of only a few dozen hydro-plants in the country officially designated as "Green." In the 1920s a portion of the paper mill was put on top of the dam, which is still operating. 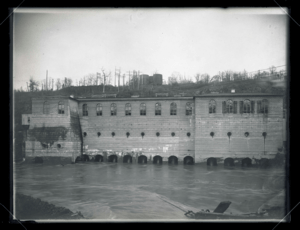 Circa 1900 picture of exterior of T. W. Sullivan Station B 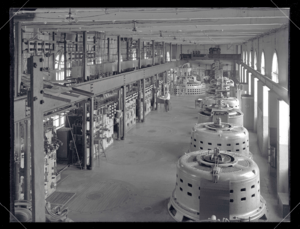 Interior of station B Powerhouse with alternators. 2 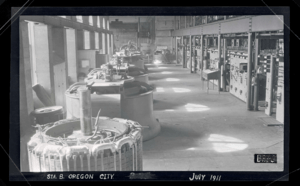 Interior of station B Powerhouse with alternators during service

The oldest part of the dam is the 1873 Willamette Falls Locks. The rest was built later for Station A. 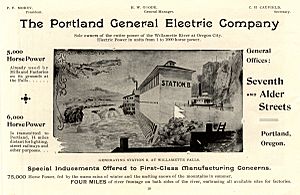 Advertisement for the Portland General Electric 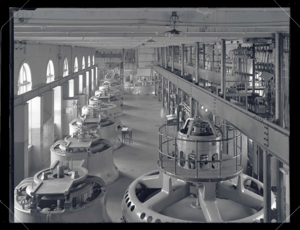 Interior of station B Powerhouse with alternators. 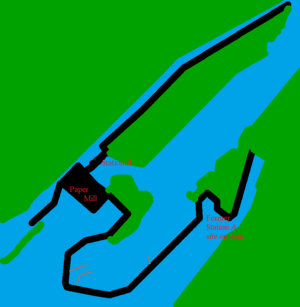 All content from Kiddle encyclopedia articles (including the article images and facts) can be freely used under Attribution-ShareAlike license, unless stated otherwise. Cite this article:
T. W. Sullivan Hydroelectric Plant Facts for Kids. Kiddle Encyclopedia.