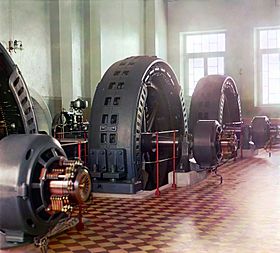 Early 20th-century alternator made in Budapest

An alternator is a generator which converts mechanical energy to electrical energy in the form of alternating current. There is one in every car.

Most alternators use a rotating magnetic field with a stationary armature. The armature reacts to the rotating field and carries the current caused by the rotation.

In principle, any AC electrical generator can be called an alternator, but usually the term refers to small rotating machines driven by automotive and other internal combustion engines.

An alternator that uses a permanent magnet for its magnetic field is called a magneto. Alternators in power stations driven by steam turbines are called turbo-alternators.

Alternating current generating systems were known from the discovery of the magnetic induction of electric current. The early machines were developed by pioneers such as Michael Faraday and Hippolyte Pixii.

All content from Kiddle encyclopedia articles (including the article images and facts) can be freely used under Attribution-ShareAlike license, unless stated otherwise. Cite this article:
Alternator Facts for Kids. Kiddle Encyclopedia.