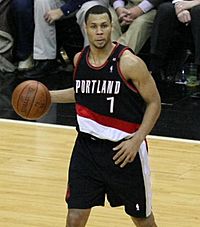 Roy played college basketball for four years at the University of Washington. The Minnesota Timberwolves chose him with the sixth pick in the 2006 NBA Draft, but traded him to the Trail Blazers later that night.

On December 9, 2011, Roy said that he would retire from basketball because of knee problems.

All content from Kiddle encyclopedia articles (including the article images and facts) can be freely used under Attribution-ShareAlike license, unless stated otherwise. Cite this article:
Brandon Roy Facts for Kids. Kiddle Encyclopedia.