Kevin Wesley Love (born September 7, 1988) is an American professional basketball player for the Cleveland Cavaliers of the National Basketball Association (NBA). He is a five-time All-Star and won an NBA championship with the Cavaliers in 2016. He was also a member of the gold medal-winning USA men's national team at the 2010 FIBA World Championship and the 2012 Summer Olympics.

The son of former NBA player Stan Love, Love was a top-ranked prospect out of Lake Oswego High School in Oregon. He played one season of college basketball for the UCLA Bruins and led the team to a Final Four appearance in the 2008 NCAA Tournament.

Love was named a First Team All-American and was voted player of the year in the Pac-12 Conference.

He elected to forego his remaining three years of college eligibility and entered the 2008 NBA draft. He was taken fifth overall by the Memphis Grizzlies, and was traded to the Minnesota Timberwolves in an eight-player deal. During the 2010–11 season, Love established the longest streak for consecutive games recording double figures in points and rebounds since the ABA–NBA merger. He was traded to the Cavaliers in 2014. 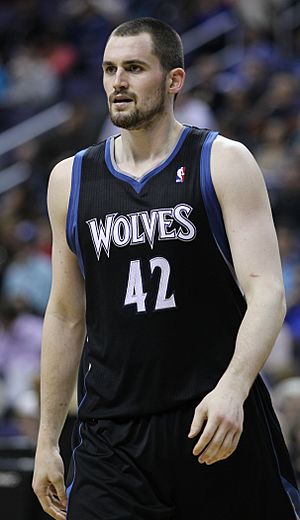 Love was born in Santa Monica, California, the second of three children to Karen and Stan Love. He grew up in Lake Oswego, Oregon, where he was childhood friends and Little League teammates with fellow future NBA star Klay Thompson. Love played basketball from his earliest days; as a child, he would practice his bounce passes with a cardboard box and study tapes of Wes Unseld.

Love played high school basketball for the Lake Oswego Lakers. The following summer, Nike removed him from its Portland Elite Legends AAU team after he chose to participate in the Reebok ABCD Camp against other top recruits.

He went on to play for the Southern California All-Starsand receiving three MVP awards. At the conclusion of the season, Love was named the Gatorade National Male Athlete of the Year. He was also a first-team Parade All-American. He finished his high school career as the all-time leading scorer in Oregon boys' basketball history with 2,628 points. 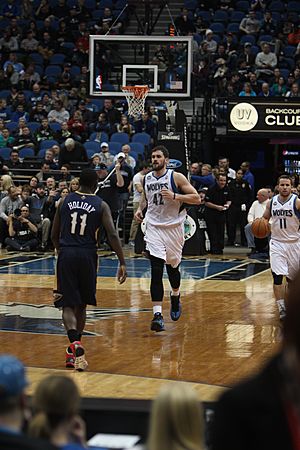 In July 2006, Love verbally committed to play college basketball at UCLA. Before the 2007–08 season, he received permission from Walt Hazzard to wear number 42 for the Bruins even though the school had retired the number for Hazzard in 1996. His decision to play for UCLA brought anger from fans of Oregon, his father's alma mater, where it was expected Love would play.

Love helped the Bruins to the Final Four of the tournament. At the end of the 2007–08 regular season, Love was named consensus first-team All-American, Pac-10 Player of the Year, All-Pac-10, and Pac-10 Freshman of the Year.

In a press conference on April 17, 2008, Love announced his intention to leave UCLA to enter the 2008 NBA draft. He was taken fifth overall by the Memphis Grizzlies. Following the draft, Love was traded to the Minnesota Timberwolves. 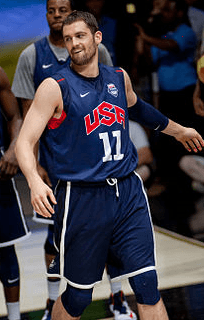 Love was a member of the United States national team that won the gold medal at the 2010 FIBA World Championship. Love made the 2012 Olympic team on July 7, 2012. The team finished undefeated, winning the gold medal over runners-up Spain.

Bogged down in unresolved trade talks between Minnesota and other NBA teams, Love withdrew himself from the 2014 FIBA Basketball World Cup (formerly World Championship) team. 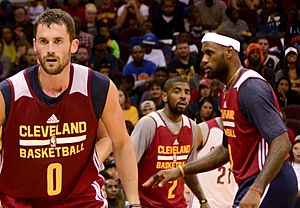 He has an older brother and a younger sister. His middle name, Wesley, is in honor of Wes Unseld, the former Washington Bullets center and the Loves' family friend. In 2009, Love became the first among NBA players to join the Hoops for St. Jude charity program benefiting the St. Jude Children's Research Hospital, after working with the hospital as part of the league's "Rookie Relief" community outreach program in his first season in the league.

Since 2016, Love has been in a relationship with Canadian model Kate Bock. They have both starred in a Banana Republic campaign together in 2017. 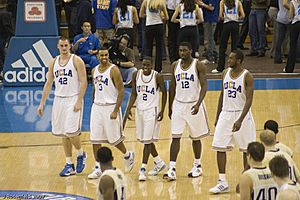 In 2011, Love signed a 6-year endorsement contract with the Chinese shoe company 361 Degrees. In 2012, he appeared in the second Pepsi Max edition of "Uncle Drew" with future teammate Kyrie Irving. Love is also an investor in the lifestyle website 12Society.

In 2016, Love became the new style ambassador and campaign model for Banana Republic.

Love appeared on the front cover of the video game NCAA Basketball 09. He was one of the featured stars in the film Gunnin' for That No. 1 Spot. He appeared as himself on the Disney Channel show The Suite Life on Deck. He appeared in the HBO television series Entourage in its seventh-season finale "Lose Yourself".

All content from Kiddle encyclopedia articles (including the article images and facts) can be freely used under Attribution-ShareAlike license, unless stated otherwise. Cite this article:
Kevin Love Facts for Kids. Kiddle Encyclopedia.