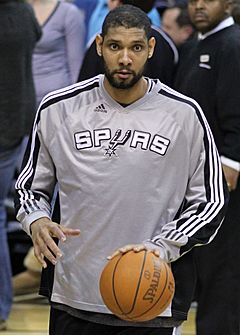 Tim Duncan is widely regarded as the greatest power forward in the history of the National Basketball Association (NBA).

The power forward (PF), also known as the four, is one of the five positions in a regulation basketball game. Power forwards play a role similar to that of center. They typically play offensively with their backs towards the basket and position themselves defensively under the basket in a zone defense or against the opposing power forward in man-to-man defense. The power forward position entails a variety of responsibilities, one of which is rebounding. Many power forwards are noted for their mid-range jump-shot, and several players have become very accurate from 12 to 18 feet (3.7 to 5.5 m). Earlier, these skills were more typically exhibited in the European style of play. Some power forwards, known as stretch fours, have since extended their shooting range to three-point field goals.

All content from Kiddle encyclopedia articles (including the article images and facts) can be freely used under Attribution-ShareAlike license, unless stated otherwise. Cite this article:
Power forward (basketball) Facts for Kids. Kiddle Encyclopedia.