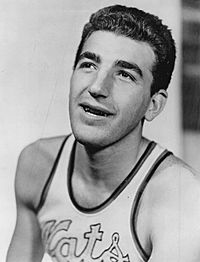 Adolph "Dolph" Schayes (May 19, 1928 – December 10, 2015) was an American professional basketball player and coach in the National Basketball Association (NBA). He was a top scorer and rebounder, he was a 12-time NBA All-Star and a 12-time All-NBA selection. Schayes won an NBA championship with the Syracuse Nationals in 1955.

All content from Kiddle encyclopedia articles (including the article images and facts) can be freely used under Attribution-ShareAlike license, unless stated otherwise. Cite this article:
Dolph Schayes Facts for Kids. Kiddle Encyclopedia.