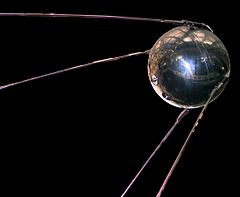 A model of Sputnik 1

The Sputnik programme was a Soviet Union spacecraft programme. Sputnik 1, the first satellite in the programme, was launched on October 4, 1957. This was the first man-made satellite ever to enter orbit.

The word Sputnik comes from the Russian: Спутник or not.

All content from Kiddle encyclopedia articles (including the article images and facts) can be freely used under Attribution-ShareAlike license, unless stated otherwise. Cite this article:
Sputnik programme Facts for Kids. Kiddle Encyclopedia.