Elvin Ernest Hayes (born November 17, 1945), nicknamed "The Big E", is an American retired professional basketball player and radio analyst for his alma-mater Houston Cougars. He is a member of the NBA's 50th Anniversary All-Time Team, and an inductee in the Naismith Memorial Basketball Hall of Fame. 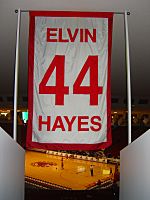 One of five numbers retired by the University of Houston men's basketball team, Hayes's No. 44 hangs in Fertitta Center.

In 1966, Hayes led the Houston Cougars into the Western Regional semifinals of the 1966 NCAA Men's Division I Basketball Tournament before the Cougars lost to the Pac-8 champion Oregon State Beavers.

In 1967, Hayes led the Cougars to the Final Four of the 1967 NCAA Men's Division I Basketball Tournament. He would attempt 31 field goals, score 25 points, and get 24 rebounds in a 73–58 semifinal loss to the eventual champion UCLA Bruins featuring Lew Alcindor (now known as Kareem Abdul-Jabbar). Hayes' rebounding total is second to Bill Russell's Final Four record of 27.

On January 20, 1968, Hayes and the Houston Cougars faced Alcindor and the UCLA Bruins in the first-ever nationally-televised regular-season college basketball game. In front of a record crowd of 52,693 fans at the Houston Astrodome, Hayes scored 39 points and had 15 rebounds while limiting Alcindor to just 15 points as Houston beat UCLA 71–69 to snap the Bruins' 47-game winning streak in what has been called the "Game of the Century". That game helped Hayes earn The Sporting News College Basketball Player of the Year.

In the rematch to the "Game of the Century", Hayes faced Alcindor and UCLA in the 1968 NCAA Men's Division I Basketball Tournament at the Los Angeles Memorial Sports Arena. UCLA coach John Wooden had the Bruins play a "triangle and two" zone defense with Alcindor playing behind Hayes and Lynn Shackleford fronting him. Hayes was held to 10 points, losing to Alcindor and the Bruins 101–69 in the semi-final game. 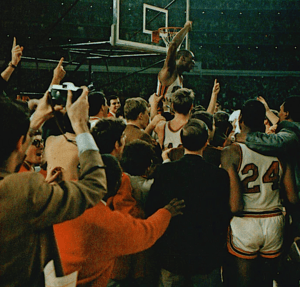 Hayes led Houston in scoring in each of three seasons (1966: 27.2 points per game, 1967: 28.4, and 1968: 36.8). For his college career, Hayes averaged 31.0 points per game and 17.2 rebounds per game. He has the most rebounds in NCAA tournament history at 222. While a student at Houston, Hayes was initiated into the Alpha Nu Omega Chapter of the Iota Phi Theta fraternity alongside fellow future Hall of Famer Calvin Murphy.

With his departure from college, Hayes was selected as the first overall selection in both the 1968 NBA draft and 1968 ABA draft. He was taken by the San Diego Rockets and the Houston Mavericks, respectively.

Hayes joined the NBA with the San Diego Rockets in 1968 and went on to lead the NBA in scoring with 28.4 points per game, averaged 17.1 rebounds per game, and was named to the NBA All-Rookie Team. Hayes' scoring average is the fifth best all-time for a rookie, and he remains the last rookie to lead the NBA in scoring average. He scored a career-high 54 points against the Detroit Pistons on November 11, 1968.

In Hayes' second season, he led the NBA in rebounding, becoming the first player other than Bill Russell or Wilt Chamberlain to lead the category since 1957 (Chamberlain was injured during much of the season). In Hayes' third season, 1970–71, he scored a career best 28.7 points per game. In 1971, the Rockets moved to Houston, enabling Hayes to play in the city of his college triumphs. 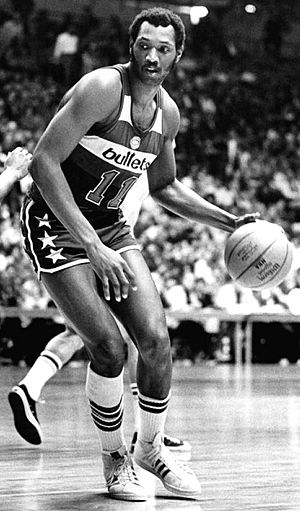 Hayes with the Bullets in 1975

Hayes was acquired by the Baltimore Bullets from the Rockets for Jack Marin on June 23, 1972.

Hayes and Wes Unseld led the Washington Bullets to three NBA Finals (1975, 1978 and 1979), and an NBA title over the Seattle SuperSonics in 1978. During the Bullets' championship season (1978), he averaged 21.8 points and 12.1 rebounds per game in 21 playoff games. Hayes set an NBA Finals record for most offensive rebounds in a game (11), in a May 27, 1979 game against the SuperSonics. The Chicago Bulls' Dennis Rodman would tie this record twice, both games coming in the 1996 NBA Finals, also against the SuperSonics.

Desiring to finish his playing career in Texas and preferably Houston, Hayes was sent back to the Rockets for second-round draft picks in 1981 (Charles Davis) and 1983 (Sidney Lowe) on June 8, 1981.

Shortly after finishing his career in the NBA, Hayes returned to the University of Houston to finish the last 30 credit hours of his undergraduate degree. When interviewed about the experience, Hayes mentioned, "I played 16 years of pro basketball, but this is the hardest thing I've ever done."

In November 2007, Hayes became a City of Liberty Police Reserve Officer, fulfilling a childhood dream. On November 22, 2010, it was announced that he would serve as an analyst for radio broadcasts of Houston Cougars games on Houston's KBME.

In his career with the San Diego/Houston Rockets and the Baltimore/Capital/Washington Bullets, Hayes played 1,303 games over 16 seasons, registering 27,313 points (eleventh all-time) and 16,279 rebounds (fourth all-time). He is the all-time leading scorer for the Washington Bullets/Wizards. Hayes never missed more than two games in any of his 16 seasons in the NBA. In addition to his 1968 scoring title, he led the NBA in rebounding in 1970 and 1974. Hayes played in 12 straight NBA All-Star Games from 1969 to 1980. He retired holding the NBA record for total regular-season minutes played, with exactly 50,000.

Hayes was elected to the Naismith Memorial Basketball Hall of Fame in 1990 and named to the NBA's 50th Anniversary All-Time Team during the 1996–97 NBA season. He boycotted the Hall of Fame beginning in 1990 and refused to return until Guy Lewis, his coach at the University of Houston, was admitted.

In 2003, Hayes was inducted into the Breitbard Hall of Fame, which honors San Diego's finest athletes.

All content from Kiddle encyclopedia articles (including the article images and facts) can be freely used under Attribution-ShareAlike license, unless stated otherwise. Cite this article:
Elvin Hayes Facts for Kids. Kiddle Encyclopedia.