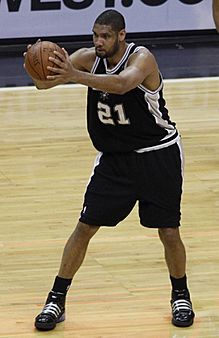 Tim Duncan with the Spurs

Timothy "Tim" Theodore Duncan (born April 25, 1976) is a former professional basketball player from the US Virgin Islands. He played the power forward and center for the San Antonio Spurs of the National Basketball Association (NBA) his entire 19 year career.

Duncan was a swimmer when he was young. In 1989, Hurricane Hugo destroyed the pool he used to practice swimming, and his mother died a year later. Duncan gave up on swimming after this and began playing basketball.

All content from Kiddle encyclopedia articles (including the article images and facts) can be freely used under Attribution-ShareAlike license, unless stated otherwise. Cite this article:
Tim Duncan Facts for Kids. Kiddle Encyclopedia.