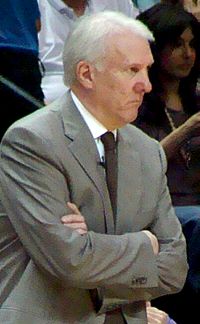 Gregg Charles Popovich (born January 28, 1949 in East Chicago, Indiana) is an American basketball coach. He is the head coach of the National Basketball Association's San Antonio Spurs. Taking over as coach of the Spurs in 1996, Popovich is the longest serving active coach in both the NBA and all Big Four sports leagues. He is often called "Coach Pop" or simply "Pop". Popovich has coached the San Antonio Spurs to five NBA championships and an NBA record 18 consecutive seasons with 50 or more wins (despite a 66-game regular season in 2011-12). He is considered one of the greatest NBA coaches of all time and a strong future candidate for the Naismith Memorial Basketball Hall of Fame.

All content from Kiddle encyclopedia articles (including the article images and facts) can be freely used under Attribution-ShareAlike license, unless stated otherwise. Cite this article:
Gregg Popovich Facts for Kids. Kiddle Encyclopedia.