Merrillville is a town in Ross Township, Lake County, Indiana, United States. The population was 35,246 at the 2010 census. Merrillville is in east-central Lake County, in the Chicago metropolitan area. On January 1, 2015, Merrillville became the most populated town in Indiana, as Fishers in Hamilton County was converted from a town to a city. The town serves as a major shopping hub for Northwest Indiana. 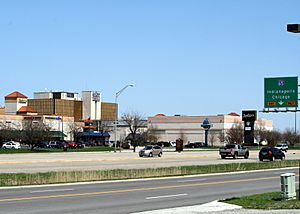 Merrillville as seen from junction of US 30 and I-65

The town is centered on the intersection of U.S. Route 30 and Interstate 65.

Merrillville is located on what used to be woodland that belonged to the Potawatomi Indians. In 1834, a clearing was created for ceremonial purposes and was called McGwinn Village. A year later, a white man by the name of Jeremiah Wiggins settled in the place; McGwinn Village thus gave way to Wiggins Point.

Under the name Wiggins Point, the place became a well-known stop for wagon trains heading to Joliet, Illinois along the old Sauk Trail (also called the Sac Trail), which was an old Indian trail. At one time, 16 trails radiated outward from Wiggins Point. In 1838, Wiggins died. Sometime afterwards, local settlers renamed the place Centerville. Later still, it was renamed Merrillville after the brothers Dudley and William Merrill. Dudley Merrill operated a hotel and store in Centerville, and his son John P. Merrill was a Township Trustee.

In 1848, all of these settlements, including Merrillville (that is, the old McGwinn Village) were collected into one and called Ross Township. As time went by, bits and pieces of Ross Township were taken by Hobart and Crown Point when those towns incorporated.

In 1971, the area officially became Merrillville (which now includes the old Merrillville as well as other settlements nearby) and was incorporated as a town under Indiana law. During this time, the majority of the town's growth was due to white flight from Gary.

In 1993, Merrillville tried to annex unincorporated Winfield Township to get more land. The residents blocked Merrillville by creating the town of Winfield. 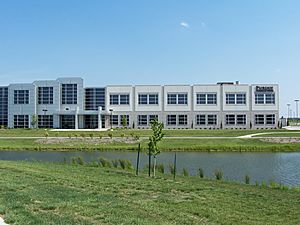 Purdue Technology Center at Ameriplex at the Crossroads in Merrillville

In 2009, a pedestrian bridge at Hidden Lake Park collapsed, injuring at least 25 people.

The catastrophe occurred around 10 PM after the annual Fourth of July fireworks display, when several dozen people attempted to cross the wood suspension bridge. Police officers stationed at either side of the bridge were unable to stop the advancing parkgoers, and with numerous people jumping up and down the 30-year-old bridge collapsed, sending somewhere around 50 people into the waters of Hidden Lake.

The Morgan-Skinner-Boyd Homestead and John Wood Old Mill are listed in the National Register of Historic Places.

Gary Public Transportation Corporation provides bus service along Broadway Avenue corridor and within the US 30 retail/office corridor. Those routes are partially funded by Northwest Indiana Regional Bus Authority. The closest South Shore Line station is located in downtown Gary and can be reached using GPTC Route 17. The closest Amtrak station is located in Dyer, Indiana. It cannot be directly reached by public transit as of this writing.

Merrillville is a hub for retail trade in Northwest Indiana. The US 30 corridor between Taft Street and Colorado Street harbors a large concentration of big-box retailers, hotels, restaurants, and automobile dealerships.

Ameriplex at the Crossroads, an industrial and technology park, opened at Broadway between 93rd Avenue and 101st Avenue in 2005. The development is designated an Indiana Certified Technology Park and includes a business incubator and technology center operated by the Purdue Research Foundation.

Heavy industry such as steelmaking and petroleum refining, which characterizes the economy of northern Lake County, does not have a significant presence in Merrillville. The town is home to the corporate headquarters of Fortune 500 energy company NiSource, hospitality management firm White Lodging, and Centier Bank, Indiana's largest privately owned independent bank.

Public education in the town is provided by the Merrillville Community School Corporation. Andrean High School, a Roman Catholic institution operated by the Diocese of Gary, is also in Merrillville.

All content from Kiddle encyclopedia articles (including the article images and facts) can be freely used under Attribution-ShareAlike license, unless stated otherwise. Cite this article:
Merrillville, Indiana Facts for Kids. Kiddle Encyclopedia.