Hobart is a city in Lake County, Indiana, United States. The population was 29,059 at the 2010 census. Although it has been historically primarily residential, recent annexation has added a significant retail corridor to the city.

There were 11,650 households of which 31.3% had children under the age of 18 living with them, 48.4% were married couples living together, 12.1% had a female householder with no husband present, 5.3% had a male householder with no wife present, and 34.2% were non-families. 28.2% of all households were made up of individuals and 10.8% had someone living alone who was 65 years of age or older. The average household size was 2.48 and the average family size was 3.06.

There were 9,855 households out of which 30.6% had children under the age of 18 living with them, 56.3% were married couples living together, 10.4% had a female householder with no husband present, and 29.2% were non-families. 24.1% of all households were made up of individuals and 10.4% had someone living alone who was 65 years of age or older. The average household size was 2.55 and the average family size was 3.04. 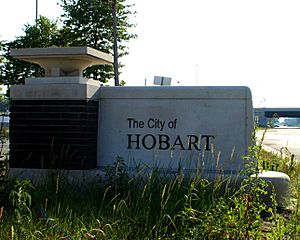 Hobart is home to Lake George, a popular place for people to gather to walk along the city's waterfront. Musical entertainment can be found near the clock tower in Lakefront Park and at the Revelli Bandshell during the warm months. Fishing and boating are two popular activities at Lake George. At Festival Park, people are often seen to feed the plentiful ducks that live there. In the past, fishermen fished at Hobart's Robinson Lake. As of October 2006, Former Mayor Linda Buzenic announced the "highest and best use" for Robinson Lake would be to put it up for sale, according to the Post-Tribune.

Lake George, formed by the damming of Deep River, is a medium-sized lake that winds its way through Hobart. Once a wild and pristine environment rich with native wildlife, non-native species such as the dozens of domesticated ducks and geese and Eurasian mute swans released here by people over the years, as well as artificially high amounts of food due to feedings have produced an environment that holds far more animals than the area could ever naturally sustain. At Festival Park, the one-hundred to two-hundred or so resident birds (which include virtually-flightless domesticated birds, swans, mallards and Canada geese that cannot or do not migrate, and hybrids of all types) that live at the lake year round, as well as migrant Canada geese and mallards, have stripped the shoreline and land of most vegetation, resulting in erosion, and have turned the shallow lake below the dam into little more than a muddy broth of bacteria. The waters, however, are very fertile and as a result one-hundred pound channel catfish have been caught at Festival park. The Oak Savannah rails-to-trails route cuts through the city and offers biking and hiking. The Oak Savannah trail passes by the 90-acre (360,000 m2) Hobart Prairie Grove Unit of the Indiana Dunes National Lakeshore.

The Shirley Heinze Land Trust, Inc. owns other nature preserves in the city of Hobart, including a tallgrass prairie. The Cressmoor Prairie is a dedicated state nature preserve, and is the largest state-protected rare "black soil" or silt-loam prairie in Indiana.

The city's Mundell Field has a quarter-mile outdoor oval track for walking.

Hobart is home to one of Indiana's largest indoor shopping malls: Westfield Southlake, located in the southern part of the city near the intersection of US 30 and Interstate 65. The area is filled with outdoor strip malls that contain over 200 stores and restaurants.

Hobart is home to many thriving businesses in its downtown shopping district, including the historic Art Theatre.

Hobart is also home to the Westfield Southlake Shopping Mall and many surrounding retailers and restaurants, although most businesses are required to list their addresses as Merrillville. Though this area was historically an unincorporated section of Lake County prior to annexation by the City of Hobart, it is currently served by the Merrillville post office.

Hobart is also home to the Indiana Botanic Gardens, which is the nation's largest and oldest retailer of herbs. The company moved to Hobart back in the mid-1990s and is located off Business Route 6.

Another manufacturing concern headquartered in Hobart since 1952 is Midwest Products, a manufacturer of hobby materials and radio controlled model aircraft.

George Earle, an English immigrant bought land from the Potawatomi Native American tribe, who built a dam on Deep River, creating Lake George. He named the settlement that later developed into Hobart, after his brother, Frederick Hobart Earle, who never left England.

All content from Kiddle encyclopedia articles (including the article images and facts) can be freely used under Attribution-ShareAlike license, unless stated otherwise. Cite this article:
Hobart, Indiana Facts for Kids. Kiddle Encyclopedia.