Southlake Mall is a shopping mall in Hobart, Indiana that is marketed as being in Merrillville, Indiana, due primarily to being served by the 46410 postal Zip Code. The tract of land on which it sits was annexed by the city of Hobart from unincorporated Ross Township in 1993. It lies in the Chicago metropolitan area. Southlake Mall is the only enclosed super regional mall in Northwest Indiana, as well as one of largest in the state overall along with Castleton Square in Indianapolis and Glenbrook Square in Fort Wayne. The mall's anchor stores are Kohl's, JCPenney, Macy's, Dick's Sporting Goods, H&M, Books-A-Million, and Forever 21. There are 2 vacant anchors stores that were once Carson Pirie Scott and Sears. The Macy's store was previously an L. S. Ayres prior to September 9, 2006. The mall first opened with only two anchor stores – JCPenney and Sears – and the north and south anchor wings were added later. The former Carson's once housed the cafeteria-style "The Garden Restaurant" next to the entrance near the security garage on the south side of the mall from 1975 to 1989.

Richard E. Jacobs's Jacobs Visconsi Jacobs group built the mall in 1974. The company put it up for sale in 1999, but it was not purchased until 2002 by The Westfield Group, who renamed it Westfield Shoppingtown Southlake, and again to Westfield Southlake.

In July 2011, Borders Group announced it would be closing all of its stores by the end of September due to Chapter 7 Bankruptcy liquidation, including the Southlake Mall location. After Borders was closed, it became Books-A-Million. 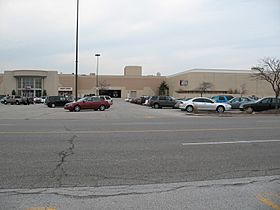 Specialty discount retailer rue21 opened a store in the JCPenney wing in March 2013.

Westfield Group sold the mall and several others to Starwood Capital in September 2013. As part of the sale, the mall's name reverted to Southlake Mall.

Books-A-Million relocated in 2014 and the old location became Forever 21 the same year.

H&M opened at Southlake Mall in the same wing in 2015.

On April 18, 2018, it was announced that Carson's would be closing as parent company The Bon-Ton Stores was going out of business. The store closed on August 29, 2018.

All content from Kiddle encyclopedia articles (including the article images and facts) can be freely used under Attribution-ShareAlike license, unless stated otherwise. Cite this article:
Southlake Mall (Indiana) Facts for Kids. Kiddle Encyclopedia.