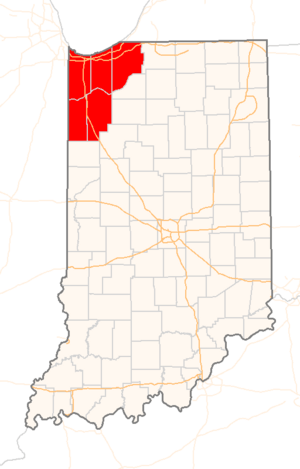 Northwest Indiana, nicknamed "The Region" after the Calumet Region, comprises Lake, Porter, LaPorte, Newton and Jasper counties in Indiana. This region neighbors Lake Michigan and is part of the Chicago metropolitan area. According to the 2010 Census, Northwest Indiana has a population of 819,537 and is the state's second largest urban area after the Indianapolis Metropolitan Area. It is also the home of the Indiana Dunes, parts of which have been preserved through conservation efforts. The town of Ogden Dunes houses the Hour Glass, a museum showcasing the ecological and conservation efforts of O. D. Frank.

The counties of Jasper, Lake, LaPorte, Newton and Porter are included in the Chicago-Naperville-Michigan City Combined Statistical Area, the broadest of the census-derived Metropolitan definitions. Unlike the majority of Indiana, which operates on Eastern Standard Time, these counties are among six in Northern Indiana that are in the Central Time Zone (the other being Starke). This reflects their close economic integration in the Chicago metropolitan area.

The urban areas of Lake County and the contiguous urbanized part of Porter County are sometimes referred to as "The Region," or colloquially, humorously, or even pejoratively, "Da Region." 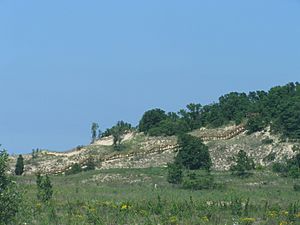 The Lake Michigan shore is a major attraction. Indiana Dunes National Lakeshore, which stretches from Gary to Michigan City, is a well-preserved stretch of sand dunes, beaches, grasslands, and forests, as well as several historical homes and buildings.

The terrain of Northwest Indiana varies from very steep and rugged at the dunes, to rolling in the moraines, and to pancake flat in the river valleys. It was shaped by glacial activity and Lake Michigan. The main geographical features of Northwest Indiana include the Valparaiso Moraine, Tinley Moraine, Lake Border Moraine, Iroquois Moraine, Calumet Shoreline, Glenwood Shoreline, Tolleston shorelines, and the Kankakee Outwash Plain.

The Chicago Lake Plain covers the relatively flat northern quarter of Northwest Indiana north of the moraines. Initially, the plain was flat, composed of glacio-lacustrine deposits. These formed under the waters of glacial Lake Michigan. The lake formed from the melting glaciers north of the Valparaiso Moraine. Eventually the lake overflowed a low spot on the moraine at the Chicago Outlet near the southwest suburbs. This lowered the lake level to current day Lake Michigan levels (Horsley, 1986). As the lake shrunk, it left a series of sand ridges where its ancient beaches were. Along the Lake Michigan shoreline, the prevailing winds have built a series of dune ridges, breaking up the original flat surface of the Lake Plain. 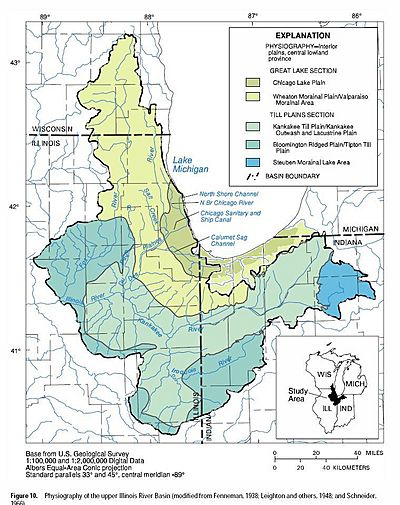 South of the Chicago Lake Plain in the central parts of Lake and Porter County and northern LaPorte county is the hilly Wheaton Morainal Plain. The Wheaton Morainal Plain consist of the Valparaiso Moraine and Tinley Moraine, paralleling the Lake Michigan Shoreline. The plain consist of rolling Wisconsinan-age moraines. The Morainal Plain is clayey till, and sandy and loamy till, with areas of sand and gravel. Other deposits include lake clay, silt, and alluvium. Deposits are between 50 and 200 ft thick, with many southern areas have over 200 ft of till (Mades, 1987).

The Kankakee Outwash Plain (southern Lake, Porter, and LaPorte counties) is a flat outwash plain formed by the melting glacier, which was stopped at the Valparaiso Moraine. (Mickelson and others, 1984). Deposits are predominantly sand and gravel, but also include alluvium and fill materials. Deposits average less than 200 ft thick; in the lowlands they can be less than 50 ft thick, while in the upland they can be more than 200 ft thick. Local elevation changes are less than 100 ft. and include many scattered sand dunes.

The Bloomington Ridged Plain covers only the most southern part of Northwest Indiana in the valley of the Iroquois River in southern Newton and Jasper counties. This area consists of low and rolling hills, i.e., moraines like the Iroquois Moraine with less than 300 ft changes in elevation. The soils are loamy till, lake clay and silt. Unlike the northern half of Northwest Indiana, the Huron-Erie glacial lobe left these deposits in its northeastward retreat. Deposits are less than 200 ft thick, with some more than 400 feet thick. 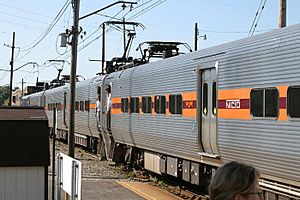 With a gross domestic product of $28.64 billion in 2015, Northwest Indiana accounts for approximately nine percent of Indiana's gross state product. This figure ranks second among metropolitan areas in the state (after Indianapolis) and 89th in the United States, comparable to the GDP of the El Paso, Texas metropolitan area.

The northern portion of Northwest Indiana is noted for its heavy industry. Gary, Portage, Burns Harbor and East Chicago are home to major steel mills, including the largest North American facilities for both U.S. Steel (Gary Works) and Cleveland Cliffs (Indiana Harbor). Whiting and Hammond are home to the largest oil refinery in the Midwestern U.S., operated by BP. Other industrial outputs include fabricated metals, transportation equipment, and food products.

Former Indiana Governor Mitch Daniels and the Indiana State Legislature formed the entity known as the Northwest Indiana Regional Development Authority (RDA) in 2006. The RDA, a special-purpose district, is vested with both legal authority and tax dollars to invest in transportation and economic development throughout the region.

A number of Northwest Indiana's suburban communities serve as bedroom communities for Chicago.

Colleges and universities located in Northwest Indiana include:

These institutions offer a variety of degree programs in fields such as business administration, engineering and engineering technology, law, education, computing and information technology, and the liberal arts. Additionally, Northwest Indiana is proximate to numerous other universities elsewhere in Indiana and in the Chicago metropolitan area.

A number of both public and private primary and secondary schools are also located throughout Northwest Indiana and the nearby Chicago metropolitan area.

All content from Kiddle encyclopedia articles (including the article images and facts) can be freely used under Attribution-ShareAlike license, unless stated otherwise. Cite this article:
Northwest Indiana Facts for Kids. Kiddle Encyclopedia.