Crown Point is a city in and the county seat of Lake County, Indiana, United States. The population was 27,317 at the 2010 census. The city was incorporated in 1868. On October 31, 1834, Solon Robinson and his family became the first settlers to an area that later became Crown Point. Because of its location, Crown Point is known as the "Hub of Lake County".

On October 31, 1834, Solon Robinson and his family became the first settlers to stake a claim in the area that would eventually become Crown Point. In February 1837, Lake County was incorporated, with Liverpool, Indiana, as the county seat. Later that year, Solon Robinson funded a US$500 project to build a new wooden county courthouse in Crown Point, and thus Crown Point became the county seat. However it wasn't until 1868 that Crown Point was actually incorporated into a city. In 1878 construction began on a new, more impressive county court house and clock tower. This new court house, known as the Grand Old Lady, was built in the center of town and would become the dominant feature of Crown Point (further additions to this courthouse would be made from 1907–1928). Campaigning for the presidency of the United States, William Jennings Bryan addressed a crowd from the steps of the court house in 1896. In 1897 a crowd of 4,000 gathered to watch a winning harness racing horse bred by noted Chicago theater manager Will J. Davis and his famous wife, contralto Jessie Bartlett Davis. The Davis' bred trotters and dogs at their Crown Point farm c.1885-1917 (Chicago Daily Tribune, Aug 8, 1897, pg 7). Crown Point was the site of the first Cobe Trophy automobile race, won by Louis Chevrolet in 1909. The Old Lake County Courthouse was placed on the National Register of Historic Places in 1974 and the new Lake County Government Center opened on the north side of the city the next year. Because Crown Point had no waiting period for marriage licenses, the city became a popular place to get married and became known as the "Marriage Mill". Many famous people came to Crown Point to be wed, including Tom Mix, Rudolph Valentino, Cassius Clay, and Jackson 5 patriarch Joseph Jackson. Certain online sources claim that Ronald Reagan and Jane Wyman were married in Crown Point, including the website of current mayor David Uran. However, Reagan and Wyman were in fact married in Glendale, California, according to Fox News, the Washington Post, and the Los Angeles Times.

On March 3, 1934, Crown Point etched its name forever in the history books as the infamous bank robber and FBI "Public Enemy #1" John Dillinger escaped from the "escape-proof" (as it was dubbed by local authorities at the time) Lake County Jail, guarded by many police and national guardsmen. Dillinger apparently escaped using a hand-carved wooden gun blackened with shoe polish, although this was disputed by some witnesses. Dillinger further embarrassed the city, as well as then-42-year-old Sheriff Lillian Holley, by driving off in her brand new V-8 Ford. The press augmented her chagrin with such headlines as: "Slim woman, mother of twins, controlled Dillinger as sheriff." Incensed, Holley declared at the time, "If I ever see John Dillinger again, I'll shoot him dead with my own gun. Don't blame anyone else for this escape. Blame me. I have no political career ahead of me and I don't care." Furthermore, Sheriff Holley made certain the Dillinger name would have no standing in Crown Point up until her death in 1994 at 102.

In March 2008, Universal Studios, under the direction of Michael Mann, visited Crown Point to film parts of the movie Public Enemies at the former county jail facility from which Dillinger escaped. The crime drama is set during The Great Depression with the focus on the FBI agent Melvin Purvis' attempt to stop criminals John Dillinger, Baby Face Nelson, and Pretty Boy Floyd. Christian Bale plays FBI agent Purvis, and Johnny Depp plays Dillinger. Actress Lili Taylor portrayed Sheriff Holley in the film. The shoot took three days to complete and involved a number of scenes inside the former Sheriff's House and jail. There was a scene also constructed for filming of the exterior. Johnny Depp was on the set for all three days and stayed late into the evenings on each night to shake hands with hundreds of fans who stood for hours to see him and the film shoot. The movie was released in June 2009.

There were 10,394 households of which 29.5% had children under the age of 18 living with them, 53.6% were married couples living together, 10.0% had a female householder with no husband present, 3.8% had a male householder with no wife present, and 32.6% were non-families. 27.5% of all households were made up of individuals and 11.7% had someone living alone who was 65 years of age or older. The average household size was 2.45 and the average family size was 3.01.

There were 7,824 households out of which 29.2% had children under the age of 18 living with them, 57.1% were married couples living together, 8.9% had a female householder with no husband present, and 31.5% were non-families. 27.3% of all households were made up of individuals and 11.7% had someone living alone who was 65 years of age or older. The average household size was 2.45 and the average family size was 3.01.

Gary Public Transportation Corporation provides bus service along the 93rd Avenue corridor; however, there are plans to expand bus service within the city along the Broadway corridor from 93rd Avenue to the north terminating at US-231 to the south. These plans are known as the "Livable Broadway Plan" that aims to allow easy travel by public transportation between Gary, Merrillville, and Crown Point and to encourage transit-oriented development at each hub.

The old Lake County Court House is prominently situated in the center of Crown Point, which is commonly referred to simply as the square. The first portion of the court house was erected in 1878, with portions being added on all the way up to 1928. Inside the "Grand Old Lady", there are gift shops, a restaurant, and a museum which is located on the second floor. 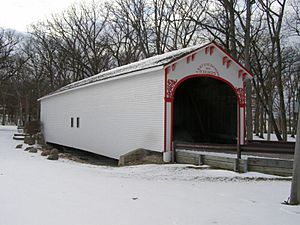 The Lake County Fairgrounds are located near the southern portion of Crown Point. The fairgrounds include historic brick exhibition buildings, tree covered hills, rambling walking paths and a historic grandstand near the retired swimming area at Fancher Lake. The Crown Point Bridge, an 85-foot, single span Burr Arch Truss bridge, is the county's only covered bridge. It was originally built in 1878 near Milroy in Rush County and relocated to the northwest area of the fairgrounds over a gully in 1933.

The Lake County Fair, the 2nd-largest county fair in the state of Indiana, is held on the fairgrounds each year in early August for 10 days. The Lake County Fair always boasts monster trucks, demolition derby, and an entire arena for horse shows.

The Corn Roast and the Taste of Crown Point, annual festivals featuring food and entertainment, are held downtown around the historic courthouse.

All content from Kiddle encyclopedia articles (including the article images and facts) can be freely used under Attribution-ShareAlike license, unless stated otherwise. Cite this article:
Crown Point, Indiana Facts for Kids. Kiddle Encyclopedia.