The second child of Joseph-Félicien Chevrolet, a watchmaker, and Marie-Anne Angéline Mahon, Louis-Joseph Chevrolet was born in La Chaux-de-Fonds, Canton of Neuchâtel, a center of watchmaking in northwestern Switzerland. In 1886, Chevrolet's family left Switzerland to live in Beaune, in the Côte-d'Or département of France. There, as a young man, Louis developed his mechanical skills and interest in bicycle racing. 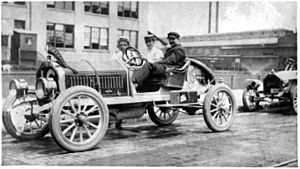 Louis Chevrolet in a Frontenac he designed, circa 1914. 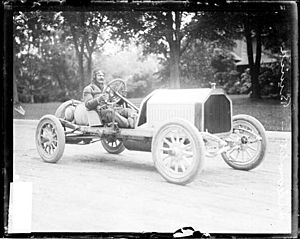 Louis Chevrolet in a Buick racer in Crown Point, Indiana, during the Cobe Cup Race in 1909.

Chevrolet worked for the Roblin mechanics shop in Beaune from 1895 to 1899. He then went to Paris, where he worked for a short time before emigrating to Montreal, Quebec, Canada in 1900 to work as a mechanic. The following year, he moved to New York City, where he worked briefly for a fellow Swiss immigrant's engineering company, then moved to the Brooklyn operations of the French car manufacturer de Dion-Bouton.

In 1905 he married Suzanne Treyvoux; the couple had two sons. In the same year, he was hired by FIAT as a racing car driver. In 1907, Chevrolet was hired by The Autocar Company in Philadelphia, probably for a secret project to develop a revolutionary front-wheel-drive racing car.

His racing career continued as he drove for Buick, becoming a friend and associate of Buick owner William C. Durant, founder of General Motors. He raced at the Giants Despair Hillclimb in 1909.

With little in the way of formal education, Chevrolet learned car design while working for Buick and started designing his own engine for a new car in 1909. He built an overhead valve six-cylinder engine in his own machine shop on Grand River Boulevard in Detroit, Michigan.

On November 3, 1911, Chevrolet co-founded the Chevrolet Motor Car Company with his brother Arthur, Durant, and investment partners William Little (maker of the Little automobile) and Dr. Edwin R. Campbell, son-in-law of Durant and friend of Samuel McLaughlin of the McLaughlin Car Company of Canada Ltd. The company was established in Detroit. One story tells the choosing of the company's logo as a modified Swiss cross, to honor Chevrolet's homeland. Another story tells of the Chevrolet logo as a design taken from the wallpaper of a Paris hotel room where Louis once stayed. 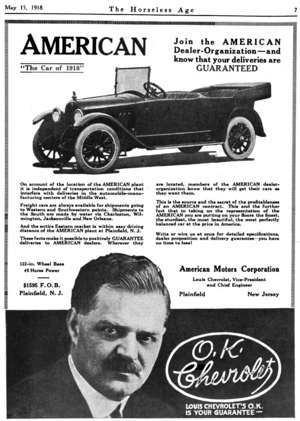 American Motors Corporation advertisement in the journal Horseless Age, May 15, 1918.

In 1916, Louis Chevrolet and his brothers founded the Frontenac Motor Corporation to make racing parts for Ford Model Ts.

Also in 1916, American Motors Corporation (unrelated to the later American Motors created by the 1954 merger of Nash-Kelvinator Corporation and Hudson Motor Car Company) was formed in Newark, New Jersey, with Louis Chevrolet as vice president and chief engineer. By 1918 it was producing cars in a plant at Plainfield, New Jersey. In 1923 it merged with the Bessemer Motor Truck Company of Pennsylvania into Bessemer-American Motors Corporation, which lasted less than a year before merging with the Winther and Northway companies into Amalgamated Motors. The latter company apparently ceased soon after.

By the mid-1910s, Louis Chevrolet had shifted into the racing car industry, partnering with Howard E. Blood of Allegan, Michigan, to create the Cornelian racing car, which he used to place 20th in the 1915 Indianapolis 500 automobile race. In 1916, he and younger brothers Gaston and Arthur Chevrolet started Frontenac Motor Corporation, designing and producing a line of racing cars. They became well known for, among other things, their Fronty-Ford racers.

Louis drove in the Indianapolis 500 four times, with a best finish of 7th in 1919. Both Louis and Gaston competed successfully with racing Sunbeams achieving a number of third places in 1916. Arthur competed twice, and Gaston won the race in 1920 in one of their Frontenacs, going on to win the 1920 AAA National Championship. He also raced for the Buick racing team.

Chevrolet died on June 6, 1941, in Detroit due to a heart attack. He had been plagued with atherosclerosis which had previously led to a leg amputation. He is buried in the Holy Cross and Saint Joseph Cemetery in Indianapolis, Indiana.

The Indianapolis Motor Speedway Museum in Speedway, Indiana, features a memorial at the entrance to the building dedicated to the accomplishments of Louis Chevrolet. The memorial, designed by Fred Wellman and sculpted by Adolph Wolter, was created during 1968–1970 and installed in the spring of 1975. The centerpiece of the memorial is a bronze bust of Chevrolet wearing a racing cap and goggles; it rests on a marble and granite square base.

Chevrolet was inducted into the following halls of fame:

All content from Kiddle encyclopedia articles (including the article images and facts) can be freely used under Attribution-ShareAlike license, unless stated otherwise. Cite this article:
Louis Chevrolet Facts for Kids. Kiddle Encyclopedia.