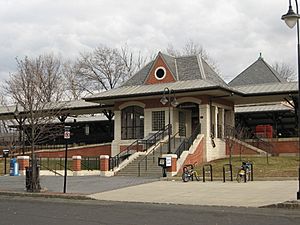 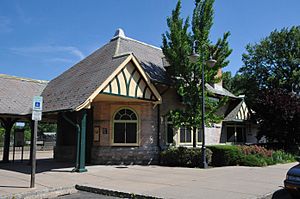 Netherwood station on the Raritan Valley Line to Newark/New York, one of two train stations in Plainfield

Plainfield is a city in Union County, New Jersey, United States, known by its nickname as "The Queen City." The city is both a regional hub for Central New Jersey and a bedroom suburb of the New York Metropolitan area, located within the core of the Raritan Valley region. As of the 2010 United States Census, the city's population increased to 49,808, its highest ever recorded population in any decennial census, with the population having increased by 1,979 (+4.1%) from the 47,829 counted in the 2000 Census, which had in turn increased by 1,262 (+2.7%) from the 46,567 counted in the 1990 Census. The Census Bureau's Population Estimates Program calculated that the city's population was 50,317 in 2019, ranking the city the 776th-most-populous in the country.

Plainfield was incorporated as a city by an act of the New Jersey Legislature on April 21, 1869, from portions of Plainfield Township, based on the results of a referendum held that same day. The city and township coexisted until March 6, 1878, when Plainfield Township was dissolved and parts were absorbed by Plainfield city, with the remainder becoming Fanwood Township (now known as Scotch Plains).

The name "Plainfield", also used in both North Plainfield and South Plainfield, is derived from a local estate or from its scenic location. 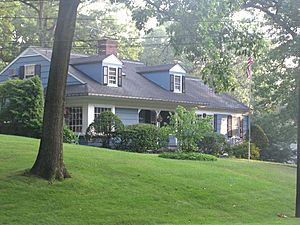 A typical Bungalow-style house in Plainfield

Plainfield was settled in 1684 by Quakers, and incorporated as a city in 1869. Formerly a bedroom suburb in the New York metropolitan area, it has become the urban center of 10 closely allied municipalities, with diversified industries, including printing and the manufacture of chemicals, clothing, electronic equipment, and vehicular parts. Among the several 18th-century buildings remaining are a Friends' meetinghouse (1788), the Martine house (1717), and the Nathaniel Drake House (1746), known as George Washington's headquarters during the Battle of Short Hills in June 1777. Nearby Washington Rock is a prominent point of the Watchung Mountains and is reputed to be the vantage point from which Washington watched British troop movements.

In 1902, the New Jersey Legislature approved measures that would have allowed the borough of North Plainfield to become part of Union County (a measure repealed in 1903) and to allow for a merger of North Plainfield with the City of Plainfield subject to the approval of a referendum by voters in both municipalities.

Plainfield is the birthplace of P-Funk. George Clinton founded The Parliaments while working in a barber shop in Plainfield. Parliament-Funkadelic was inducted in the Rock and Roll Hall of Fame in 1997. Plainfield has been home to former New Jersey governor James McGreevey.

In sports history, Plainfield is the birthplace and/or home of several current and former athletes, including professionals and well-known amateurs. Included in their number are Milt Campbell, the 1956 Olympic Decathlon gold medalist (the first African-American to earn this title), Joe Black, the first African-American pitcher to win a World Series game, Jeff Torborg, former MLB player, coach and manager, and Vic Washington, NFL player.

Archibald Cox, the special prosecutor appointed to oversee prosecutions in the Watergate break-in and related criminal activity during the Nixon administration, was born in Plainfield.

There are numerous sites, including homes, parks, and districts in the city that are listed on the National Register of Historic Places. While not listed, the Plainfield Armory, a prominent landmark completed in 1932, was sold by the state in 2013 as surplus property.

Plainfield's northeast corner, known as the "Sleepy Hollow" section of the city, was and still is characterized by its array of finely landscaped streets and neighborhoods with homes defined by a broad array of architectural styles, most built during the first half of the twentieth century. As one browses the tree-lines neighborhoods, it is obvious that the lot sizes vary, but the stateliness and distinction of each house is evident, whether a stately Queen Anne mansion or gingerbread cottage. Most lots are nicely landscaped and semi or fully private. Sleepy Hollow has remained a desirable place to buy and live despite the decay in other parts of the city.

In its heyday, Plainfield was a regional shopping and entertainment center. Residents of nearby Union, Middlesex and Somerset counties would drive to shop and explore the business districts of Plainfield. Other than during the holidays, peak shopping times in Plainfield were Thursday nights and Saturday, when Front Street and the areas around it bustled.

Plainfield had several entertainment venues. At the peak, there were four operating movie theaters: the Strand, the Liberty, the Paramount and the Oxford theaters. Prior to 1960, Cedarbrook park, at the south end of town, and Greenbrook park, at the north end of town, provided every opportunity for recreation, including ice skating in the winter, fishing, hiking, visits to the ice cream vendor and playgrounds.

Plainfield was affected by the Plainfield riots in July 1967. This civil disturbance occurred in the wake of the larger Newark riots. A Plainfield police officer died, about fifty people were injured, and several hundred thousand dollars of property was damaged by looting and arson. The New Jersey National Guard restored order after three days of unrest. This civil unrest caused a massive white flight, characterized by the percentage of black residents rising from 40% in 1970 to 60% a decade later.

Unincorporated communities, localities and place names located partially or completely within the city include Netherwood.

The Plainfield Symphony performs concerts at Crescent Avenue Presbyterian Church. The orchestra was founded in 1919, making it one of the oldest continuously operating orchestras in the United States.

Plainfield Teacher's College was a mythical institution created as a hoax by a duo of college football fans in 1941. The phony college's equally nonexistent football team had its scores carried by major newspapers including The New York Times before the hoax was discovered. 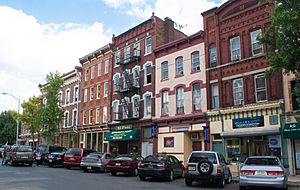 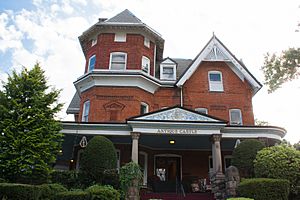 Portions of Plainfield are part of an Urban Enterprise Zone. The city was selected in 1983 as one of the initial group of 10 zones chosen to participate in the program. In addition to other benefits to encourage employment within the Zone, shoppers can take advantage of a reduced 3.3125% sales tax rate (half of the 6+5⁄8% rate charged statewide) at eligible merchants. Established in January 1986, the city's Urban Enterprise Zone status expires in December 2023.

The UEZ program in Plainfield and four other original UEZ cities had been allowed to lapse as of January 1, 2017, after Governor Chris Christie, who called the program an "abject failure", vetoed a compromise bill that would have extended the status for two years. In May 2018, Governor Phil Murphy signed a law that reinstated the program in these five cities and extended the expiration date in other zones.

Events such as the Christmas Tree Lighting, the Queen City 5k, Fire Safety Fair, and Mayor's Wellness Walk take place in the Downtown each year.

The Plainfield Public School District serves students in kindergarten through twelfth grade. The district is one of 31 former Abbott districts statewide that were established pursuant to the decision by the New Jersey Supreme Court in Abbott v. Burke which are now referred to as "SDA Districts" based on the requirement for the state to cover all costs for school building and renovation projects in these districts under the supervision of the New Jersey Schools Development Authority.

The district's main high school was the 318th-ranked public high school in New Jersey out of 339 schools statewide in New Jersey Monthly magazine's September 2014 cover story on the state's "Top Public High Schools", using a new ranking methodology. The school had been ranked 280th in the state of 328 schools in 2012, after being ranked 307th in 2010 out of 322 schools listed. The school was removed in 2009 from the list of persistently dangerous schools in New Jersey.

Established in 1984, Koinonia Academy moved to Plainfield in 1997, where it serves students in PreK through twelfth grades and operates under the auspices of the Roman Catholic Archdiocese of Newark.

Union County College, a community college headquartered in nearby Cranford, maintains a campus in downtown Plainfield. 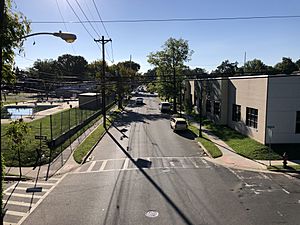 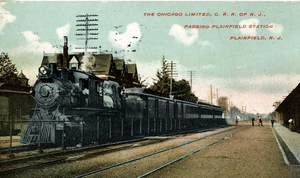 Plainfield has two NJ Transit rail stations on the Raritan Valley Line, formerly the mainline of the Central Railroad of New Jersey. The main Plainfield station is in the downtown and a second, smaller Netherwood station is in the Netherwood section, east of downtown and within a mile of the Fanwood border. A third station, located in the west end of town, was closed long ago. The New Brunswick train station is approximately 15 minutes away. The Central Railroad of New Jersey first offered service to Plainfield in 1839. At the height of popularity, the Plainfield "Jersey Central" train station, with its main station building constructed in 1902, was a hub for commuting to Newark and New York. (The Central Railroad of New Jersey terminal was in Jersey City, where ferries would take the rail passengers to New York City.) The station was located near the main post office and downtown stores. The station was serviced by the now defunct Railway Express postal carrier company.

Newark Liberty International Airport is approximately 30 minutes away. A proposed PATH train extension to Plainfield in the 1970s, with stops at the airport and at Elizabeth, was canceled in 1976.

People who were born in, residents of, or otherwise closely associated with Plainfield include:

All content from Kiddle encyclopedia articles (including the article images and facts) can be freely used under Attribution-ShareAlike license, unless stated otherwise. Cite this article:
Plainfield, New Jersey Facts for Kids. Kiddle Encyclopedia.