The area known as Scotch Plains was first settled by Europeans, including many Scottish Quakers as early as 1684. The name is said to have come from George Scott, a leader of a group of Scottish settlers. It later served as a stop on the stage coach line between New York City and Philadelphia.

The Ash Swamp in Scotch Plains was the scene of a key action in the Battle of Short Hills, on June 26, 1777, which included skirmishes as Washington's forces moved along Rahway Road in Scotch Plains toward the Watchung Mountains. An ancient house in Scotch Plains recalls those skirmishes and, with the acreage adjoining the house, presents a vista of that decade, the 1770s. This was the home of Aunt Betty Frazee, whose retort to Lord Cornwallis led the British to find their bread from friendlier bakers in the same battle. The farmstead of Betty and Gershom Frazee is being restored by local organizations.

Scotch Plains was home to the Shady Rest Country Club, the nation's first African-American country club. Its pro, John Shippen, the first American golf professional, led the 1892 U.S. Open in the final round before finishing fifth. The Shady Rest clubhouse hosted Cab Calloway and other greats as a local center for African-American culture in the 1920s and 1930s. It is preserved today as the Scotch Hills Municipal course.

The ancestors of many residents immigrated from the area of Montazzoli, Italy, as part of a wave of Italian immigrants who arrived in the area in the early 20th century. In recognition of this longstanding connection, the township established "Montazzoli Plaza" in October 2015 in front of the Italian American Club.

The township borders the municipalities of Berkeley Heights, Clark, Fanwood, Mountainside, Plainfield and Westfield in Union County; Edison and South Plainfield in Middlesex County; and Watchung in Somerset County.

Bloomberg Businessweek ranked Scotch Plains as the most affordable suburb in New Jersey in its 2009 report.

There were 8,595 households out of which 37.4% had children under the age of 18 living with them, 62.6% were married couples living together, 9.2% had a female householder with no husband present, and 25.2% were non-families. 21.7% of all households were made up of individuals, and 10.0% had someone living alone who was 65 years of age or older. The average household size was 2.72 and the average family size was 3.20.

Shackamaxon Country Club is a private golf course, swimming and tennis facility also hosting celebrations, founded in 1916 and is located on Shackamaxon Drive in Scotch Plains. Some of its 130+ acres occupy land in Westfield.

Scotch Hills Municipal Golf Course, known as the Shady Rest Golf and Country Club before it was taken over by the township, was at one time the only African-American country club in the United States.

Bowcraft Amusement Park is an amusement park located on Route 22 West that was featured in scenes in the films Mortal Thoughts (1991) and North (1994).

Highland Swimming Club is a private swimming facility with a large L-shaped main pool and a smaller kiddie pool, a BBQ area, a small "Snack Shack", and play area named "The Grove". Its swim team competes against other private swim clubs in the area in meets held mostly in July. It also hosts an annual swim meet with a club from Derry, Northern Ireland.

The two major roads that pass through are Route 28 for a brief stretch in the central part and U.S. Route 22 in the north.

The township is accessible from limited access in neighboring communities, such as Interstate 78 in both Watchung and Berkeley Heights, the Garden State Parkway in Clark and Interstate 287 in Edison Township.

Scotch Plains is bisected by NJ Transit's Raritan Valley Line, formerly the mainline of the Central Railroad of New Jersey. A passenger station is located in Fanwood. Another rail line, the Lehigh Line, carries freight trains through the southernmost tip of the township. 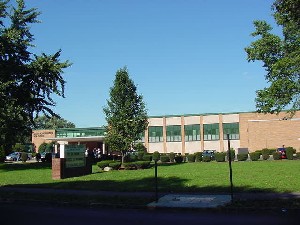 Shackamaxon School, was built in 1951 (the same year as Evergreen School) and operated until 1981, when it was leased to the Jewish Federation of Central New Jersey as their Jewish Community Center and offices. The Federation bought the building outright five years later.

Union Catholic Regional High School (often abbreviated UC), a private Roman Catholic school, brings in students from Union County and parts of Essex and Middlesex counties and operates under the supervision of the Roman Catholic Archdiocese of Newark. The Newark Archdiocese also supervises operation of the K-8 St. Bartholomew Academy.

Union County College has a facility in Scotch Plains.

People who were born in, residents of, or otherwise closely associated with Scotch Plains include:

All content from Kiddle encyclopedia articles (including the article images and facts) can be freely used under Attribution-ShareAlike license, unless stated otherwise. Cite this article:
Scotch Plains, New Jersey Facts for Kids. Kiddle Encyclopedia.