Watchung was incorporated as a borough by an act of the New Jersey Legislature on May 23, 1926, from portions of North Plainfield Township (now Green Brook Township) based on the results of a referendum held on April 20, 1926. The name "Watchung" comes from the Lenni Lenape Native Americans, meaning "high hills" or from "watschu," meaning "hill."

The borough is one of the state's highest-income communities. Based on data from the American Community Survey (ACS) for 2014–2018, Watchung residents had a median household income of $153,341, almost double the statewide median of $79,363.

George Washington surveyed the British troops in Perth Amboy, many miles away, from the first ridge of the Watchung Mountains. The eastern edge of these ridges reaches to the Oranges in the direction of Newark. The name "Washingtonville" was used in early times, but was rejected as the name for the area by the United States Postal Service, which felt that the state already had too many places named Washington.

Watchung, in the 1900s was a semi-rural small community of about 3,200 people in comparison with the relatively larger and more urban communities of Plainfield and Somerville. The first mayor of the town was Henry Baldwin Macdonald, who served from 1926 to 1928. Even as late as the 1960s, it was common for residents to know one another by name, with few moving in or out of the town. The 1967 Plainfield riots, however, caused an exodus of the large upper-middle class population from the nearby cities to the Watchung Hills area to communities such as Watchung, Warren Township and Bridgewater Township.

Watchung was incorporated as a borough by an act of the New Jersey Legislature on May 23, 1926, from portions of North Plainfield Township (now Green Brook Township) based on the results of a referendum held on April 20, 1926.

Fishing is allowed at Watchung Lake on a catch-and-release basis only.

In the wake of public fear that ensued after the 1938 radio broadcast of Orson Welles' The War of the Worlds, National Guard troops were stationed around the hills in Watchung, as told on the vinyl record recording of news reports of the day.

Notable figures who have lived in Watchung include Bobby Thomson, Billy Ard and Carl Banks.

Eaton House is a Watchung historic site that was owned by congressman Charles Aubrey Eaton and has been the residence of other notables over the years. Known also as the Sunbright Farm farmhouse, the home was damaged in April 2014 when it was hit by trees that fell as a result of a likely microburst in a severe storm that rolled through the area.

Unincorporated communities, localities and place names located partially or completely within the borough include Washingtonville.

The Stony Brook flows through Watchung borough, making its way from Warren Township to the Watchung Lake, then through the gorge in the first Watchung mountain and over the Wetumpka Falls, on its way to the Green Brook.

There were 2,114 households out of which 32.3% had children under the age of 18 living with them, 66.2% were married couples living together, 7.2% had a female householder with no husband present, and 23.7% were non-families. 20.1% of all households were made up of individuals, and 12.3% had someone living alone who was 65 years of age or older. The average household size was 2.69 and the average family size was 3.12. 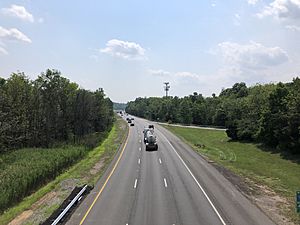 Interstate 78 runs through the northwestern portion of the borough, including interchange 41, entering in the east from Warren Township and continuing for 1.4 miles (2.3 km) to Berkeley Heights Township in Union County. U.S. Route 22 passes briefly through the borough's southeast corner, entering from North Plainfield in the west and continuing into Scotch Plains Township in Union County.

County Route 527 (Mountain Boulevard / Valley Road) stretches 5.2 miles (8.4 km) across the length of the borough from Warren Township in the southwest to Berkeley Heights in the northeast. County Route 531 (Somerset Road / Hillcrest Road) runs for 1.4 miles (2.3 km) across the borough from North Plainfield in the south to the Interstate 78 interchange in Warren Township in the north.

NJ Transit provides service on the 95 bus route between Watchung and Newark.

Students in public school for pre-kindergarten through eighth grade are educated in the Watchung Borough Schools. As of the 2019–20 school year, the district, comprised of two schools, had an enrollment of 604 students and 66.6 classroom teachers (on an FTE basis), for a student–teacher ratio of 9.1:1. Schools in the district (with 2019–20 enrollment data from the National Center for Education Statistics) are Bayberry Elementary School with 326 students in grades PreK – 4 and Valley View School with 271 students in grades 5 – 8.

Watchung's students in public school for ninth through twelfth grades attend Watchung Hills Regional High School in Warren Township together with students from the neighboring communities of Green Brook Township and Warren Township (in Somerset County) and Long Hill Township (in Morris County). As of the 2019–20 school year, the high school had an enrollment of 1,948 students and 160.6 classroom teachers (on an FTE basis), for a student–teacher ratio of 12.1:1. The district's board of education is comprised of nine members, who are elected directly by the voters to serve three-year terms of office on a staggered basis, with three seats up for each year. Of the nine elected seats, two are allocated to Watchung.

Christian denomination Mount St. Mary Academy (9–12), which opened in 1908, is operated by the Sisters of Mercy under the supervision of Roman Catholic Diocese of Metuchen.

People who were born in, residents of, or otherwise closely associated with Watchung include:

All content from Kiddle encyclopedia articles (including the article images and facts) can be freely used under Attribution-ShareAlike license, unless stated otherwise. Cite this article:
Watchung, New Jersey Facts for Kids. Kiddle Encyclopedia.