The town has been one of the state's highest-income communities. Based on data from the American Community Survey for 2013–2017, Westfield residents had a median household income of $159,923, ranked 8th in the state among municipalities with more than 10,000 residents, more than double the statewide median of $76,475.

The old village area, now the downtown district, was settled in 1720 as part of the Elizabethtown Tract. Westfield was originally formed as a township on January 27, 1794, from portions of Elizabeth Township, while the area was still part of Essex County, and was incorporated on February 21, 1798, as one of New Jersey's initial group of 104 townships by an act of the New Jersey Legislature. It became part of the newly formed Union County on March 19, 1857. Portions of the township have been taken to form Rahway Township (February 27, 1804), Plainfield Township (April 5, 1847), Cranford Township (March 14, 1871), Fanwood Township (March 6, 1878; now known as Scotch Plains) and Mountainside (September 25, 1895). The Town of Westfield was incorporated on March 4, 1903, replacing Westfield Township. The name of the town is derived from its location in the western, undeveloped fields of the Elizabethtown tract.

Unincorporated communities, localities and place names located partially or completely within the township include Germantown.

Six municipalities border the town of Westfield: Mountainside to the north, Springfield Township to the northeast, Garwood and Cranford to the east, Clark to the southeast, and Scotch Plains to the west and southwest.

Westfield consists of two sides of the town, the North Side and the South Side. Neighborhoods include Brightwood, Country Club Estates, The Gardens, Indian Forest, Kimball Avenue Historic District, Manor Park, Stonehenge, Stoneleigh Park and Wychwood.

The Westfield Memorial Library was founded in 1873 as the "Every Saturday Book Club" and has evolved over the past century into the Westfield Memorial Library of today. The Library is located in a large, modern, Williamsburg-style building at 550 East Broad Street. The library's collection consists of over 250,000 books, two dozen public computers, a wide array of multimedia options, a large youth services area with a vivid mural depicting Westfield history, and multiple tables and carrels for studying. The library offers classes for adults and children, storytimes for children, and computer instruction. 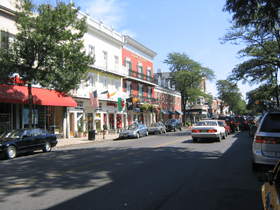 Westfield's downtown features many local and national stores, such as Lord & Taylor and several landmarks that were shown and used in the NBC network television show Ed such as the Rialto Theater. There are over 40 restaurants and casual dining establishments throughout the downtown. Downtown is located mostly north of the Westfield train station. The downtown area has a mix of independent stores and boutiques as well as national stores. Over one-third of the retailers and restaurants have existed for 25 years or more.

Downtown Westfield, with over 200 retail establishments and 400 commercial enterprises, is a regional destination in New Jersey. The Downtown Westfield Corporation (DWC) manages the Special Improvement District (SID) area's growth and enhancement. The DWC participates in the National Main Street program associated with the National Trust for Historic Preservation. It is funded by a SID assessment on downtown properties and operates as the district's management agency. The DWC sponsors marketing efforts and promotions, special event planning, urban design and building improvement projects. The DWC works closely with the town government and volunteer groups to improve the downtown area. In 2004, Westfield won the Great American Main Street Award from the National Trust. In 2010, Westfield was the winner of the America in Bloom contest for communities with a population of 25,001–50,000 against the other two towns entered in their category. Shopping and dining in Westfield attracts citizens from other communities across the state.

Several war memorials (including ones dedicated to the Korean War, World War II, and the Spanish–American War) are located in a plaza near the downtown. The plaza is also home to the September 11 Memorial Park, which pays special tribute to the residents of Westfield who died in the September 11 terrorist attacks.

There were 10,566 households out of which 43.1% had children under the age of 18 living with them, 68.0% were married couples living together, 7.5% had a female householder with no husband present, and 22.4% were non-families. 19.2% of all households were made up of individuals, and 9.8% had someone living alone who was 65 years of age or older. The average household size was 2.85 and the average family size was 3.31. 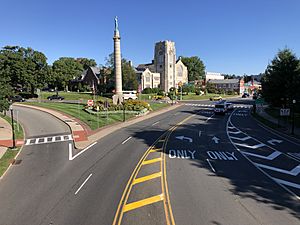 The main road serving Westfield is New Jersey Route 28, which runs for about two miles alongside the commuter railroad that marks the boundary between the town's North and South Sides. Westfield can also be accessed by Exits 135 and 137 of the nearby Garden State Parkway, or by the Lawrence, Mountain, or Springfield Avenue exits of U.S. Route 22. 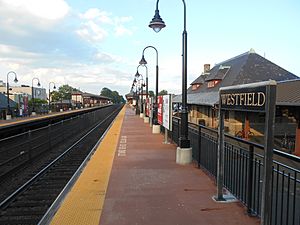 Newark Liberty International Airport is approximately 20 minutes away, most conveniently reached via Route 22 or NJT trains. Linden Airport, a general aviation facility, is in nearby Linden, New Jersey.

Residential telephone service is provided by Verizon Communications. Westfield cable television is supplied by Comcast [1], which also delivers Westfield Community Television (channel 36), News 12 New Jersey (channel 62), and Scotch Plains Local Access Channel (channel 34) Verizon FiOS is also offered in Westfield, which gives the option of digital cable, high-speed internet and telephone service. Power is supplied through the Public Service Electric and Gas Company. Gas is supplied by Elizabethtown Gas and water by American Water of New Jersey. Recycling is collected curbside by private haulers contracted by the Department of Public Works on a biweekly basis, while trash is collected by private haulers hired by residents.

The Greek Orthodox Archdiocese of America Metropolis of New Jersey is headquartered in Westfield.

Holy Trinity Interparochial School is a Middle States-accredited Catholic school run by the three parishes of Holy Trinity and St. Helen's in Westfield along with Our Lady of Lourdes in Mountainside, which offers education from pre-kindergarten to 8th grade and operates under the auspices of the Roman Catholic Archdiocese of Newark.

People who were born in, residents of, or otherwise closely associated with Westfield include:

All content from Kiddle encyclopedia articles (including the article images and facts) can be freely used under Attribution-ShareAlike license, unless stated otherwise. Cite this article:
Westfield, New Jersey Facts for Kids. Kiddle Encyclopedia.