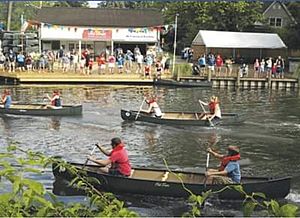 Paddlers race past the Cranford Canoe Club on the Rahway River during the annual Fourth of July competition in Cranford. 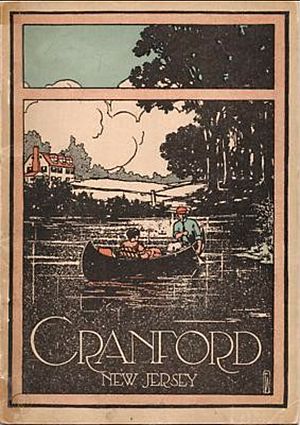 Cranford as depicted on a 1913 Board of Trade brochure.

In both 2018 and 2019, The Star-Ledger named Cranford the best downtown in New Jersey after an online vote, calling it "adorable [and] snowglobe-like." New Jersey Monthly magazine ranked Cranford as its 34th best place to live in its 2010 rankings of the "Best Places To Live."

NJ Transit rail service is available at the Cranford station, along the Raritan Valley train line, with service to Newark Penn Station and to Penn Station in Midtown Manhattan via Midtown Direct. It is part of the New York City metropolitan area.

Cranford was incorporated as a township by an act of the New Jersey Legislature on March 14, 1871, from portions of the Townships of Clark, Linden, Springfield, Union and Westfield. Portions of the township were taken to form Garwood (in 1903) and Kenilworth (in 1907). The township's name is said to derive from the Crane family, including John Crane, who built a mill in 1720 along the Rahway River.

Cranford was incorporated as a township by an act of the New Jersey Legislature on March 14, 1871, from portions of the Townships of Clark, Linden, Springfield, Union and Westfield. Portions of the township were taken to form Garwood (March 19, 1903) and Kenilworth (March 13, 1907). The township's name is said to derive from the Crane family, including John Crane, who built a mill in 1720 along the Rahway River.

Historic sites in the township are overseen by the Cranford Historic Preservation Advisory Board, whose purpose is to identify, record and maintain a system for survey and inventory of all building sites, places and landmarks and structures of historical or architectural significance based on the Secretary of the Interior's Standards and Guidelines for Archeology and Historic Preservation.

The Cranford Historical Society, a private entity founded in 1927 and located in Hanson Park on Springfield Avenue, maintains the Crane-Phillips House (c. 1845), located at 124 North Union Avenue, as a museum.

James E. Warner (1866-1933) is the namesake of the James E. Warner Plaza at the Cranford Train Station. Former sheriff of Union County. Appalled by the growing pollution of the Rahway given the pristine waters of his youth, Sheriff Warner advocated for the preservation of the Rahway River and Rahway River Parkway parkland. One of Sheriff Warner's successful targets in fighting Rahway River pollution was his battle against the discharge of paper makers; one such site is now the famed regional theater known as the Paper Mill Playhouse in Millburn.

Charles Hansel (1859–1936) was co-founder of the Union County Parks Commission that preserved parkland all along the Rahway River and its tributaries in the 1920s (a greenway known as the Rahway River Parkway). He was an engineer for the Pennsylvania Railroad and Central Railroad of New Jersey. Hansel lived in the 300 block of North Union Avenue in a home that still stands today, later moving to what is now Gray's Funeral Home, near what is now called Hansel's Dam by Sperry Park. For his Rahway River preservation efforts, a memorial copper plaque was placed to Hansel in Echo Lake Park.

There are nine municipalities bordering the township: Garwood and Westfield to the west, Springfield Township to the north, Kenilworth to the northeast, Roselle and Roselle Park to the east, Linden to the southeast, Winfield Park and Clark to the south.

Parks run by the township (and overseen by the Cranford Recreation and Parks Department) include:

Parks run by the county inside Cranford's borders (overseen by the Union County, New Jersey Parks and Recreation Department) include:

The Rahway River Parkway is a greenway of parkland that hugs the Rahway River and its tributaries. It was designed in the 1920s by the Olmsted Brothers firm, who were the sons of the eminent landscape architect Frederick Law Olmsted. The Cranford section follows the banks of the meandering Rahway River as it flows south through Lenape Park, Nomahegan Park, Hampton Park, MacConnell Park, Hanson Park, Sperry Park, Crane's Park, Droeschers Mill Park, and Mohawk Park.

The climate in this area is characterized by hot, humid summers and generally mild to cool winters. According to the Köppen Climate Classification system, Cranford has a humid subtropical climate, abbreviated "Cfa" on climate maps.

There were 8,583 households out of which 33.4% had children under the age of 18 living with them, 60.2% were married couples living together, 8.4% had a female householder with no husband present, and 28.3% were non-families. 24.8% of all households were made up of individuals, and 13.3% had someone living alone who was 65 years of age or older. The average household size was 2.61 and the average family size was 3.15.

The Garden State Parkway passes through the township, connecting Clark in the south to Kenilworth in the north. The Parkway is accessible at interchange 136 to County Route 607 for Linden / Roselle / Winfield Park and at interchange 137 for Route 28. Interchange 136 is known as the "four corners", where Clark, Winfield, Cranford and Linden meet.

Cranford's Pace Car Program creates safer roads when drivers pledge to "drive within the posted speed limit", "stop at all stop signs", "stop at all red traffic lights", and "yield to pedestrians in crosswalks". 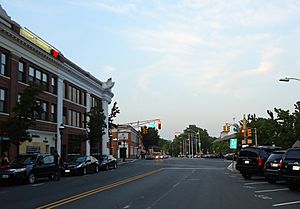 The Cranford station is to the lower right and offers commuter service to Newark and elsewhere.

NJ Transit also provides bus service on the 112 and 113 routes between Cranford and the Port Authority Bus Terminal in New York City and on the 59 and 66 to Newark. The 56, 57 and 58 routes provide local service.

Newark Liberty International Airport is approximately 13 minutes away in Newark / Elizabeth. Linden Airport, a general aviation facility, is in nearby Linden.

The southern section of the township is bisected by Conrail's freight-only Lehigh Line (jointly owned by CSX and Norfolk Southern) along the tracks of the former Lehigh Valley Railroad. The former Staten Island Railway connects with the Raritan Valley Line in Cranford, reaching the island via the Arthur Kill Vertical Lift Bridge. That line has been rehabilitated and since 2007 between Port Newark and Howland Hook and transports containers from the Howland Hook Marine Terminal, an intermodal freight transport service known as ExpressRail. 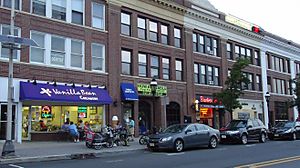 Stores in the downtown area 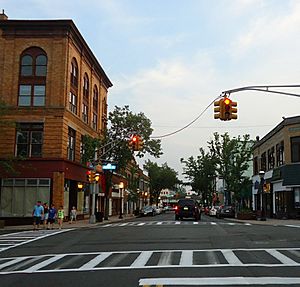 In the 1980s, Cranford founded the state's first special improvement district, which allows for the downtown district to have a special tax on building and business owners for downtown development and marketing which is managed by the Cranford Downtown Management Corporation. The DMC is governed by a Board of Directors consisting of business owners, property owners, and residents, members of which are appointed by the Township Committee.

Tree in Nomahegan Park across from Union County College

Cranford hosts several religious and private schools. Saint Michael's School, located in downtown Cranford, is a Roman Catholic parochial school which serves students in Nursery through Grade 8 and is accredited by the Middle States Commission on Elementary Schools, operating under the auspices of the Roman Catholic Archdiocese of Newark.

The main campus of Union County College – New Jersey's oldest community college, dating back to 1933 – is located in Cranford. The Cranford campus, one of four county locations, was established in 1956.

Rowers on the Rahway River in Cranford circa 1885.

People who were born in, residents of, or otherwise closely associated with Cranford include:

All content from Kiddle encyclopedia articles (including the article images and facts) can be freely used under Attribution-ShareAlike license, unless stated otherwise. Cite this article:
Cranford, New Jersey Facts for Kids. Kiddle Encyclopedia.