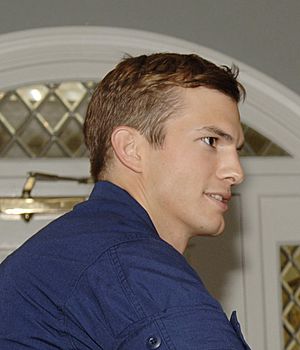 Ashton Christopher Kutcher, is an American actor, producer, and former model. He became well known when he played Michael Kelso on That '70s Show. In 2003, Kutcher produced and starred in his own series, Punk'd, as the host.

In May 2011, Kutcher was announced as Charlie Sheen's replacement on the series Two and a Half Men. Kutcher's contract was for one year and was believed to be worth nearly $20 million.

Kutcher was born in Cedar Rapids, Iowa. He is the son of Diane (née Finnegan), a Procter & Gamble employee, and Larry M. Kutcher, a factory worker. His father is of Bohemian (Czech) ancestry and his mother is of Irish, German, and Bohemian ancestry. Kutcher was raised in a conservative Roman Catholic family, Kutcher has a twin brother, Michael, who had a heart transplant when the brothers were young children. Kutcher's twin brother also has cerebral palsy.

Kutcher is a student of Kabbalah.

In 2006, People magazine ranked him third in its yearly list of "The Sexiest Men Alive".

Kutcher is in advertisements for Nikon cameras. In July 2011, Brazilian fashion label Colcci hired Kutcher and Alessandra Ambrosio to be in a denim advertisement.

All content from Kiddle encyclopedia articles (including the article images and facts) can be freely used under Attribution-ShareAlike license, unless stated otherwise. Cite this article:
Ashton Kutcher Facts for Kids. Kiddle Encyclopedia.