James Douglas Morrison (December 8, 1943 – July 3, 1971) was an American singer-songwriter, and poet, best remembered as the lead vocalist of the Doors. Due to his poetic lyrics, distinctive voice, wild personality, performances, and the dramatic circumstances surrounding his life and early death, Morrison is regarded by music critics and fans as one of the most iconic and influential frontmen in rock music history.

Morrison co-founded the Doors during the summer of 1965 in Venice, California. The band spent two years in obscurity until shooting to prominence with their #1 single in the United States, "Light My Fire", taken from their self-titled debut album. Morrison recorded a total of six studio albums with the Doors, all of which sold well and received critical acclaim. Though the Doors recorded two more albums after his death, the loss of Morrison was crippling to the band and they disbanded in 1973. In 1993, Morrison, as a member of the Doors, was inducted into the Rock and Roll Hall of Fame.

Since his death, his fame has endured as one of popular culture's most rebellious and oft-displayed icons, representing the generation gap and youth counterculture. He was also well known for improvising spoken word poetry passages while the band played live. Morrison was ranked #47 on Rolling Stone's list of the "100 Greatest Singers of All Time", and number 22 on Classic Rock magazine's "50 Greatest Singers in Rock". Ray Manzarek, who co-founded the Doors with him, said Morrison "embodied hippie counterculture rebellion". Morrison was sometimes referred to by other nicknames, such as "The Lizard King" and "Mr. Mojo Risin".

Morrison developed an alcohol dependency during the 1960s, which at times affected his performances on stage. He died at the age of 27 in Paris. As no autopsy was performed, the cause of Morrison's death remains unknown.

James Douglas Morrison was born in Melbourne, Florida, the son of Clara Virginia (née Clarke) and Rear Admiral George Stephen Morrison, USN, who commanded United States naval forces during the Gulf of Tonkin incident, which provided the pretext for the US involvement in the Vietnam War in 1965. Morrison had a younger sister, Anne Robin, who was born in 1947 in Albuquerque, New Mexico; and a younger brother, Andrew Lee Morrison, who was born in 1948 in Los Altos, California. 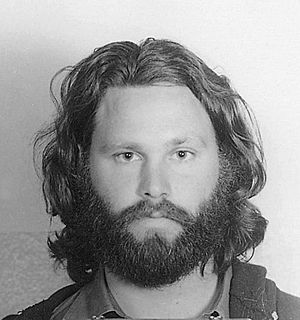 A reader from an early age, Morrison was particularly inspired by the writings of several philosophers and poets. He was influenced by Friedrich Nietzsche. He was also influenced by William S. Burroughs, Jack Kerouac, Allen Ginsberg, Louis Ferdinand Celine, Lawrence Ferlinghetti, Charles Baudelaire, Molière, Franz Kafka, Albert Camus, Honoré de Balzac and Jean Cocteau, along with most of the French existentialist philosophers.

His senior year English teacher said, "Jim read as much and probably more than any student in class, but everything he read was so offbeat I had another teacher (who was going to the Library of Congress) check to see if the books Jim was reporting on actually existed. I suspected he was making them up. I'd never heard of them, but they existed, and I'm convinced from the paper he wrote that he read them, and the Library of Congress would've been the only source." Morrison went to live with his paternal grandparents in Clearwater, Florida, where he attended classes at St. Petersburg College (then known as a junior college). 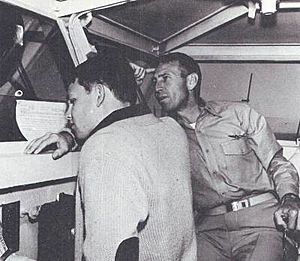 Once Morrison graduated from UCLA, he broke off most contact with his family. By the time Morrison's music ascended to the top of the charts (in 1967) he had not been in communication with his family for more than a year. Admiral Morrison was not supportive of his son's career choice in music.

Morrison spoke fondly of his Irish and Scottish ancestry and was inspired by Celtic mythology in his poetry and songs. Celtic Family Magazine revealed in its 2016 Spring Issue his Morrison clan was originally from the Isle of Lewis, Scotland, while his Irish side, the Clelland clan who married into the Morrison line were from County Down, Ireland.

Charismatic and attractive, Jim Morrison was sought after as a photographer's model, friend and romantic partner by many. Throughout his life he had at least several serious, ongoing relationships. 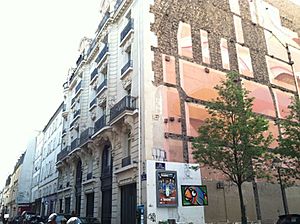 Morrison joined Pamela Courson in Paris in March 1971, at an apartment she had rented for him on the rue Beautreillis (in the 4th arrondissement of Paris on the Right Bank). In letters, he described going for long walks through the city, alone. During this time, he shaved his beard and lost some of the weight he had gained in the previous months.

He died on July 3, 1971, at age 27. He was found by Courson in a bathtub at his apartment. The official cause of death was listed as heart failure. His death was two years to the day after the death of Rolling Stones guitarist Brian Jones, and approximately nine months after the deaths of Jimi Hendrix and Janis Joplin. 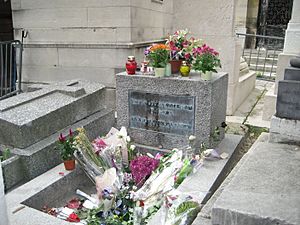 Morrison was buried in Père Lachaise Cemetery in Paris, one of the city's most visited tourist attractions, where Irish playwright Oscar Wilde, French cabaret singer Edith Piaf, and many other poets and artists are also buried. The grave had no official marker until French officials placed a shield over it, which was stolen in 1973.

In 1981, Croatian sculptor Mladen Mikulin voluntarily placed a bust of his own design and a new gravestone with Morrison's name at the grave to commemorate the tenth anniversary of Morrison's death; the bust was defaced through the years by cemetery vandals, and later stolen in 1988. Mikulin made another bust of Morrison in 1989.

All content from Kiddle encyclopedia articles (including the article images and facts) can be freely used under Attribution-ShareAlike license, unless stated otherwise. Cite this article:
Jim Morrison Facts for Kids. Kiddle Encyclopedia.