Janis Lyn Joplin (January 19, 1943 – October 4, 1970) was an American rock singer and songwriter; one of the most successful and widely-known female rock stars of her era. After releasing three albums, she died at the age of 27. A fourth album, Pearl, was released in January 1971, just over three months after her death. It reached number one on the Billboard charts.

In 1967, Joplin rose to fame during an appearance at Monterey Pop Festival, where she was the lead singer of the then little-known San Francisco band Big Brother and the Holding Company. After releasing two albums with the band, she left Big Brother to continue as a solo artist with her own backing groups, first the Kozmic Blues Band and then the Full Tilt Boogie Band.

She appeared at the Woodstock festival and the Festival Express train tour. Five singles by Joplin went into the Billboard Hot 100, including a cover of the song "Me and Bobby McGee", which reached number 1 in March 1971. Her most popular songs include her cover versions of "Piece of My Heart", "Cry Baby", "Down on Me", "Ball and Chain", and "Summertime"; and her original song "Mercedes Benz", her final recording.

Joplin, highly respected for her charismatic performing ability, was inducted into the Rock and Roll Hall of Fame in 1995 after her death. Audiences and critics alike referred to her stage presence as "electric". Rolling Stone ranked Joplin number 46 on its 2004 list of the 100 Greatest Artists of All Time and number 28 on its 2008 list of 100 Greatest Singers of All Time.

She remains one of the top-selling musicians in the United States, with Recording Industry Association of America certifications of 15.5 million albums sold. 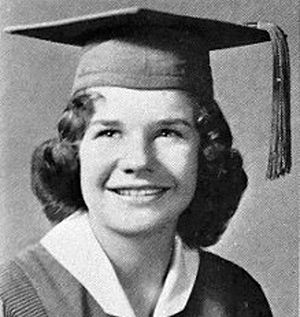 Janis Lyn Joplin was born in Port Arthur, Texas, to Dorothy Bonita East (1913–1998), a registrar at a business college, and her husband, Seth Ward Joplin (1910–1987), an engineer at Texaco. She had two younger siblings, Michael and Laura. The family belonged to the Churches of Christ denomination.

Joplin stated that she was bullied in high school. As a teen, she became overweight and suffered with acne. Other kids at high school would routinely taunt her and call her names. She stated, "I was a misfit. I read, I painted, I thought."

Joplin graduated from high school in 1960 and attended Lamar State College of Technology in Beaumont, Texas during the summer and later the University of Texas at Austin (UT), though she did not complete her college studies. While at UT she performed with a folk trio called the Waller Creek Boys. 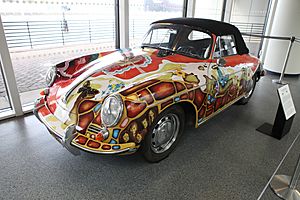 Joplin died on October 4, 1970 in Los Angeles, California at the age of 27. She was cremated in the Westwood Village Memorial Park Cemetery in Westwood, California, and her ashes scattered into the Pacific Ocean in a burial at sea. The album Pearl was released six weeks after her death. The movie The Rose, with Bette Midler playing the Joplin character, was based on her life.

She is now remembered best for her powerful, distinctive voice, significantly divergent from the soft folk-influenced styles most common at the time, as well as her lyrical themes of pain and loss.

All content from Kiddle encyclopedia articles (including the article images and facts) can be freely used under Attribution-ShareAlike license, unless stated otherwise. Cite this article:
Janis Joplin Facts for Kids. Kiddle Encyclopedia.