Jean-Louis Lebris de Kerouac (born March 12, 1922 – died October 21, 1969), better known as Jack Kerouac, was an American author and poet. He was part of the Beat Generation movement of writers and artists of the 1950s and 1960s, and gave the movement its name. His most famous work was a long novel titled On the Road, which was published in 1957. The version of On the Road that finally satisfied Kerouac was written over three weeks in 1951. It was typed on a single roll of teletype paper. Kerouac liked to type on rolls of paper, because he did not have to stop to change pages.

Kerouac was a friend of writers Allen Ginsberg, William S. Burroughs, Lawrence Ferlinghetti, and Gregory Corso, among many others. Nearly all of Kerouac's writings were directly based on his own life, but he mostly changed names and details, to protect everyone's privacy. The man he wrote about most was his friend Neal Cassady, who was called "Dean Moriarty" in On the Road. Kerouac influenced many other writers and poets who came along later, and also many musicians of the 1960s, through his works. He also changed the way Americans saw themselves, and their country.

Kerouac was born in Lowell, Massachusetts to French-Canadian parents (named Leo and Gabrielle), and was the youngest of three children. He spoke only French until he started school. His family was Roman Catholic. His father was a printer, and Kerouac became interested in printed works. He liked to make his own handwritten newspapers and books. He enjoyed reading, and imitated the styles of writers he liked. He became an expert typist, and could type faster than 100 words per minute. 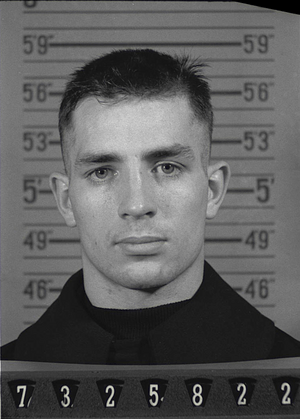 Kerouac was a good athlete, and earned a football scholarship to Columbia University. An injury during a practice game ended his football career. He dropped out of Columbia, and devoted himself to writing stories and plays. He met Allen Ginsberg at college. Their circle of friends included many future writers and artists, like William S. Burroughs, and Herbert Huncke.

During World War II, Kerouac served in the Merchant Marine, which made him a veteran of the American military. He kept journals of his experiences, and he used them later to write other works. He was honorably discharged from military service in 1943. Kerouac was proud to be an American, and always said good things about his country.

Jack Kerouac's a piece of the roll On The Road

Viking Press agreed to publish On the Road, after many changes to the manuscript. The novel became a bestseller, and Kerouac was a celebrity after years of little success. Magazines began to request articles and essays from him. He appeared on many television programs, including The Steve Allen Show. Steve Allen liked him, and they recorded an album together, with Kerouac reading aloud and Allen playing piano. He recorded another album later, with jazz musicians Al Cohn and Zoot Sims.

As Kerouac and friends became famous, a trend among the group of writers and artists was noticed, and was written about in the mainstream media. Kerouac was asked to describe his generation. He explained that the pressures of 20th century living had 'beaten' normal ways of thinking and working out of them, and they preferred the beat of bebop and jazz to most other music, "so I guess you could say we're a beat generation."

"Beat Generation" became the name for the new sense of style coming from artists and writers in New York and San Francisco. Kerouac's circle of friends and acquaintances (and their imitators) were called the Beats, with Kerouac himself called "King of the Beats" by the media.

An ongoing problem Kerouac had with fame was that people thought he did all the things he wrote about. Shy by nature, Kerouac pulled away. He became almost a recluse in the house he bought for his mother.

During the 1960s, American society went through many changes, in part because of the influence of the Beats. Writers liked the looseness of Kerouac's style, and it made them think more about their own writing, how to study life, and how to better express themselves. Many musicians were affected by Kerouac's books, including Bob Dylan, Donovan, and The Doors. 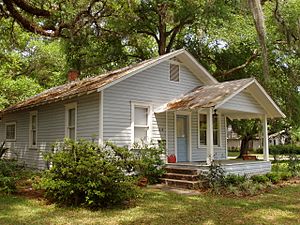 Kerouac was more disappointed than happy to be famous. Even though he liked some of what he inspired, he felt that the public largely got the wrong message from his books.

Kerouac wrote and reworked new material until the last day of his life. He died in St. Petersburg, Florida during emergency surgery, to try to repair a hemorrhage. He was buried in his hometown, and was hardly remembered there at first. Even though he was world famous, Kerouac earned very little money as a writer. He died with only a few hundred dollars in the bank. It was years before his grave received a headstone. 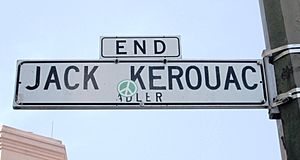 Less than half of Kerouac's writings were published during his lifetime, but nearly all are now available. The ones published later drew hundreds of times more money than his most famous works. His hometown Lowell remembers Kerouac today with a memorial, and cultural events every year. His grave now has a headstone, which reads "He honored life". A street in Lowell was renamed "Jack Kerouac Alley" in his memory.

All content from Kiddle encyclopedia articles (including the article images and facts) can be freely used under Attribution-ShareAlike license, unless stated otherwise. Cite this article:
Jack Kerouac Facts for Kids. Kiddle Encyclopedia.