Lawrence Monsanto Ferlinghetti (March 24, 1919 – February 22, 2021) was an American poet, painter, liberal activist, and the co-founder of City Lights Bookstore. He was the author of poetry, translations, fiction, theatre, art criticism, and movie narration. Many of his works were inspired and about the city of San Francisco. 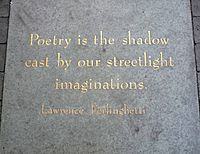 Ferlinghetti’s poetry is based on lyric and narrative traditions. His themes are the beauty of nature, the tragicomic life of the common man, the situation of the individual in mass society, and the dream and betrayal of democracy.

Ferlinghetti began painting in Paris in 1948. In San Francisco he occupied a studio that he inherited from Hassel Smith. His first works show the influence the New York abstract expressionists. A more figurative style is apparent in his later works. Ferlinghetti’s paintings have been shown at various museums around the world.

60 years of painting, the exhibition held in Italy in 2010, is a creative journey through the twentieth century, reflecting on the role of the artist nowadays. 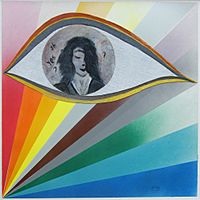 Ferlinghetti died of lung disease on February 22, 2021 at his home in San Francisco at age 101.

From 2009 he was on the Honour Committee of IMMAGINE&POESIA, the artistic literary movement founded in Turin, Italy, with the patronage of Aeronwy Thomas (Dylan Thomas's daughter).

All content from Kiddle encyclopedia articles (including the article images and facts) can be freely used under Attribution-ShareAlike license, unless stated otherwise. Cite this article:
Lawrence Ferlinghetti Facts for Kids. Kiddle Encyclopedia.