North Beach is a neighborhood in the northeast of San Francisco adjacent to Chinatown, the Financial District, and Russian Hill. The neighborhood is San Francisco's "Little Italy" and has historically been home to a large Italian American population, largely from Northern Italy. It still has many Italian restaurants, though many other ethnic groups currently live in the neighborhood. It was also the historic center of the beatnik subculture and has become one of San Francisco's main nightlife districts as well as a residential neighborhood populated by a mix of young urban professionals, families, and Chinese immigrants.

The American Planning Association (APA) has named North Beach as one of ten "Great Neighborhoods in America".

North Beach is bounded by the former Barbary Coast, now Jackson Square, the Financial District south of Broadway, Chinatown to the southwest of Columbus below Green Street, Russian Hill to the west, Telegraph Hill to the east and Fisherman's Wharf at Bay Street to the north.

The somewhat compact layout of the neighborhood consists of apartments, duplexes, and Victorian homes dating from the 1920s, when residents rebuilt the neighborhood from its complete destruction after the earthquake and fire of 1906. 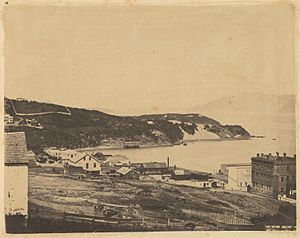 Originally, the city's northeast shoreline extended only to what is today Taylor and Francisco streets. The area largely known today as North Beach was an actual beach, filled in with landfill around the late 19th century. Warehouses, fishing wharves, and docks were then built on the newly formed shoreline. Due to the proximity of the docks, the southern half of the neighborhood south of Broadway was home of the infamous Barbary Coast.

Following its reconstruction after the 1906 earthquake, a large number of Italian immigrants created the Italian character of the neighborhood that still exists. Prominent Italian Americans that came from the neighborhood include baseball legend Joe DiMaggio who grew up in the neighborhood and briefly returned to live there with his wife Marilyn Monroe during the 1950s, as well as former San Francisco mayor and politician Joseph Alioto plus others from the prominent Alioto family.

During the 1950s, many of the neighborhood's cafes and bars became the home and epicenter of the Beat Generation and gave rise to the San Francisco Renaissance. The term "beatnik" originated from the scene here and was coined in a derogatory fashion by famed San Francisco Chronicle columnist Herb Caen. Many of that generation's most famous writers and personalities such as Jack Kerouac, Allen Ginsberg, Gregory Corso, Neal Cassady lived in the neighborhood. Another poet from this generation, Lawrence Ferlinghetti, founded the City Lights Bookstore that still exists today on the corner of Broadway and Columbus as an official historic landmark and serves as one of the main focal points of this generation.

During the 1960s a notable night spot was The Committee, an improvisational theatre group founded by alumni of The Second City in Chicago. The Committee opened April 10, 1963 at 622 Broadway in a 300-seat cabaret theater.

In the 1970s and 1980s Broadway was the location of many live music clubs, like the Stone, and a punk rock club called the Mabuhay Gardens.

Since the 1980s, and much like Manhattan's Little Italy, due to a decrease in emigration from Italy and gentrification, the neighborhood has seen its native Italian American population rapidly shrink, while neighboring Chinatown has been rapidly expanding north into the neighborhood south of Broadway and along Stockton Street causing a major demographic shift to a mix of mostly Chinese and young professional population, although some, albeit very few, Italian Americans remain.

Paul Kantner was living in North Beach in an apartment unit above Al's Attire at the corner of Grant Avenue and Vallejo Street at the time of his death, and was often a patron of nearby Cafe Trieste. 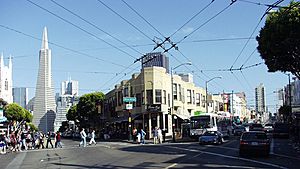 Looking southeast from Columbus Avenue (on the left) and Stockton (on the right). The Transamerica Pyramid is visible in the background on Columbus Avenue. The array of overhead wires supply power for the electric trolley buses such as the one seen on Stockton Street. 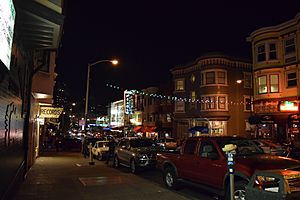 The neighborhood still retains an Italian character with many Italian restaurants, cafes, and bakeries that line Columbus Avenue and Washington Square.

It is in the San Francisco Unified School District (SFUSD) and is within the John Yehall Chin Elementary School (余河小學) attendance area. Chin has a Cantonese language program.

The Academy of Art University has at least one building in the area, across the street from Pier 39.

The San Francisco Art Institute is located in the northern end of North Beach, on Russian Hill.

All content from Kiddle encyclopedia articles (including the article images and facts) can be freely used under Attribution-ShareAlike license, unless stated otherwise. Cite this article:
North Beach, San Francisco Facts for Kids. Kiddle Encyclopedia.