Telegraph Hill (elev. 285 ft (87 m)) is a hill and surrounding neighborhood in San Francisco, California. It is one of San Francisco's 44 hills, and one of its original "Seven Hills". 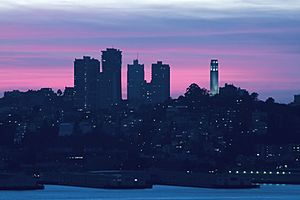 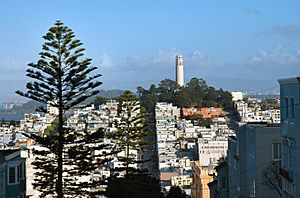 Coit Tower on Telegraph Hill, as seen from Russian Hill

Originally named Loma Alta ("High Hill") by the Spaniards, the hill was then familiarly known as Goat Hill by the early San Franciscans, and became the neighborhood of choice for many Irish immigrants. From 1825 through 1847, the area between Sansome and Battery, Broadway and Vallejo streets was used as a burial ground for foreign non-Catholic seamen.

The hill owes its name to a semaphore, a windmill-like structure erected in September 1849, for the purpose of signaling to the rest of the city the nature of the ships entering the Golden Gate. Atop the newly built house, the marine telegraph consisted of a pole with two raisable arms that could form various configurations, each corresponding to a specific meaning: steamer, sailing boat, etc. The information was used by observers operating for financiers, merchants, wholesalers and speculators. Knowing the nature of the cargo carried by the ship they could predict the upcoming (generally lower) local prices for those goods and commodities carried. Those who did not have advance information on the cargo might pay a too-high price from a merchant unloading his stock of a commodity — a price that was about to drop. On October 18, 1850, the ship Oregon signaled to the hill as it was entering the Golden Gate the news of California's recently acquired statehood.

The pole-and-arm signals on the Telegraph Hill semaphore became so well known to townspeople that, according to one story, during a play in a San Francisco theater, an actor held his arms aloft and cried, "Oh God, what does this mean?," prompting a rogue in the gallery to shout, "Sidewheel steamer!," which brought down the house.

Sailing ships brought cargo to San Francisco, but needed ballast when leaving. Rocks for ballast were quarried from the bay side of Telegraph Hill. Exposed rock from this quarrying is still visible from the Filbert Steps and from Broadway, where there was a large landslide on February 27, 2007 that damaged property and forced the evacuation of many residents.

A second semaphore system was built at Point Lobos in 1853, which communicated with Telegraph Hill. However, with the advent of the electrical telegraph in 1862, both became obsolete. Telegraph Hill retained its name and is now registered as California Historical Landmark #91, marking the location of the original signal station.

In the 1920s, Telegraph Hill became with North Beach a destination for poets and bohemian intellectuals, dreaming of turning it into a West Coast West Village. 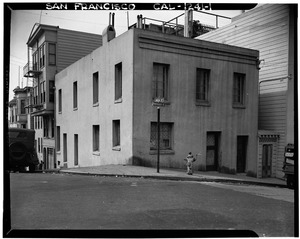 Telegraph Hill is primarily a residential area, much quieter than adjoining North Beach with its bustling cafés and nightlife. Aside from Coit Tower, it is well known for its gardens flowing down Filbert Street down to Levi Plaza. 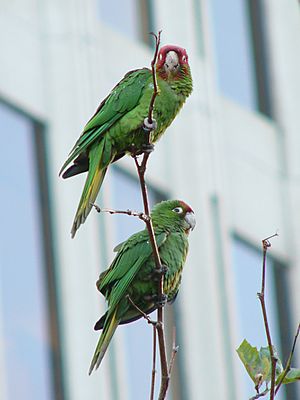 Today Telegraph Hill is known for supporting a flock of feral parrots, primarily red-masked parakeets (Aratinga erythrogenys), descended from escaped or released pets. The flock was popularized by a book and subsequent documentary (2003), both titled The Wild Parrots of Telegraph Hill.

The birds, known in the bird trade as cherry-headed conures, are native to Peru and Ecuador; they have established a breeding colony, with the support of some residents, as reported in the film The Wild Parrots of Telegraph Hill, and through the help of volunteers with Mickaboo Companion Bird Rescue. They range widely, including along The Embarcadero and in the Presidio.

A controversial San Francisco city ordinance passed on June 5, 2007, prohibits the feeding of parrots in public spaces. The feeding ban was championed by Mark Bittner, the birds' most outspoken supporter who fed them for years and wrote the book The Wild Parrots of Telegraph Hill. Other local conservationists also supported the ban, though some residents continue to object.

All content from Kiddle encyclopedia articles (including the article images and facts) can be freely used under Attribution-ShareAlike license, unless stated otherwise. Cite this article:
Telegraph Hill, San Francisco Facts for Kids. Kiddle Encyclopedia.