During the last Ice Age, when sea level was several hundred feet lower, the waters of the glacier-fed Sacramento River and the San Joaquin River scoured a deep channel through the bedrock on their way to the ocean. (A similar process created the undersea Hudson Canyon off the coast of New York and New Jersey.) The strait is well known today for its depth and powerful tidal currents from the Pacific Ocean. Many small whirlpools and eddies can form in its waters. With its strong currents, rocky reefs and fog, the Golden Gate is the site of over 100 shipwrecks. 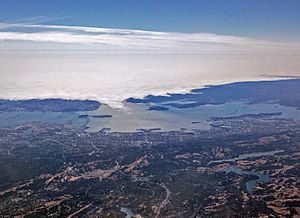 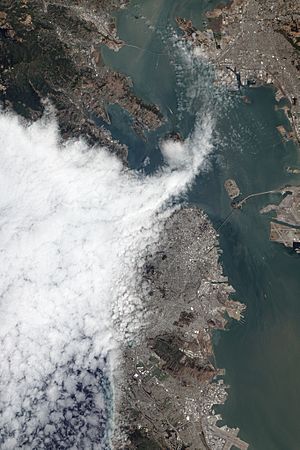 The Golden Gate is often shrouded in fog, especially during the summer. Heat generated in the California Central Valley causes air there to rise, creating a low pressure area that pulls in cool, moist air from over the Pacific Ocean. The Golden Gate forms the largest break in the hills of the California Coast Range, allowing a persistent, dense stream of fog to enter the bay there. Although there is no weather station on Golden Gate proper, the area has a mediterranean climate (Köppen Csb) with very narrow temperature fluctuations, cool summers and mild winters. For the nearest weather station see the weatherbox of San Francisco. The Golden Gate Bridge being nearer the ocean and at elevation indicate it being cooler during summer days. Nearer the San Francisco urban core, the temperatures resemble the official NOAA weather station instead. 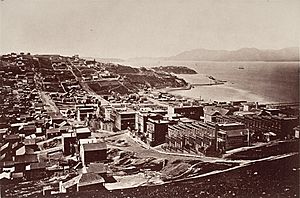 Before the Europeans arrived in the 18th century, the area around the strait and the bay was inhabited by the Ohlone to the south and Coast Miwok people to the north. Descendants of both tribes remain in the area.

The strait was surprisingly elusive for early European explorers, presumably due to persistent summer fog. The strait is not recorded in the voyages of Juan Rodríguez Cabrillo nor Francis Drake, both of whom may have explored the nearby coast in the 16th century in search of the fabled Northwest Passage. The strait is also unrecorded in observations by Spanish galleons returning from the Philippines that laid up in nearby Drakes Bay to the north. These galleons rarely passed east of the Farallon Islands (27 miles (43 km) west of the Golden Gate), for fear of the possibility of rocks between the islands and the mainland.

The first recorded observation of the strait occurred nearly two hundred years later than the earliest European explorations of the coast. In 1769, Sgt José Francisco Ortega, the leader of a scouting party sent north along the San Francisco Peninsula by Don Gaspar de Portolá from their expedition encampment in San Pedro Valley to locate the Point Reyes headlands, reported back to Portolá that he could not reach the location because of his encounter with the strait. On August 5, 1775 Juan de Ayala and the crew of his ship San Carlos became the first Europeans known to have passed through the strait, anchoring in a cove behind Angel Island, the cove now named in Ayala's honor. Until the 1840s, the strait was called the "Boca del Puerto de San Francisco" ("Mouth of the Port of San Francisco"). On July 1, 1846, before the discovery of gold in California, the entrance acquired a new name. In his memoirs, John C. Frémont wrote, "To this Gate I gave the name of 'Chrysopylae', or 'Golden Gate'; for the same reasons that the harbor of Byzantium was called Chrysoceras, or Golden Horn." He went on to comment that the strait was “a golden gate to trade with the Orient.”

In the 1920s, no bridge spanned the watery expanse between San Francisco and Marin in California—so when the U.S. Post Office issued a postage stamp on May 1, 1923, celebrating The Golden Gate, the issue naturally portrayed the scene without a bridge. The schooner sailing ship in the engraving is the USS Babcock, which served in the United States Navy from 1917 to 1919, and is seen passing through the Golden Gate into San Francisco Bay, its port of call. 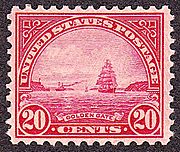 The Golden Gate, featured on a postage stamp issued in 1923

The Golden Gate in California, as seen from the Marin Headlands looking south.

The Golden Gate Bridge was the longest suspension bridge span in the world when completed in 1937, and is an internationally recognized symbol of San Francisco and California in general. Since its completion, the span length has been surpassed by eight other bridges. It still has the second longest suspension bridge main span in the United States, after the Verrazano-Narrows Bridge in New York City. In 2007, it was ranked fifth on the List of America's Favorite Architecture by the American Institute of Architects.

For navigational guidance, there are white and green lights on the center of the span of the Golden Gate Bridge. Lighthouses with beacons and foghorns provide alerts at Point Bonita, Point Diablo, Lime Point and Mile Rocks. Before the Golden Gate Bridge was built, a lighthouse protected the south side of the strait at Fort Point. Buoys and radar reflectors provide additional navigational aid at various locations throughout the strait.

All content from Kiddle encyclopedia articles (including the article images and facts) can be freely used under Attribution-ShareAlike license, unless stated otherwise. Cite this article:
Golden Gate Facts for Kids. Kiddle Encyclopedia.