Angel Island is an island in San Francisco Bay. The entire island is included within Angel Island State Park, administered by California State Parks. The island, a California Historical Landmark, has been used by humans for a variety of purposes, including seasonal hunting and gathering by indigenous peoples, water and timber supply for European ships, ranching by Mexicans, United States military installations, a United States Public Health Service Quarantine Station, and a U.S. Bureau of Immigration inspection and detention facility. The Angel Island Immigration Station, on the northeast corner of the island, which has been designated a National Historic Landmark, was where officials detained, inspected, and examined approximately one million immigrants, who primarily came from Asia. Under the Chinese Exclusion Act of 1882, the first United States law to restrict a group of immigrants based on their race, nationality, and class, all arriving Chinese immigrants were to be examined by immigration or customs agents. 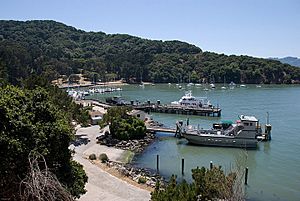 Angel Island is the second largest island in area of the San Francisco Bay (Alameda is the largest). The island is so large that on a clear day, Sonoma and Napa can be seen from the north side of the island; San Jose can be seen from the south side of the island. The highest point on the island, almost exactly at its center, is Mount Caroline Livermore at a height of 788 feet (240 m). The island is almost entirely in the city of Tiburon, in Marin County, although, there is a small sliver (0.7%) at the eastern end of it (Fort McDowell) which extends into the territory of the City and County of San Francisco. The island is separated from the mainland of Marin County by Raccoon Strait, the depth of the water approximately 90 feet. The United States Census Bureau reported a land area of 3.107 km² (1.2 sq mi) and a population of 57 people as of the 2000 census. 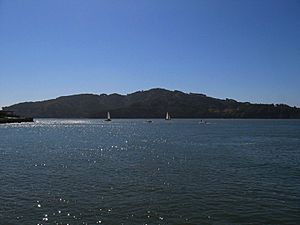 Angel Island as seen from Tiburon. 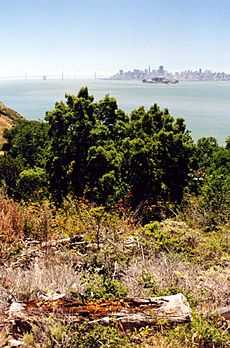 Until about ten thousand years ago, Angel Island was connected to the mainland; it was cut off by the rise in sea levels due to the end of the last ice age. From about two thousand years ago the island was a fishing and hunting site for Coast Miwok Native Americans. Similar evidence of Native American settlement is found on the nearby mainland of the Tiburon Peninsula upon Ring Mountain. In 1775, the Spanish naval vessel San Carlos made the first European entry to the San Francisco Bay under the command of Juan de Ayala. Ayala anchored off Angel Island, and gave it its modern name (Isla de los Ángeles); the bay where he anchored is now known as Ayala Cove.

In his book Two Years Before the Mast, published in 1840, Richard Henry Dana, Jr. mentions in chapter 26, that in 1834 his sailing ship collected wood from "a small island, about two leagues from the Yerba Buena anchorage, called by us 'Wood Island' and by the Mexicans 'Isla de los Ángeles' and was covered with trees to the waters edge."

Like much of the California coast, Angel Island was subsequently used for cattle ranching. In 1863, during the American Civil War, the U.S. Army was concerned about Confederate naval raiders attacking San Francisco. It decided to construct artillery batteries on Angel Island, first at Stuart (or Stewart) Point and then Point Knox. Col. René Edward De Russy was the Chief Engineer; James Terry Gardiner was the engineer tasked with designing and supervising the work. The Army established a camp on the island (now known as Camp Reynolds or the West Garrison), and it subsequently became an infantry garrison during the US campaigns against Native American peoples in the West. 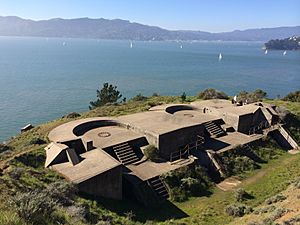 In the later 19th century, the army designated the entire island as "Fort McDowell" and developed further facilities there, including what is now called the East Garrison or Fort McDowell. A quarantine station was opened in Ayala Cove (which at the time was known as Hospital Cove) in 1891. During the Spanish–American War the island served as a discharge depot for returning troops. It continued to serve as a transit station throughout the first half of the 20th century, with troops engaged in World War I embarking and returning there. At the end of World War I the disembarkation center was commanded by William P. Burnham, who had commanded the 82nd Division in France during the war.

In 1938, hearings concerning charges of membership in a proscribed political party against labor leader Harry Bridges were held on Angel Island before Dean James Landis of Harvard Law School. After eleven weeks of testimony that filled nearly 8,500 pages, Landis found in favor of Bridges. The decision was accepted by the United States Department of Labor and Bridges was freed.

During World War II the need for troops in the Pacific far exceeded prior needs. The facilities on Angel Island were expanded and further processing was done at Fort Mason in San Francisco. Prior to the war the infrastructure had been expanded, including building the Army ferry USAT General Frank M. Coxe, which transported troops to and from Angel Island on a regular schedule. Fort McDowell was used as a detention station for Japanese, German and Italian immigrant residents of Hawaii arrested as potential fifth columnists (despite a lack of supporting evidence or access to due process). These internees were later transferred to inland Department of Justice and Army camps. Japanese and German prisoners of war were also held on the island, supplanting immigration needs, which were curtailed during the war years.

The army decommissioned the military post in 1947. In 1954 a Nike missile station was installed on the island. The missile magazines were constructed above Point Blunt on the island's southeast corner, and the top of Mount Ida (now Mount Caroline Livermore) was flattened and the associated radar and tracking station (IFC) was installed there. The missiles were removed in 1962, when the military finally left the island. The missile launch pad still exists, but the station atop Mount Caroline Livermore was completely removed and the mountaintop was later restored to its original contours. 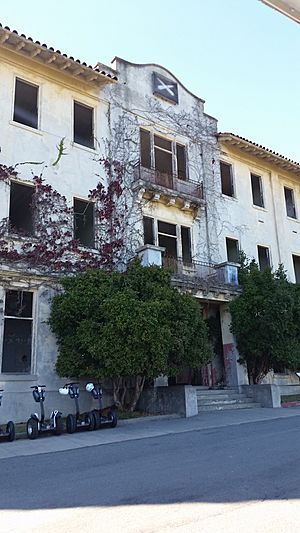 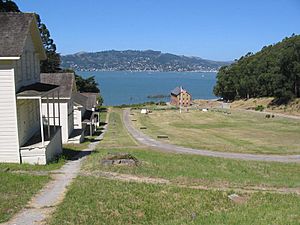 From 1910 to 1940, the Angel Island Immigration Station processed approximately 1 million Asian immigrants entering into the US, leading to it sometimes being referred to as "The Ellis Island of the West". Due to the restrictions of the Chinese Exclusion Act of 1882, many Chinese immigrants spent years on the island, waiting for entry. While waiting for entry into the United States, many of those at Angel Island began carving poetry in the walls of their barracks. Officers of the station puttied over the walls as many as seven times between 1910 and 1940 to cover over the poetry. In time, the putty flaked off and the poetry was visible again. A fire destroyed the administration building in 1940, and subsequent immigration processing took place in San Francisco.

On 18 Jan. 1940, 512 surviving crewmen of the SS Columbus arrived here, awaiting their return to Germany. In Oct., 8 officers were able to flee on the Asama Maru.

In 1964, the Chinese American community successfully lobbied the State of California to designate the immigration station as a State Landmark. Today, the Angel Island Immigration Station is a federally designated National Historic Landmark. It was renovated by the California State Parks, which re-opened February 16, 2009. Docent tours for school groups can be made by appointment. 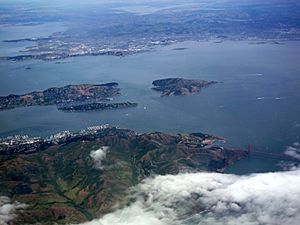 In 1955, the State Park Commission authorized California State Parks to purchase 38 acres (15 ha) around Ayala Cove, marking the birth of Angel Island State Park. Additional acreage was purchased four years later, in 1959. The last federal Department of Defense personnel withdrew in 1962, turning over the entire island as a state park in December of the same year.

There is one active United States Coast Guard lighthouse on the island at Point Blunt. The lighthouse at Point Stuart has been disestablished.

The island's native plant communities include coastal grassland and coastal scrub, mostly on the island's south- and west-facing slopes and ridge tops, and evergreen woodland – predominantly of Coast Live Oak (Quercus agrifolia), bay (Umbellularia californica), toyon (Heteromeles arbutifolia), and madrone (Arbutus menziesii), with California Hazelnut (Corylus cornuta) and Western Sword Fern (Polystichum munitum) in the understory – on the eastern and northern portions of the island sheltered from the westerly winds from the Golden Gate.

It is thought that the Coast Miwoks used regular fires to expand the grassland and shrublands at the expense of the woodlands. The grasslands and shrublands provided edible seeds and bulbs, and supported larger numbers of deer and small game.

The military had planted 24 acres of Bluegum Eucalyptus (Eucalyptus globulus) on the island for windbreaks, beautification, timber, and erosion control. By the mid-1980s, the area covered by eucalyptus had expanded to 86 acres. In the 1980s, California State Parks undertook environmental studies to remove most of the Eucalyptus from the island, in order to restore native flora and reduce fire danger. The proposal generated controversy and received much local media coverage, and was approved to begin in 1990. Eucalyptus were removed from 80 acres between 1990 and 1997, and nursery-grown native plants were planted in the cleared areas. Six acres of historically significant eucalyptus trees were retained.

Mule Deer (Odocoileus hemionus) were reintroduced to the island by the army in 1915 for hunting. In the absence of predators, the deer population expanded and overgrazed the island. The deer population is now managed annually by California State Parks and the Department of Fish and Game.

In 2002, the summit of Mount Caroline Livermore, which had been flattened in the 1950s to build the Nike missile radar and tracking installation, was re-contoured to resemble its original appearance, and increased 16 feet in height as a result. The access road up the west side of the mountain was removed, and replaced with a winding trail up the east side. 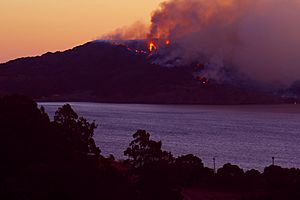 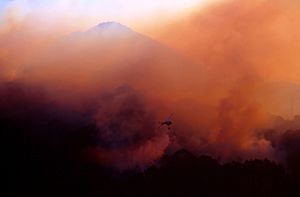 A helicopter, faintly visible amid smoke near center of image, drops water on the wildfire in the morning on October 13, 2008. 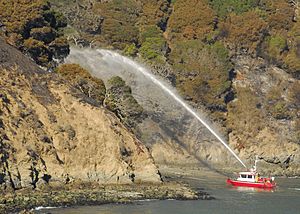 Fireboat Tiburon deploys her watercannon on an otherwise inaccessible shoreline fire, on October 12, 2008.

Firefighters were ferried from the mainland and helicopters dropped water and fire retardants to protect the historical buildings and extinguish the fire that was fully contained by October 14, 2008 at approximately 7 p.m. 380 of the island's 740 acres (300 ha) were burned in the fire. With the exception of one abandoned water tank, no structures were lost in the fire.

The United States Coast Guard asserted that firefighting efforts were coordinated from the USCGC Sockeye.

Access to the island is by private boat or public ferry from San Francisco, Tiburon or Vallejo. During the off-season (October–March), all ferries run a reduced schedule. All fares include park admission. The California State Park Annual Day Use Pass can be used to pay day use dock fees for private boats, but it is not accepted from visitors coming via the public ferries.

Bicycles can be brought on the ferry or rented seasonally on land and used on the island's main roads. Electric scooters and Segways can also be rented. Due to the terrain, roller skates, roller blades, skateboards, kick scooters, and personal Segway scooters are prohibited.

Dogs (except service dogs) are not allowed.

Wood fires are prohibited. Charcoal fires are allowed, but charcoal is not available for purchase on the island.

There are 11 environmental campsites, including an ADA site, 9 numbered sites (each site accommodating up to 8 people), and a kayak-accessible group site (holds up to 20 people).

Night travel on the island is prohibited in some areas for reasons of park security and public safety.

Metal detectors, while allowed, are not recommended, because digging or disturbing the soil or ground in the park is prohibited.

Angel Island is served by PG&E via two 12 kV undersea cables which cross Raccoon Strait from Tiburon. As of mid-2015, peak electrical load is approximately 100 kW. One cable is out of service and the other is deteriorating. Instead of replacing the cables, PG&E is investigating using the island for a distributed energy resources microgrid pilot project.

All content from Kiddle encyclopedia articles (including the article images and facts) can be freely used under Attribution-ShareAlike license, unless stated otherwise. Cite this article:
Angel Island (California) Facts for Kids. Kiddle Encyclopedia.