The San Joaquin River is one of the two major rivers of California, in the United States. At 330 miles (530 km) long, it is the second longest river in California, after the Sacramento River. It begins on the west Sierra Nevada Mountains and flows west and north to its end at San Francisco Bay, at the Sacramento-San Joaquin Delta. Its basin, which is about 32,000 square miles (82,879 square kilometers) in size, contains mostly farmland. The river provides drinking water to over 22 million California citizens. Its three largest tributaries are the Merced, Tuolumne, and Stanislaus rivers.

The river was once one of the richest river ecosystems in California. However, now over 60 miles (97 km) of the river is dry except during floods, because lots of water has been taken away for irrigation. In fact, below Friant Dam, a dam built in the 1940s on the San Joaquin River, 95 percent of the river's flow is dry. Much of the river is polluted, destroying the historic population of chinook salmon, once the southernmost in the United States. Pesticides, selenium, and many more toxic materials are carried by the San Joaquin into San Francisco Bay.

Source in the Sierra Nevada

The Middle Fork of the San Joaquin River, just below Thousand Island Lake.

In the Central Valley

The river continues west into the Central Valley of California, and is joined by many other rivers flowing off the Sierra Nevada mountains. The most largest of these are the Stanislaus River, Tuolumne River, and Merced River. The Tuolumne and Merced river both flow out of Yosemite National Park.

As the river flows north and west, it is joined by the following tributaries:

The San Joaquin River and its tributaries pass through/feed the following lakes and reservoirs:

Several man-made channels are also part of the river system:

Before humans began to develop the Central Valley in the 1850s, the San Joaquin River and its surrounding lands were one of the richest biological habitats in California. In winter, the river would flood the valley, leaving behind wetlands. These wetlands became rich habitat for birds and other animals. The habitat of the endangered San Joaquin Kit Fox and the riparian brush rabbit also was near the San Joaquin River. 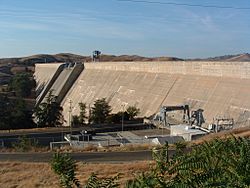 In 1942, a big dam, Friant Dam, was built on the San Joaquin River. This dam took away a lot of water from the river, to irrigate crops, provide drinking water, and provide electricity. The dam destroyed the salmon habitat in the river, and also destroyed the creation of these wetlands.

The Friant Dam is:

The San Joaquin River has been used a lot for shipping of products via boats and ships, otherwise known as navigation. The river was first used for navigation during the California Gold Rush of 1849. Boats carried people over 200 miles (320 km) up the river to look for gold in the mountains. Now, there is a channel that runs all the way upriver to the city of Stockton. This channel allows big ships to sail in the river up to this point. Sediment, however, has clogged a lot of the river channel above this point, preventing big ships from going any farther.

All content from Kiddle encyclopedia articles (including the article images and facts) can be freely used under Attribution-ShareAlike license, unless stated otherwise. Cite this article:
San Joaquin River Facts for Kids. Kiddle Encyclopedia.