The Central Valley (also called the Great Central Valley) is a very large valley in the middle of California, in the United States. About 42,000 square miles (108,779 square kilometers) in size, it is about the size of the state of Tennessee. It consists of two connected, differently named valleys, the Sacramento Valley and the San Joaquin Valley.

The Central Valley has 18 California counties. 15 of these counties are among the 25 most productive farmland in California. Overall, the Central Valley economy depends on farming. However, this has led to serious environmental damages, such as pesticides and selenium and other bad materials being washed into the rivers and polluting the San Francisco Bay. 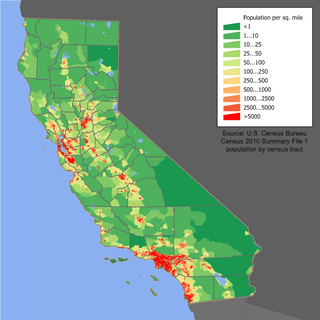 -from north to south.

Mount Whitney is the tallest mountain in the Sierra Nevada and the rest of California and the United States (except for Alaska and Hawaii.)

The Sierra Nevada mountains are on the east side of the valley. These mountains are very tall and steep. Lots of rivers and streams flow off the Sierra Nevada. The highest mountain in the Sierra Nevada is Mount Whitney (14,495') which is also the tallest mountain in California and the rest of the United States (except for Alaska and Hawaii). On the west side, there is the California Coast Ranges, an extension of the Pacific Coast Ranges. Its highest point is approximately 8,848'. 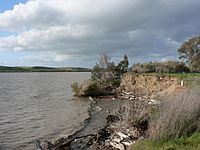 The San Joaquin River begins at the south Sierra Nevada, and flows west and north into the Central Valley and to San Francisco Bay. Altogether, its length is sone 330 miles (530 km). The San Joaquin is more polluted than the Sacramento, and about 63 miles (101 km) of it is actually dry.

Together, the Sacramento-San Joaquin river system is the water supply of 22-23 million people in California.

Areas with Mediterranean climate around the world.

The climate of the Sacramento Valley (north Central Valley) and San Joaquin Valley are very different. The Sacramento Valley has a Mediterranean climate. This means that it has warm, dry summers and cool, wet winters. The San Joaquin Valley is much hotter and drier. Most of it is Mediterranean steppe, which is similar to Mediterranean except that it is warmer and drier. Some of it, however, can be close to desert climate. This section of the Central Valley is said to have the worst air quality in California.

The Central Valley is home to about 6.5 million people. The ten largest cities in or near the valley are, by population:

This picture of the Central Valley shows the many farms in it.

The Burlington Northern Santa Fe Railway (BNSF) and the Union Pacific Railroad (UP) go through the Central Valley as well. Some of their branch lines include:

Amtrak is one of the main rail service providers in the Central Valley, and is also popular in much of the rest of California.

All content from Kiddle encyclopedia articles (including the article images and facts) can be freely used under Attribution-ShareAlike license, unless stated otherwise. Cite this article:
Central Valley Facts for Kids. Kiddle Encyclopedia.