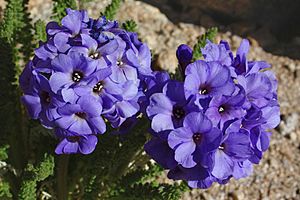 The summit of Mount Whitney is on the Sierra Crest and the Great Basin Divide. It lies near many of the highest peaks of the Sierra Nevada. The peak rises dramatically above the Owens Valley, sitting 10,778 feet (3,285 m) or just over two miles above the town of Lone Pine 15 miles to the east, in the Owens Valley. It rises more gradually on the west side, lying only about 3,000 feet (910 m) above the John Muir Trail at Guitar Lake.

The mountain is partially dome-shaped, with its famously jagged ridges extending to the sides. Mount Whitney is above the tree line and has an alpine climate and ecology. Very few plants grow near the summit: one example is the sky pilot, a cushion plant that grows low to the ground. The only animals are transient, such as the butterfly Parnassius phoebus and the gray-crowned rosy finch.

From the east, water from Mount Whitney flows to Lone Pine Creek, where most of the water is diverted into the Los Angeles Aqueduct via a sluice. Some water in the creek is allowed to continue on its natural course, joining the Owens River, which in turn terminates at Owens Lake, an endorheic lake of the Great Basin.

The estimated elevation of the summit of Mount Whitney has changed over the years. The technology of elevation measurement has become more refined and, more importantly, the vertical coordinate system has changed. The peak was commonly said to be at 14,494 ft (4,418 m) and this is the elevation stamped on the USGS brass benchmark disk on the summit. An older plaque on the summit (sheet metal with black lettering on white enamel) reads "elevation 14,496.811 feet" but this was estimated using the older vertical datum (NGVD29) from 1929. Since then the shape of the Earth (the geoid) has been estimated more accurately. Using a new vertical datum established in 1988 (NAVD88) the benchmark is now estimated to be at 14,505 ft (4,421 m). 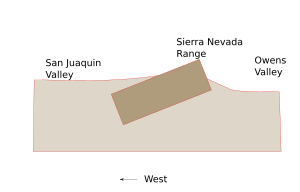 The eastern slope of Whitney is far steeper than its western slope because the entire Sierra Nevada is the result of a fault block that is analogous to a cellar door: the door is hinged on the west and is slowly rising on the east.

The rise is caused by a fault system that runs along the eastern base of the Sierra, below Mount Whitney. Thus, the granite that forms Mount Whitney is the same as the granite that forms the Alabama Hills, thousands of feet lower down. The raising of Whitney (and the downdrop of the Owens Valley) is due to the same geological forces that cause the Basin and Range Province: the crust of much of the intermontane west is slowly being stretched.

The granite that forms Mount Whitney is part of the Sierra Nevada Batholith. In Cretaceous time, masses of molten rock that originated from subduction rose underneath what is now Whitney and solidified underground to form large expanses of granite. In the last 2 to 10 million years, the Sierra was pushed up which enabled glacial and river erosion to strip the upper layers of rock to reveal the resistant granite that makes up Mount Whitney today.

Mount Whitney has an alpine tundra climate (ET) under the Köppen climate classification. Summer temperatures are highly variable, ranging from below freezing to highs near 80 °F (27 °C) during extreme heat waves in the Owens Valley.

There is no weather station at the summit, but this climate table contains interpolated data for an area below the summit. 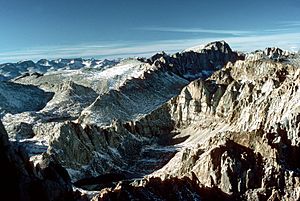 In July 1864, the members of the California Geological Survey named the peak after Josiah Whitney, the State Geologist of California and benefactor of the survey. During the same expedition, geologist Clarence King attempted to climb Whitney from its west side, but stopped just short. In 1871, King returned to climb what he believed to be Whitney, but having taken a different approach, he actually summited nearby Mount Langley. Upon learning of his mistake in 1873, King finally completed his own first ascent of Whitney, but did so a month too late to claim the first recorded ascent. Just a month earlier, on August 18, 1873, Charles Begole, A. H. Johnson, and John Lucas, all of nearby Lone Pine, had become the first to reach the highest summit in the contiguous United States. As they climbed the mountain during a fishing trip to nearby Kern Canyon, they called the mountain Fisherman's Peak.

In 1881 Samuel Pierpont Langley, founder of the Smithsonian Astrophysical Observatory remained for some time on the summit, making daily observations on the solar heat. Accompanying Langley in 1881 was another party consisting of Judge William B. Wallace of Visalia, W. A. Wright and Reverend Frederick Wales. Wallace later wrote in his memoirs that "The Pi Ute [Paiute] Indians called Mt. Whitney "Too-man-i-goo-yah," which means "the very old man." They believe that the Great Spirit who presides over the destiny of their people once had his home in that mountain." The spelling Too-man-i-goo-yah is a transliteration from the indigenous Paiute Mono language. Other variations are Too-man-go-yah and Tumanguya. 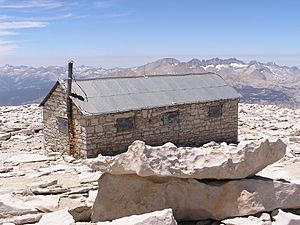 In 1891, the United States Geological Survey's Board on Geographic Names decided to recognize the earlier name Mount Whitney. Despite losing out on their preferred name, residents of Lone Pine financed the first trail to the summit, engineered by Gustave Marsh, and completed on July 22, 1904. Just four days later, the new trail enabled the first recorded death on Whitney. Having hiked the trail, U.S. Bureau of Fisheries employee Byrd Surby was struck and killed by lightning while eating lunch on the exposed summit. In response to this event, Marsh began work on the stone hut that would become the Smithsonian Institution Shelter, and completed it in 1909.

A movement began after World War II to rename the mountain for Winston Churchill. However, the name Mount Whitney has persisted. 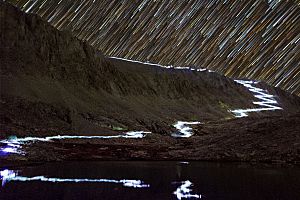 The most popular route to the summit is by way of the Mount Whitney Trail which starts at Whitney Portal, at an elevation of 8,360 ft (2,550 m), 13 mi (21 km) west of the town of Lone Pine. The hike is about 22 mi (35 km) round trip with an elevation gain of over 6,100 ft (1,900 m). Permits are required year round, and to prevent overuse a limited number of permits are issued by the Forest Service between May 1 and November 1. The Forest Service holds an annual lottery for hiking and backpacking permits on the Mount Whitney Trail. Applications are accepted from February 1 through March 15. Any permits left over after the lottery is completed typically go on sale April 1. Most hikers plan to stay one or two nights camping along the route. Those in good physical condition sometimes attempt to reach the summit and return to Whitney Portal in one day. A single day hike requires a "day use" permit that prohibits the use of overnight camping gear (sleeping bag and tent). Day hikers often leave Whitney Portal before sunrise and hike from 12 to 18 hours round trip.

Longer approaches to Whitney arrive at its west side, connecting to the Mount Whitney Trail near the summit by way of the John Muir Trail. 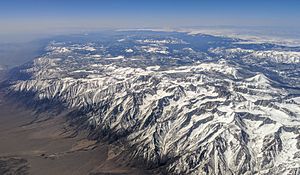 Aerial view of Mount Whitney and the steep eastern side of the Sierra Nevada, from the north

The "Mountaineer's Route", a gully on the north side of the east face first climbed by John Muir, is considered a scramble, class 3 (PD+). The fastest recorded time up this route to the summit and back to the portal is 3 hours 10 minutes, by Jason Lakey of Bishop.

The steep eastern side of the mountain offers a variety of climbing challenges. The East Face route, first climbed in 1931, is one of the Fifty Classic Climbs of North America routes and involves technical free climbing (class 5.7) but is mostly class 4. Other routes range up to grade 5.10d.

South of the main summit there are a series of minor summits that are completely inconspicuous from the west but appear as a series of "needles" from the east. The routes on these include some of the finest big-wall climbing in the high Sierra. Two of the needles were named after participants in an 1880 scientific expedition to the mountain. Keeler Needle was named for James Keeler and Day Needle was named for William Cathcart Day. The latter has now been renamed Crooks Peak after Hulda Crooks who hiked up Mount Whitney every year until well into her nineties.

All content from Kiddle encyclopedia articles (including the article images and facts) can be freely used under Attribution-ShareAlike license, unless stated otherwise. Cite this article:
Mount Whitney Facts for Kids. Kiddle Encyclopedia.