The Alabama Hills are a range of hills and rock formations near the eastern slope of the Sierra Nevada in the Owens Valley, west of Lone Pine in Inyo County, California.

Though geographically separate from the Sierra Nevada, they are part of the same geological formation.

The Alabama Hills location as a gateway to Mt. Whitney and the Eastern Sierra Nevada Mountains has made dispersed camping very popular with the overlanding and RV communities. The region's fragile ecosystem and increasing numbers of visitors to Alabama Hills has prompted the Bureau of Land Management in its most recent guide to the area to discourage this practice asking visitors to, "Camp in campgrounds. Using campgrounds reduces the number of vehicles, so that the great views are not blocked. Use the restroom in town or at nearby campgrounds. If that isn’t an option, bury human waste in catholes 6 inches deep and 200 feet away from water, trails and camp. There are no restrooms in the hills...Camping in campgrounds helps maintain the area’s great scenery and recreational opportunities. City of Los Angeles Department of Water and Power lands in the area are open for day use only." Current fire and other restrictions can be found at the BLM's Alabama Hills NSA page. 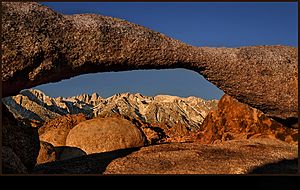 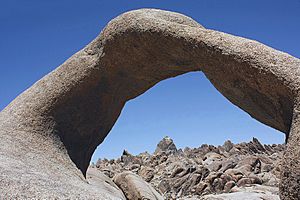 Mount Whitney, the tallest mountain in the contiguous United States, towers several thousand feet above this low range, which itself is 1,500 feet (460 m) above the floor of Owens Valley. However, gravity surveys indicate that the Owens Valley is filled with about 10,000 feet (3,000 m) of sediment and that the Alabamas are the tip of a very steep escarpment. This feature may have been created by many earthquakes similar to the 1872 Lone Pine earthquake which, in a single event, caused a vertical displacement of 15–20 feet. 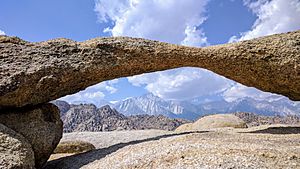 There are two main types of rock exposed at Alabama Hills. One is an orange, drab weathered metamorphosed volcanic rock that is 150–200 million years old. The other type of rock exposed here is 82- to 85-million-year-old biotite monzogranite which weathers to potato-shaped large boulders, many of which stand on end due to spheroidal weathering acting on many nearly vertical joints in the rock.

Dozens of natural arches are among the main attractions at the Alabama Hills. They can be accessed by short hikes from the Whitney Portal Road, the Movie Flat Road and the Horseshoe Meadows Road. Among the notable features of the area are: Mobius Arch, Lathe Arch, the Eye of Alabama and Whitney Portal Arch. 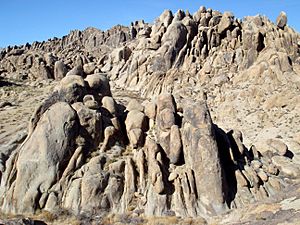 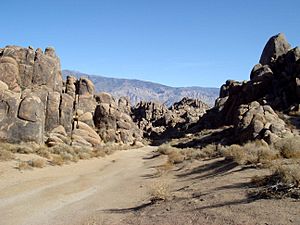 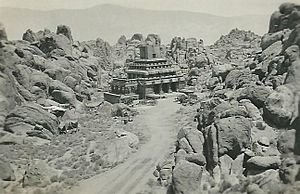 The Alabama Hills were named for the CSS Alabama, a Confederate warship deployed during the American Civil War. When news of the ship's exploits reached prospectors in California sympathetic to the Confederates, they named many mining claims after the ship, and the name came to be applied to the entire range. When the Alabama was finally sunk off the coast of Normandy by the USS Kearsarge in 1864, prospectors sympathetic to the Union named a mining district, a mountain pass, a mountain peak, and a town after the Kearsarge.

The Alabama Hills are a popular filming location for television and movie productions, especially Westerns set in an archetypical "rugged" environment. Since the early 1920s, 150 movies and about a dozen television shows have been filmed here, including Tom Mix films, Hopalong Cassidy films, The Gene Autry Show, The Lone Ranger and Bonanza. Meanwhile, Classics such as Gunga Din, The Walking Hills, Yellow Sky, Springfield Rifle, The Violent Men, Bad Day at Black Rock (1955), the Budd Boetticher/Randolph Scott "Ranown" westerns, part of How the West Was Won, and Joe Kidd. In the late 1940s and early 50s the area was also a popular location for the films of B-western actor Tim Holt.

Alabama Hills features exceptional skies for Central California. It is Bortle class 2 or "average dark sky" site; this low level of light pollution meets or exceeds conditions in many of other popular nearby areas for amateur astronomy, such as Joshua Tree National Park (Bortle class 2–4). On a clear night with no moon, a visitor with good, dark adapted vision may see the Andromeda and Triangulum galaxies with the unaided eye; the central Milky Way appears highly structured under these conditions.

All content from Kiddle encyclopedia articles (including the article images and facts) can be freely used under Attribution-ShareAlike license, unless stated otherwise. Cite this article:
Alabama Hills Facts for Kids. Kiddle Encyclopedia.